Sustainable fish campaigners have presented a report on the Sustainable Fish Legacy from the London 2012 Olympic and Paralympic Games, to the head of the United Nations Environment Programme. 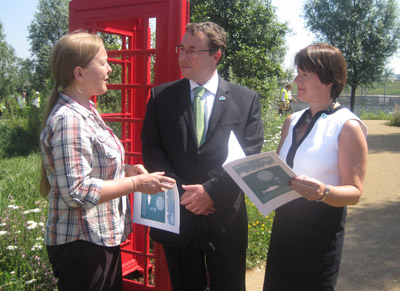 Kath Dalmeny, convenor of the Sustainable Fish City campaign [2], thanked Achim Steiner on behalf of the campaign for the United Nation's vital work in bringing to the attention of the world the crisis facing fish stocks and marine ecosystems [3]. She also congratulated UNEP for adopting a sustainable fish policy for UNEP's own catering for meetings and events [4], and encouraged Mr Steiner to use his influence with other UN bodies to see this policy adopted in many other international institutions.

"Sustainable Fish City and London 2012 [5] have shown that the buying power of large organisations has a crucial part to play in securing the future for precious fish stocks," she said. "The UN's reports on the state of the world's fisheries make sobering reading and give us the impetus to change. This crisis is happening on our watch, so it is a great task for our generation to bring all fisheries under sustainable management and to use the power of food buying by companies, caterers and retailers to accelerate that change."