Michael Gove has bowed to industry pressure to delay UK policy-making on chemicals, pesticides, plastics, clean air and waste, after over 30 trade associations said no deal Brexit preparations are already too time-consuming and expensive. The fate of government’s promised action on child obesity remains undecided. 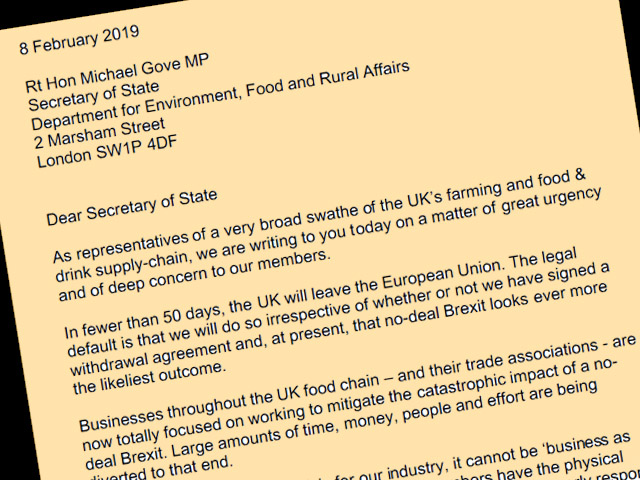 Last week, 32 industry groups across the food and farming sectors wrote to Secretary of State for Defra Michael Gove, urging him to halt all food, farming and environmental policy consultations as a matter of “great urgency”. Signatories included the Food and Drink Federation, the National Farmers Union, British Meat Processors Association, Dairy UK, the Fresh Produce Consortium, and UK Hospitality.

Michael Gove’s response, published by Sky News, said today that the Government had "already decided not to consult imminently on the chemicals and pesticides strategies"; was "exploring options on environmental targets but we do not plan to initiate a consultation on this before summer recess"; and would ensure that three consultations relating to resources and waste - including a deposit return scheme for England and Wales and a tax on plastic items with less than 30% recycled content - would end in May, rather than April. He also indicated that proposals to limit the promotion of junk food and sugary drinks was not a Defra responsibility, but that he had "asked my officials to explore whether changes can be made".

Kath Dalmeny, chief executive of the Sustain food and farming alliance said, “We are sympathetic to the extreme costs and uncertainties posed by a no deal Brexit, a scenario we oppose because it is likely to be so damaging to our food and farming industries. However, it is troubling to see so much domestic policy being postponed by Brexit, at a time when we know that children’s health continues to be at risk, insect populations are in crisis, and action on pesticides, waste, plastics, air quality and climate change grows ever more urgent.”

Barbara Crowther, Co-ordinator of Children’s Food Campaign said last week in response to news of the original industry letter, “Government must hold firm and not succumb to pressure to postpone action to act on childhood obesity, as they promised to do in 2018. As charities and health bodies, we have far fewer resources than these massive food companies, and yet we are working hard to respond to all the government consultations. It’s up to them if they want to do the same. Government should not be bribed to delay its action on sugar.”

The industry groups stated in their letter that “Businesses throughout the UK food chain – and their trade associations – are now totally focused on working to mitigate the catastrophic impact of a no deal Brexit,” and that, “Large amounts of time, money, people and effort are being diverted to that end.” The letter argued for a delay in food and drink-related policy consultations, including those on: