Responding to a complaint by the Real Bread Campaign, the Advertising Standards Authority (ASA) has given the opinion that the frozen food chain’s ‘crafted using only the finest ingredients’ advertising claim for additive-laden loaves is not misleading ‘because “finest” had no defined meaning’. 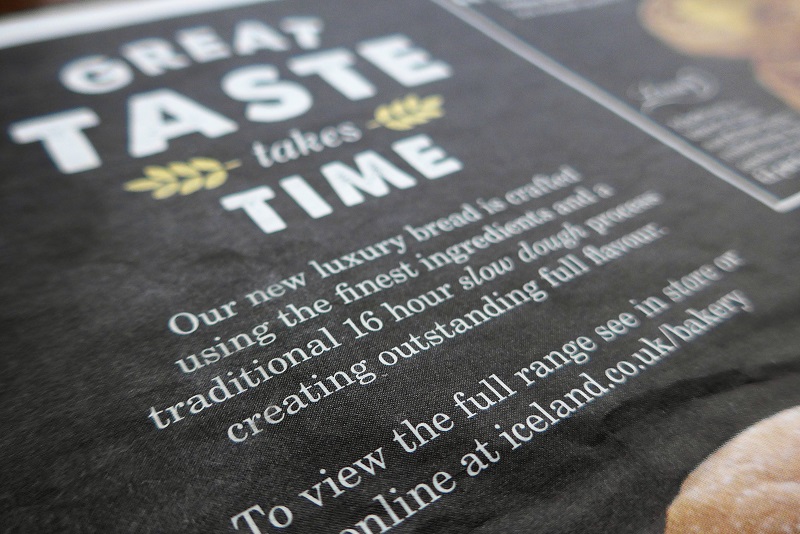 After a four-month investigation, the ASA ruled on 13 December 2017 that Iceland advertising factory loaves, manufactured using artificial additives and baker’s yeast, as: ‘crafted using only the highest quality ingredients […] using a slow dough method (typically know as sour dough [sic.])’ was not misleading.

Responding to the rejection of the complaint, Real Bread Campaign coordinator Chris Young said “We are deeply disappointed at this decision, which yet again underlines the urgent need for an Honest Crust Act to protect shoppers and the owners of the small independent bakeries that help to keep our high streets alive.” He added: “Without improvements in advertising and labelling law, it seems that what we see as hijack marketing by industrial loaf fabricators and retailers using language more appropriate to Real Bread bakeries will continue to go unchecked.”

Are artificial additives ‘traditional’?
As the Real Bread Campaign’s complaint noted, products in the Iceland range are not made using only traditional methods and food ingredients; industrial methods and a large number of artificial additives are used. They include: mono- and diacetyl tartaric acid esters of mono- and diglycerides of fatty acids; mono- and diglycerides of fatty acids; calcium propionate; ascorbic acid; sodium, potassium and calcium salts of fatty acids; potassium sorbate; calcium stearoyl-2-lactylate; calcium phosphates, sodium alginate; diphosphates; calcium sulphate and unspecified ‘flavourings’. Some have added colouring, dried gluten added for strength or even dried sourdough powder for flavour and tang. The Real Bread Campaign asks: Would any of these be found in Real Bread, particularly that which is truly crafted in a traditional way using only the highest quality ingredients?

Sourdough or sourfaux?
On the 'sour dough' [sic.] claim, the Real Bread Campaign believes that, at most, a very small percentage of the flour in the Iceland loaves might be fermented with a live sourdough starter culture for an appropriate length of time, before being added to the bulk of the ingredients. Rather than then being fermented for many hours (as happens in genuine sourdough and all other truly traditional slow dough methods), it seems that the bulk of the dough in the advertised products undergoes a relatively short and fast fermentation using added baker’s yeast.

Is it fresh?
The Real Bread Campaign asks: Is ‘delivered fresh’ the type of phrase that Food Standards Agency guidance advises should be avoided on account of potentially having ‘an emotive appeal but no real meaning’? Unlike Real Bread that is baked and sold the same day to be eaten whist still naturally fresh, several products in the advertised Iceland range contain the preservative calcium propionate to make it have a longer shelf life. How can a product be marketed using the word ‘fresh’ when it is laced with an artificial preservative?

The Real Bread Campaign is asking people to sign (or write their own) letter to the Secretary of State for Environment, Food and Rural Affairs, Michael Gove, urging the government to improve the protection of protect shoppers and small businesses with better loaf labelling and marketing legislation.

In promoting its ‘Luxury Bakery’ range, the Iceland website claimed: ‘Crafted using only the highest quality ingredients, these new luxury breads have been created using a slow dough method (typically know as sour dough) [sic.] to create rich, intense flavours. During this process, the ingredients can ferment for up to 16 hours and although this may take a little longer, the wholesome, greater flavours are worth the wait...’

A print advertisement claimed: ‘Our new luxury bread is crafted using the finest ingredients and a traditional 16 hour slow dough process creating outstanding flavour.’ It also stated that the products are ‘Delivered fresh every day.’

‘considered that consumers would interpret the claim that the bread was “delivered fresh every day” to mean that Iceland Foods took daily deliveries of bread that had been newly baked [rather than expecting] every loaf of bread being sold in the range to have arrived in the store that day.’