London households throw away an estimated 910,000 tonnes of food each year, of which 640,000 tonnes could have been eaten. Not only is this environmentally damaging but it’s a huge waste of money for consumers, local authorities and businesses.

It costs consumers £1.4 billion per year to purchase the food and drink thrown away in London, generating the equivalent of 2.1 million tonnes of CO2 emissions. These eye-opening figures demonstrate the mighty hurdle that the TRiFOCAL London project is currently working to address. TRiFOCAL is a €3.2 million project funded by the LIFE programme of the European Union which addresses three key areas – healthy sustainable eating, preventing household food waste and recycling inedible food waste. TRiFOCAL is delivered by project partners WRAP, the London Waste and Recycling Board (LWARB) and Groundwork London. The project started in 2016 and completes in January 2020.

Trifocal has worked with 15 London boroughs to deliver localised campaigns to closely monitor whether the messages and campaign activities are reaching residents and are understood. All boroughs with a separate food waste collection service were invited to participate in either the ‘test and learn’ phases and/or the final roll-out wave in October 2019.

In order to optimise the campaign’s messaging, tone and style, Trifocal adopted a ‘test and learn’ approach across the first three waves, with each wave made up of delivery and then evaluation activity in 2-3 London boroughs. The feedback and learnings from each wave informed the direction and recommendations for subsequent waves; the sum of all the learnings has been incorporated into the final campaign week referred to as ‘wave 4’. 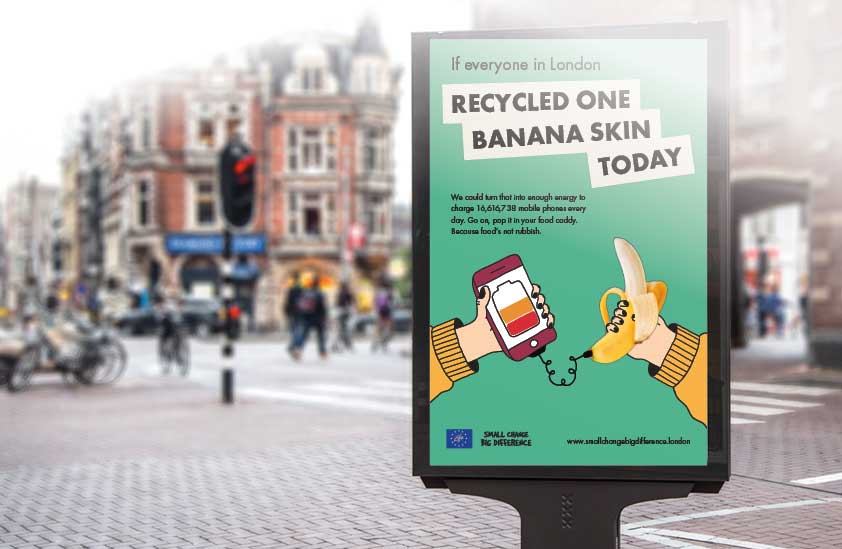 Focus groups after each wave were key to this approach. The focus groups were set up to collate insights from the target audience on the effectiveness of the campaign in their borough (test) and identify potential improvements (learn).

Focus group participants provided feedback on the campaign based on what they had seen, remembered and understood.  The Small Change, Big Difference campaign identity and messages were then refined to better resonate with the target audience, helping make the campaign more impactful.

For example, insights from wave 1 focus groups suggested that the initial design would appeal to a much younger audience than the target audience of 18 to 35 year olds, so the designs were tweaked to be brighter and bolder to appeal to a more millennial audience. Wave 2 focus groups were generally very positive. Trifocal made further minor tweaks related to more direct language and bringing out the ‘call to action’ more clearly when passing on a bus for example.

You can see the evolution of the Small Change Big Difference messaging on the food waste prevention posters pictured on these pages.

Feedback from the final focus groups reported that some participants had made changes such as freezing bread, eating less meat, wasting less edible food and recycling more.

Our learning paved the way for a final roll-out phase (wave 4) across London. This drew on the results of the test and learn approach through a focused campaign week, consisting of events, out of home advertising, PR, digital and social media activity. The campaign week was London wide, with further localised activity in 12 London boroughs.

As a family we are incorporating more left overs into meals to reduce our waste […] We started off doing a few bits with what we saw directly from the campaign but have now started to incorporate it in day to day meal times.
(Female, London)

As well as engaging with households, TRiFOCAL has also worked with community groups and schools.
Workshops and training tested a community level response and the ability of individuals and groups to break down big issues into achievable ambitions and projects. This involved learning through interactive group activities from cooking to planning home and community actions. To support community leaders in bringing about impact in their local community, a resource pack containing activities, discussion topics and materials, is now available on the TRiFOCAL resource bank.

A curriculum-based programme has been developed for use in primary schools which has had impact on in-school, and out of school family behaviours. The programme includes a series of lessons, a food waste audit and campaign days to engage pupils and the wider school community in the key messages of the campaign. Learning has been shared via film, case studies and video link-ups between London and EU schools.

A resource pack aimed at schools and teachers has been developed for programme replication which includes downloadable session plans with accompanying resources as well as teacher guidance, tips and case studies from schools across London on how to engage with the wider school community. It also features video footage of activities such as conducting a plate waste audit, smoothie making and a campaign day in action.

TRiFOCAL closes in January 2020, so the organisers want to ensure that the campaign materials, resources and messaging are accessible for future initiatives. The outputs from the project are available on the TRiFOCAL resource bank, a platform on which is shared evidence, guidance and examples of campaign materials piloted in the project, both in London and in replication cities.

Trifocal encourages citizens, businesses, local authorities/municipalities, schools and community groups to use these resources and help influence positive food behaviours. Please contact trifocal@wrap.org.uk  before using these resources if you are planning a campaign, or if you have any questions regarding the use and licencing of the ‘Small Change, Big Difference’ campaign identity.

Good Food For London: How London boroughs can help secure a healthy and sustainable food future