Orchards and agroforestry - big green ideas to tackle the climate and nature emergency?

I was asked to give a presentation on orchards and agroforestry for an RSPB webinar on ‘Nature in the Green Recovery: Big Ideas for where Nature-Based Solutions can go next’. The task was formidable to deliver a 4-minute presentation, on the science, opportunities, and barriers to this nature-based carbon solution. This blog explores these in more detail and how, alongside agro-ecological farming, we can gain win wins from ‘food trees’ for climate and nature. [1] 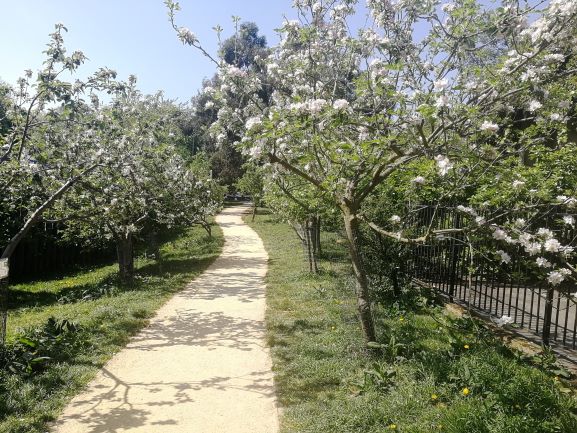 My premise is that if we want to plant many thousands of trees for carbon and nature benefit, we should invest in good orchards and agroforestry. This includes protecting, restoring, and creating new, traditional or ago-ecological orchards and supporting farmers in using agroforestry approaches. Should this be part of UK plans for major afforestation? Possibly. They could play a significant role and they come with major co-benefits.

A few notes on the carbon sequestration. Atmospheric carbon (C) is absorbed as carbon dioxide by plants via photosynthesis. Some is lost as the plant respires and the rest is incorporated into organic matter and used by the plant to create new plant mass. This roughly represents the net primary production (NPP) above and below ground. Carbon losses also occur through the organisms and processes in the soil affected by the trees especially when first planted.

Orchards – fruit, nut and wine grape – can be plantation monoculture,  traditional old orchard and everything in between. The co-benefits of more fruit trees include: enterprise, incomes and jobs; nutritional security by replacing the 90% of fruit that we eat that is imported; and public health via delivering more fresh and diverse produce possibly closer to the market. Community based orchards can additionally offer considerable benefit of community cohesion, biodiversity, access to nature and mental and physical wellbeing.[2]

Traditional orchards are defined as groups of fruit and nut trees planted on vigorous rootstocks at low densities in permanent grassland habitats and managed in a low intensity way. Organic orchards are similarly low intensity and can deliver significant carbon and biodiversity benefits as with all organic production, managed with significantly fewer chemicals which means more wildlife - particularly insects. This contrasts with high density monoculture fruit and nut plantations which have more carbon stock but are thirsty, require agrochemicals, and are regularly replaced, disturbing soil carbon.

Fruit and nut tree systems can fix significant amounts of carbon, but the UK potential has been poorly explored. A 2012 Natural England study showed variable outcomes.[3] Elsewhere in the world studies have found convincing evidence of carbon sequestration from orchards. One Italian study [4] measured the balance of carbon stored and exchanged in various orchard types including the spoil carbon. It showed that mature fruit tree orchards had a net ecosystem C balance storing carbon and contributing negligibly to emissions. Another study found that soils in the top 30cm in a traditional orchard contained 74 t C/ha compared to 26-34 t C/ha in arable soils.[5]

Organic orchards will potentially store more C given the management approaches which protect soils and recycle fertility. One study in Spanish fruit trees [6] showed an average 56% decrease of greenhouse gas emissions under organic versus conventional on an area basis. On a product basis, greenhouse gas emissions decreased by 39% on average so per fruit there was a major cut in emissions. These can be explained mainly by carbon sequestration in soils, which is due in turn to higher C inputs by cover cropping and incorporation of pruning residues.

Fruit tree orchards also produce considerable residual biomass as the trees are pruned. This can be used for soil conditioning, animal feed, or for energy generation (ideally on site).

Alongside the co-benefits mentioned above which would help sustain orchard viability and community support, the C sequestration and production of food with low emissions suggest considerable benefits from a major growth in sustainable orchards across the UK. This should be in rural, peri-urban and urban land.

Trade-offs will need addressing but overall, this looks like a huge opportunity. Barriers will be access to land, investment finance for initial planting and on-going management and, the biggest of all, poor returns and unreasonable demands (for perfect, cosmetically uniform produce) from the market. Our current retail chains are fiercely competitive and cheap imports are hard to compete with.

The aim of agroforestry systems is to optimise farming systems by incorporating woodland into them rather than replacing grazing or cropping land with trees.  There are different types including with livestock (silvoculture), trees within arable, hedgerow trees.

Planting trees in farm systems improves grass growth, protects against flooding and topsoil erosion, increases farmland biodiversity and animal welfare, provides a source of shelter for livestock, fodder too as ‘tree hay’, and has been proven to enhance productivity.[7]  And if the trees are used for fruit, nuts, livestock fodder, biofuel or timber they can provide additional farm income. There is a huge wealth of knowledge building on this approach and lots of claims too – as with forestry.

The government has committed to increasing tree planting to 30,000 hectares per year by 2025 and provide farm carbon woodland funding.[9] But progress is glacial.

This is a very quick review, but it is clear that the careful planting of more trees via traditional or organic orchards and agroforestry could lock in more carbon. This will also deliver so many great health, wellbeing, economic and wildlife co-benefits that they are bound to be maintained, well used and well loved.

A few proposals to get this going:

1.A phrase used by Baroness Bryony Worthington to me when discussing agro-forestry for the Agriculture Bill

2. See  https://www.theorchardproject.org.uk/ which is about he creation, restoration and celebration of community orchards.