How can levelling up bring obesity rates down?

Two contrasting food policy stories have been circulating in the last 24 hours that have left campaigners not knowing whether to cry with joy or frustration. On one hand the Levelling Up paper has announced some long overdue monitoring of school food standards and support for food teachers and governors. On the other the White Paper’s aims to level up health seem to be falling on deaf ears elsewhere with fears the Government will try to water down some of its flagship obesity policies that have recently been making their way through Parliament. Ben Reynolds finds out more about what is going on. 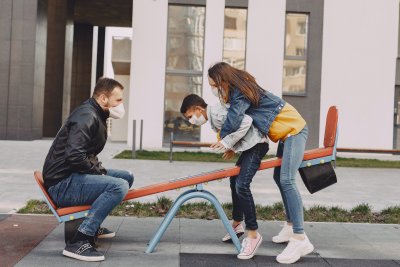 Family in masks on see-saw. Credit: Photo by Gustavo Fring from Pexels

There’s rarely a dull day in a food campaigner’s job, but this week’s developments would have been hard to predict by any standards. Seemingly out of the blue, bar for a few on the inner circle, the Government has finally seen sense and committed to pilot monitoring of school food standards, something that Sustain and its alliance has campaigned on for years. This is down in no small part to the School Food Review (including our Children’s Food Campaign and many Sustain members), and a welcome power grab from the Food Standards Agency keen on increasing its truncated remit. This development comes alongside commitments to support a criminally underfunded cohort of food teachers and arming governors to better support a whole school approach to food and report on their progress.

But this was not the first thing that one might expect to see around food in the context of Levelling Up. Sustain and many of our members have been keenly awaiting the announcement of the UK Shared Prosperity Fund, which opens in April and is meant to be a cornerstone of the Levelling Up agenda. Its predecessors, the pilot Community Renewal Fund and Levelling Up Fund put millions into local food projects, and the hope is that the new Fund will help meet a desperate need for better infrastructure to support local and farmer-focused supply. As Sustain’s Head of Farming, Vicki Hird says:

"For consumers to get affordable, healthy food from local, sustainable farmers we need new supply chains, better food infrastructure and new retail opportunities. This should really be a priority for the new innovation and investment funds -  gaining new skills, jobs, better routes to market and better consumer choice. "

Whilst we’re still digesting what opportunities are in the Levelling Up paper for farmers, local food systems and decision making, what is clear is that in the midst of a cost of living crisis one might at least expect the Levelling Up paper to increase entitlement to free school meals, as Sustain colleague, Children’s Food Campaigner Barbara Crowther points out:

“We are pleased that National Food Strategy recommendations on monitoring School Food Standards and piloting Community Eatwell programmes have been taken up, but there is no recognition of the huge disparities of access to school food that leave 1 in 3 children in poverty not eligible for free school meals. The Government’s white paper on food in response to the National Food Strategy must address this glaring gap. Whilst all primary school children in Scotland and Wales will start to enjoy universal access to healthy school meals, children in England and Northern Ireland risk being left behind.”

“Levelling up won’t be possible unless we address health inequalities. Food insecurity and obesity prevalence, both worryingly high even before the pandemic, have risen sharply in the last two years.  The White Paper notes the role of healthy diets and access to nutritious food, but then fails to acknowledge the importance of the Government’s current obesity strategy in terms of healthy food reformulation, fiscal interventions and regulations to stem the tide of junk food marketing and promotions. The Government must not waver from these courses of action.”

Rather, using the cost of living crisis as an excuse, and to pander to a tiny handful of noisy backbenchers in order to save his job, the Prime Minister has appeared to wobble on commitments to restrict junk food promotions, according to leaked reports of recent meetings with Conservative MPs. A flagship policy in the obesity strategy that he himself launched, that enjoys widespread political and public support, and was approved by Parliament as recently as December 2021.

What makes this even worse is that it would do nothing to alleviate the plight of those who are most struggling as all the evidence suggests the targeted promotions like Buy One Get One Free encourage people to spend more money, and on unhealthier food at that. Let’s not forget that healthy foods and store cupboard staples, like fruit, veg, baked beans, rice and pasta will not be touched by the new regulations.  Instead the planned restrictions would encourage companies to shift their promotions to healthier products which would be a win win for everyone.

Fundamentally, every public poll shows that people want healthy food to be cheaper than unhealthy food. Only those companies with bulging vested interests in junk food marketing have anything to fear, and the government must continue to resist their persistent pressure to influence public health matters. When it comes to the obesity strategy, to paraphrase the Prime Minister himself, we’d like the Government and Parliament to just get the job done.