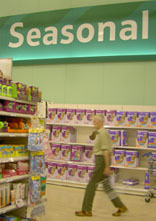 Sustain has witnessed, and indeed participated in, several major projects over the years to attempt to improve the health and sustainability of supermarket products and marketing practices, for example:

Reports of Sustain's involvement in some of these initiatives can be found using the update links in the menu on the left. They show how much effort public interest groups have put in over the years, to encourage, cajole or sometimes force supermarkets to improve their products and practices. Some supermarkets have responded, and some ground has been gained.

Given this slow progress, we remain opposed to voluntary approaches. Supermarkets operate in a highly competitive market and selling more remains the dominant driver - to the detriment of people's waistlines and the environment. In this situation, it is difficult to see how we can shop our way out of the problem, alongside weak regulation, lame educational initiatives, misleading food labelling, and a sprinkling of greener products sold at a premium.

Many of Sustain’s members have a range of concerns about supermarkets and are part of the Friends of the Earth campaigns Breaking the Armlock coalition or Tescopoly.  See these links for more details.