In 2017, Khaled Galal won the Real Bread Campaign and flatbread categories of the World Bread Awards with his Egyptian-style loaves. 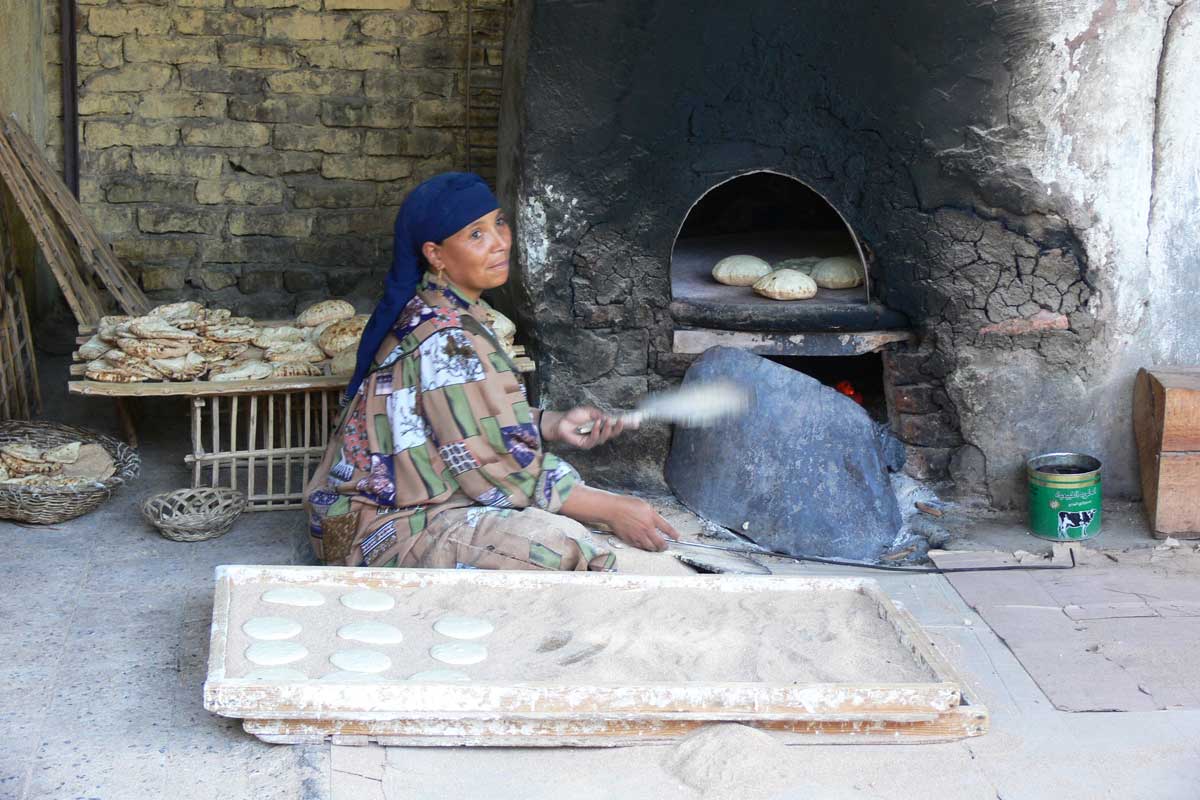 As a child, visiting a traditional bakery in Cairo was always an exciting experience. My eyes would roam around the large spaces where the skilled bakers prepared the aish baladi (baladi bread) dough. I was particularly fascinated by the skill of the man who divided this ultra-hydrated sticky dough at an impressive speed and lay each accurately shaped portion on a large bran-lined wooden tray for further proving. I would sneak a peek at the room dedicated to mixing and watch two men working the dough with long sticks in large round wooden containers. The wood of these tubs absorbed the natural yeast, which usually was enough to ferment the new batch.

As time passed, I witnessed the transformation of Egyptian baking, from loaves and flatbreads crafted by true artisans, to mass-produced loaves that probably only resemble the original versions in shape and name. The sharp rise in population placed increasing demands on bakeries and they were unable to cope using the traditional methods. Rather than developing ways to increase production, while maintaining the integrity of the bread, the dough’s hydration level was reduced, affecting the bread’s crumb structure and texture.  White bleached flour was introduced to appeal to the aspirations of customers as was the use of chemical improvers and commercial yeasts instead of the natural sourdough starter, meaning that aish baladi essentially lost all its fundamental characteristics. All that was left was the name.

Moving on in life, I pursued a career in branding and creative communications, working for international advertising agencies and consultancies in the Middle East and London. I specialised in museums and cultural projects, supported by my academic studies and research in the fields of architecture, communications and globalisation. Throughout this journey, I remained passionate about the cultural dimension of food, culinary art and craft. What is clear to me is that the cumulative wisdom of our collective historical culinary legacy can offer a variety of inspirations and innovations for healthier and more mindful food, which can improve our lives and societies today. This was to be the key driver behind us starting our business, Baladee, with a focus on reviving aish baladi and introducing it to Britain.

Our Baladee is a development on a series of Egyptian loaves that date back to ancient times. It is a blend between the ancient shamsi bread and the more modern aish baladi. Shamsi (sun) bread was typically shaped as a round, 20-25cm in diameter by 4cm deep, to resemble the sun as a tribute to the ancient Egyptian sun god Ra. It is arguably the earliest form of sourdough bread. It used to be leavened in bran-coated concave clay dishes in the warm and very low-humidity air of southern Egypt. This invigorated the natural yeasts in the dough, while dehydrating its surface, giving the bread its distinctive crust texture. Later, aish baladi emerged as the mainstream bread in the growing Egyptian metropolis due to high demand and population growth. It inherited many of the characteristics of the ancient shamsi bread but as it evolved - probably for culinary practicality - baladi became thinner and eventually took the shape of a pocket bread.

Our Baladee loaf maintains the key characteristics and crumb structure of the slow-leavened shamsi sourdough and marries them with the practicality and versatility of baladi. We use organic, wholemeal wheat flour, given an added dimension by the addition of khorasan wheat, which was cultivated across the Middle East during ancient times. This doesn’t only strengthen the bread’s connection with its historical roots but also adds a creamier texture, a slightly nutty flavour and substantial nutritional value.

We believe that Baladee bread offers Britain a loaf that is unique in many ways. It is not a short-process flat bread, but a fully-developed loaf that benefits from slow dough development to create its texture and flavour. It is also a versatile pocket bread that can be used for anything from sandwiches to panini, to our favourite - the Baladee croque monsieur.

Winning two World Bread Awards – and the Real Bread Campaign category in particular - with our Baladee loaf was significant to us in many ways. It increased our commitment to our path of researching, reviving and introducing breads that are inspired by the culinary wisdom of the past but still provide innovative, practical options for now and the future. It is also an indication that what was once real can be real again to be celebrated and enjoyed. I believe it is not solely about Baladee bread, it is an opportunity for Egypt – a sourdough pioneer - to restore its baking legacy. It is an opportunity for all bakers to rediscover the wisdom of the past, blend it with modern innovations and introduce breads that are original, novel and mindful to our health, economy and society.