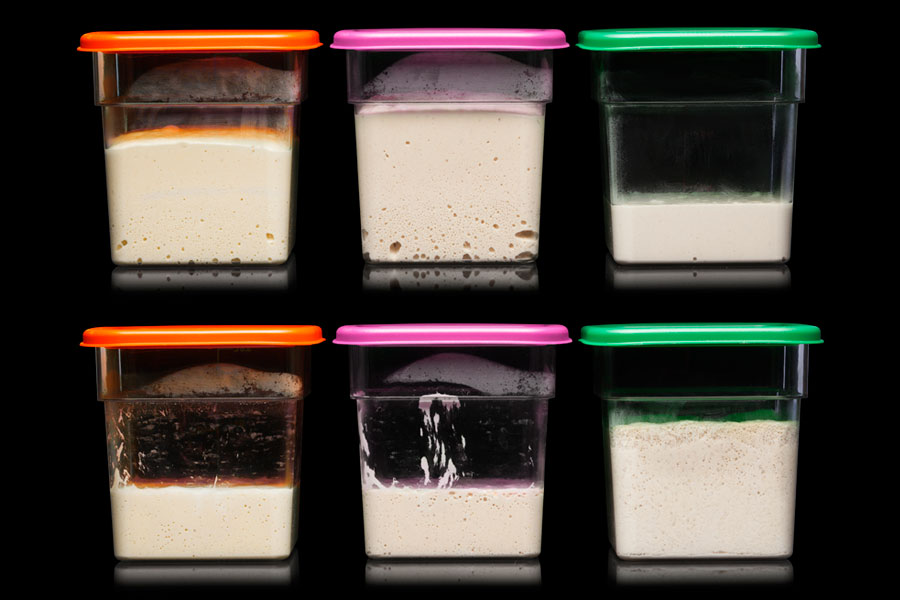 Some bakers are devoted to the idea that raisins, pineapple juice, or yogurt can accelerate a levain’s development. On its surface, this idea sounds plausible.

Yeasts occur naturally on many fruits, especially grapes, because the microbes thrive wherever there’s sugar. It’s also present in many fermented foods. What’s more, many fruit juices, in addition to being sweet, are acidic, which gives yeasts a competitive advantage over microbes that aren’t tolerant of low pH.

Examined empirically, however, the theory falls apart. Our experiments showed it didn’t save time to add fruits or similar accelerants to flour and water when starting a levain. In every case, our levains were ready to use in no less than 5 days. From what we know about yeast and sugar, we can see why the evidence doesn’t support the folklore, or even the beliefs of many prominent bakers, that adding fruit makes a difference.

In general, the best bet is to begin a starter using the same food that yeasts will eat over the long term. Doing otherwise is little more than a bait and switch, because not all sugars are the same. So if you want your levain to eat the sugar components of starch—which you do when making most bread—you should feed it starch right from the beginning. If you also consider that flour already contains yeasts well-adapted to start the fermentation process, you’ll see that it’s best to just start by feeding it flour.

While it’s true that an initial burst of sugar will enliven a levain (evidenced by increased volume), that’s little more than a quick sugar fix. This initial boost isn’t relevant to the levain’s ability to sustain itself and produce carbon dioxide in your dough. This practice stands in contrast with our sweet-and-sour levain, which we feed sugar along with the flour and water after the levain culture has been established. This encourages the survival of yeasts that thrive in doughs with high sugar content.

Yeast and lactobacillus from other sources

When people use fruits in a levain, they assume that the wild yeasts on their fruits — the powdery blush on grapes for instance — will benefit the starter. They don’t consider the different strains of yeast. The time it takes for grape-loving yeasts to adjust and make good use of the flour (if it ever properly does) is almost counterproductive because the microorganisms in the culture must readjust to the new food source.

The yeasts that colonize grapes are better suited to making a cuvée sauvage wine than a quick levain. The same is true of the lactobacilli in yogurt; they are bred as a monoculture to feed on lactose (the sugar in milk), so they are not well-suited for fermenting dough. The yeasts that exist in grain and are already in your flour are best for making levain.

You don’t need to inoculate your culture

We tested several types of inoculated water to see if they helped develop levain more quickly. We even pressure-cooked raisins to sterilize them before inoculating the water to see if it was the microbes or the sugar that made the levain ferment. The results were much like the tortoise and the hare. The levains made with raisin water bubbled sooner and higher. (In fact, the batch made with sterilized raisin water peaked first, proving that the microbes from the raisins weren’t a factor. Instead, the microbes in the flour were gorging on the broken-down raisin sugars.) But it’s a mistake to think that fast bubbling makes for a fast levain. All our test levains reached maturity at about the same time regardless of adding plain raisins, pressure-cooked raisins (which contain sugar but no living microbes), a combination of glucose and fructose, or nothing at all.

Also contrary to conventional wisdom, we found no evidence you can reduce starter development to just 2 days by swapping out the tap water for infused water in which fruit has steeped. This method works only if the fruit was first soaked in water for 3 days beforehand, so the total process still takes 5 days.

Some bakers claim that adding fruits or juices affects the bread’s flavour, but again we disagree. Very little fruit is added, and any flavour from it becomes further diluted with additional backsloppings. Such an accelerant would have to be potent—like an essential oil—to be perceptible in the baked loaf. If fruit flavour is what you’re after, just add fruit juice into the dough in place of some of the water.

We tested the idea, popular among some bakers, that raisins or other fruits speed the development of a levain. We compared a regular flour and-water levain to a second batch made using raisin water and to a third made with pressure-cooked raisin water. Both of the raisin-infused batches bubbled faster, but that initial sugar buzz subsided quickly, and it wound up taking the same amount of time to produce a mature levain. The third batch, which was sterilized in the pressure cooker, proved that it isn’t the microbes that make the levain rise. Instead, it’s the sugars, which were broken down in the pressure cooker and therefore more readily available. But in the long run, adding fruit to your levain does little more than waste perfectly good fruit.

Taken from Modernist Bread: The Art and Science by Nathan Myhrvold and Francisco Migoya © The Cooking Lab. Reproduced here with kind permission of the publisher.