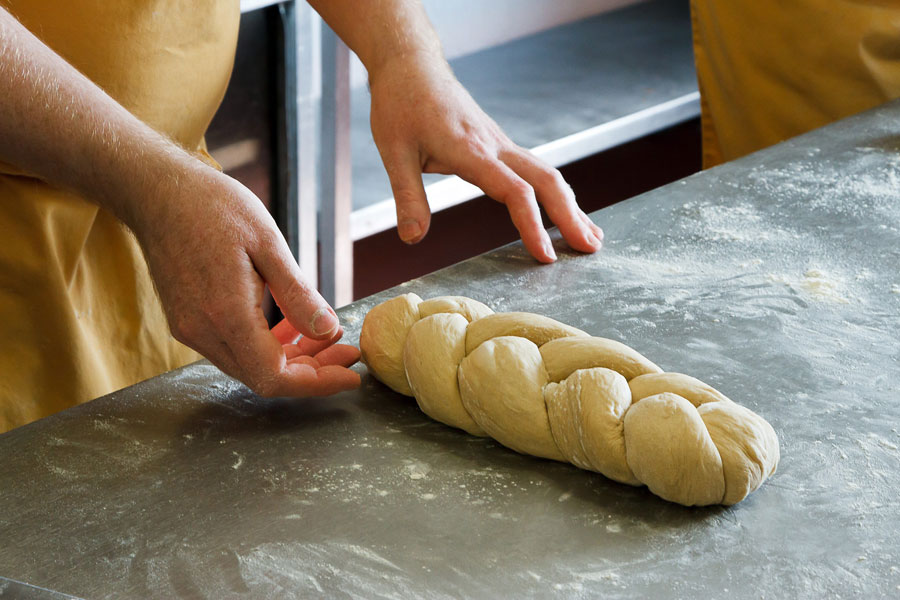 I grew up in a traditional Jewish house, where the rhythm of the week was punctuated by the Friday night Shabbat meal, central to which was challah. When I was young, my mum would bake kitke, as we called it, every week and our house in Johannesburg would be filled with the yeasty, rich notes of this enriched bread. Hers was plaited from three strands of dough, said to represent peace, truth and justice, although some bakers bake two six-stranded loaves to represent the Twelve Tribes of Israel. For Rosh Hashanah, the Jewish New Year, mum would form the challah as a round, spiral loaf, symbolising the cycle of the year. She would often use extra dough to make bulkalach, a bun dotted with fruit and spiced with cinnamon. On the holiday of Purim the same dough was used to make sweet pies known and hamantaschen.

When I was in my teens, mum started working and home-baked challah became an occasional treat. My maternal grandparents would bring us challah from Kaufies, a kosher bakery opposite our synagogue and up the road from my school. Its steamy windows, enticing smells and overfilled bagels were a constant torment during my hungry teenage years.

In the early ‘90s, my family moved to London, where we discovered Jewish bakeries including the indomitable Carmelli Bakery in Golders Green and Roni’s Bagel Bakery in West Hampstead. As a stranger in a strange land, they felt immediately familiar; their smells, bustle, less than gracious service - and of course their bread - all made me feel more at home.

While there are many references to a Sabbath bread in the Torah, the iconic woven bread we now call challah can be traced to Medieval Germany, where the decorative plaited bread barches was adopted by local Jews. Making plaited challah became engrained in central European Jewish culture and then spread around the world from the mid 19thcentury as emigrants took their baking culture with them.

Depending on who you ask, the word challah derives either from the term for donating a portion of bread paid as a tithe to the priests, or from a word for a cake. Many observant Jews still make an offering of a ritually-burnt portion of dough to God before baking the challah. In kosher law, one does not mix milk and meat and thus traditional challah is pareve (or parve - dairy-free) so that it can be served with any meal. Before the mid-19th century, challah would have been made with a coarser flour, sweetened with honey and leavened with a sourdough starter. These days, it is usually made with refined wheat flour, sweetened with sugar and leavened with baker’s yeast.

I spoke to several bakers about their technical approach to challah and what it means to them. The Lighthouse Bakery’s American-born founder Liz Weisberg only bakes around ten challahs per week “as there are very few Jews in the wilds of rural East Sussex.” She makes a straight yeasted dough at a low hydration, with a long bulk ferment. She favours a four-strand plait which is made on a Thursday night and retarded until Friday morning when it is egg washed and baked.  Liz says that “I learnt to bake challah as a child at a Hebrew school. It makes me feel part of a historical continuum which reinforces my Jewish roots and culture.”

In Hampstead, Karma Bread is one of a growing number of modern bakeries that follow many of our traditions but aren’t certified kosher.  Founder Tami Isaacs Pearce, known to customers as ‘The Challah Queen’, started baking as a therapeutic endeavour, which evolved into a business. Tami says “We pride ourselves in a moist, sweet challah, made from yeasted dough, highly enriched using good eggs with extra yolk. I bend and blend traditions, for example creating a stollen challah at Christmas, pumpkin challah for Thanksgiving, and a pecan, honey and apple challah for the Jewish New Year. My customers are not predominantly Jewish and our delicious and elaborately plaited challahs are loved by every pocket of our melting pot community.”

Michelle Eshkeri, founder of Margot Bakery in East Finchley, makes sourdough challah with organic ingredients, “offering a unique product in terms of flavour, quality and nutrition, which positively challenges people’s expectations of even the most familiar of breads.” She says: “As a Jewish baker, preparing and baking challah on a Friday is as intertwined with the rhythm of my week as it is for many of our customers who are also friends and neighbours. The bakery is an extension of my own kitchen. I used to bake challah every week for my own family and now I get to share it with more people!”

On the kashrut issue, no meat or shellfish are used in the bakery and the challah is dairy free but for either to be certified as kosher, “we wouldn’t be able to use such high quality ingredients and my husband would have to switch the oven on for me every day!” When a customer asks, I explain this to them and it is up to each person to decide whether it meets their needs.”

I also approached a large, commercial, kosher bakery in London, but they were less than forthcoming. All they would tell me is that they are certified by the Beth Din, whose remit is to ensure that food is produced in accordance with kashrut guidelines, including the ritual blessing of challah.

Having worked with food and community organisations for nearly two decades, I’m acutely aware of the role bread plays as a centrepiece of the multifaceted cultural smorgasbord of our postmodern existence. The bread of my youth is the bread of my family and my tribe. It is the cultural signifier that connects me to a legacy of tradition that goes back thousands of years. This legacy weaves together the cultural and historical strands shared by our diasporic communities. Having said that, challah’s an easy bread to make and utterly delicious regardless of one’s cultural or religious background.

Robin runs the Lewes Community Kitchen and is the founder of Community Chef CIC.