A potted history of Stanway Mill from its current custodian, miller Mike Lovatt. 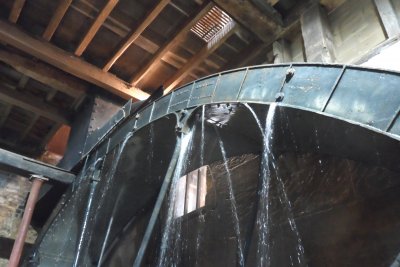 I run Stanway Watermill in the Cotswolds. There’s nothing particularly unusual about that, but the background and equipment used in the mill may well be unique.

The mill is one of four that existed back in the 1300s on the Stanway Estate. It was originally used for fulling*, before being converted to a corn mill when the wool industry began to collapse in the 1500s. In the 1800s, it was again put to new use, becoming the estate’s timber sawmill.

It eventually fell into disuse in the 1950s and, with the exception of the waterwheel, all of the machinery was ripped out. The building then slumbered until 2002 when the present owner, the Earl of Wemyss and March, financed a complete rebuild as a cornmill.

As there was no machinery left, an entire drive train from the waterwheel to the millstones had to be made from cast iron using wooden patterns. Two pairs of abandoned French burr millstones were found in Yorkshire and these were rebuilt and dressed. Grain bins, flour grader, elevator and sack hoist, staircases, window frames and a new Cotswold stone roof completed the job and after eight years’ work, the mill finally began to grind grain again.

My own involvement with the mill started about half way through the restoration. I just turned up at Stanway one day and offered my services. Being a mechanical engineer by trade, I have always been hopelessly addicted to watermills, and worked on a number over the years.

After some entirely justified suspicion on the part of the two millwrights working on the mill, I gradually got given more interesting and challenging engineering and carpentry jobs. When the work was finished, I remained and subsequently became the miller, maintenance man, flour seller, guide and general dogsbody.

Lord Wemyss’ original remit was to operate the mill simply for demonstration and educational purposes, but you cannot run a mill without producing something. What we produce is flour, made from Solstice or Gallant wheat grown by an estate tenant farmer a mile away. ‘Serious’ bread makers buy the flour at the mill, people can also pick it up at local farm shops and delicatessens, and we supply a few local restaurants and pubs as well.

Early on it was decided to put in a grader so we could sieve the flour to produced 00 grade white flour as well as wholemeal.  The bran or husk goes to the local horses or pigs, in exchange for the occasional parcel of pork sausages!

It has been a steep learning curve.

I picked the brains of colleagues and friends in the milling world, relied on a mixture of instinct and trial and error and changed direction several times, brought about by needing to meet a raft of safety and hygiene regulations. It has been a major challenge to produce flour in an ancient building, a constant battle to keep the machinery running and clean, keep a lot of visitors and school children safe and happy, keep a constant supply of wheat, brochures, paper bags and sacks, keep a website running, organise pest control visits, alarm and fire control systems, do the accounts, organise volunteer helpers and promote the mill at local food festivals etcetera, etcetera…

But, make no mistake, I enjoy every minute of it, and consider it a privilege to be able to run a machine that uses no fossil fuel and produces one of mankind’s basic foods entirely naturally.

*Fulling is an ancient method of cleaning and strengthening woollen cloth by pummelling it with a mixture of fine clay, known as fuller’s earth, and water.