Lisa Asuncion explores some of the basics to help novice (and some experienced) bakers understand what’s going on. 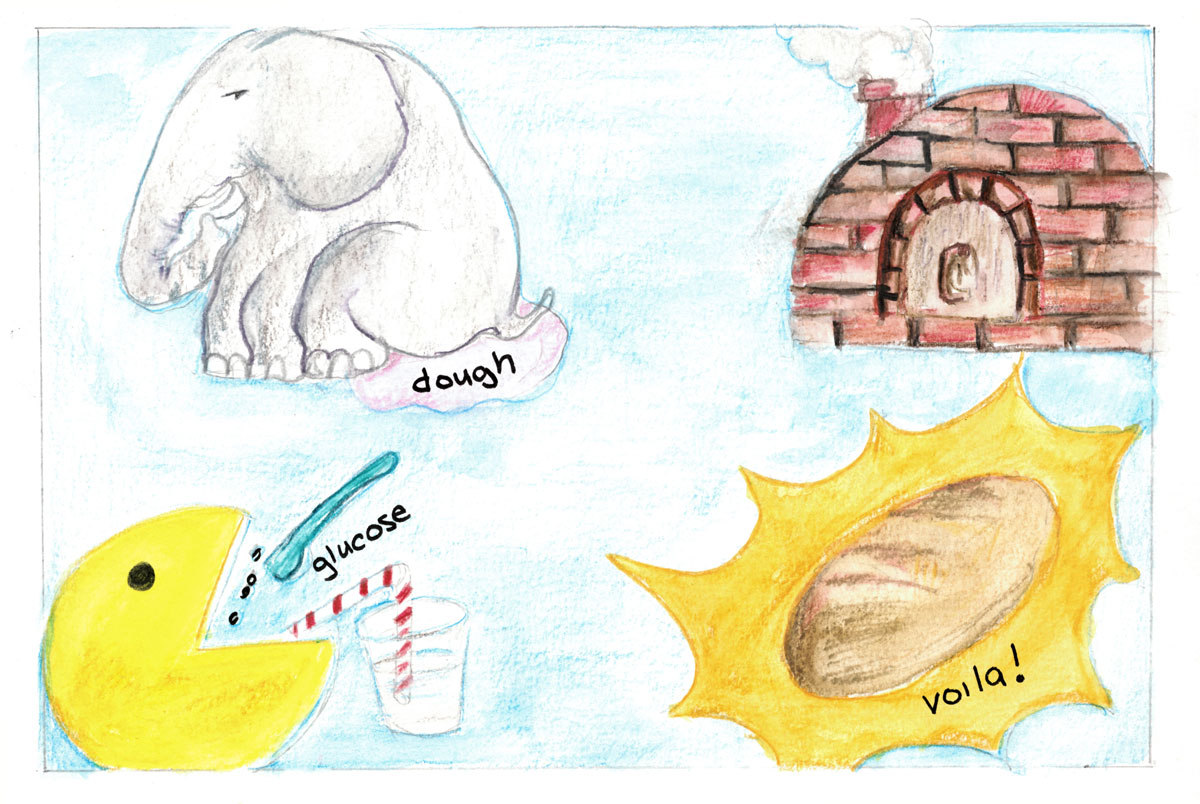 It is hard to believe that cupboard staples - flour, water and salt - together with microorganisms - yeast - can create something amazing! My husband John bakes a simple loaf of bread at least every week using just these four, simple ingredients and the chemist in me made me wonder what happens to them during the process.

The main ingredient of bread is flour, which is mainly composed of starch and proteins. Starch is one of the two main building blocks of the structure of bread and is also the source of food for the yeast. In flours such as wheat, rye and barley, gluten-forming proteins become the second structural building block.

Water is an essential participant at all stages of the bread making process. Right at the beginning, it hydrates the starch granules, making them swell and become sticky. It also is critical in the formation of gluten, and to the enzymatic breakdown of starch to glucose necessary for yeast respiration. The right amount of water makes dough pliable, allowing it to expand and, towards the end, water in the form of steam is key to crust formation.

Some bread recipes don’t include salt but the benefits of its use cannot be trivialised. Used in small amounts it enhances flavour, intensifies crust colour and helps to strengthen the dough. On the other hand, it also slows down enzyme and yeast activity, and in large amounts is unhealthy, so adding the right amount is important.

Then there’s the tiniest little thing - yeast. Baker’s yeast (Saccharomyces cerevisiae) is a living organism that is a natural leavener - it’s what makes the dough rise. It is available in fudge-like compressed blocks, active dry yeast, smaller granules of instant (aka quick or fast-acting) yeast, and (to commercial bakers) as a liquid suspension. These are interchangeable but used differently (fresh and active dry yeast are dispersed in water, while instant and liquid yeast are added straight to the dry ingredients) and in different amounts. S. cerevisiae is also one of the yeasts commonly found in sourdough starters.

When John mixes strong white bread flour, water, yeast and salt in a bowl, the salt dissolves and everything becomes incorporated to form a homogeneous dough. As the flour becomes hydrated, chemical bonds form between a pair of proteins, called gliadin and glutenin, to form gluten. Given enough time, gluten will form by itself, but the process is sped up by mechanical action, such as mixing, stretching, folding and kneading. As the starch, proteins and (if present) bran take up the water, you will notice a change in the mixture from a wet, sticky mess into a smooth, pliable dough. Proper gluten formation results in a dough that stretches to make room for the carbon dioxide produced by the yeast, and is also elastic enough to hold onto it. Imagine gluten as joists and rafters that support a roof.

As the yeast gobbles up the freed glucose, it produces carbon dioxide, which fills and expands microscopic spaces in the dough, causing it to rise. This process is called respiration and can occur in the presence or absence of oxygen. When this happens anaerobically (without oxygen, called fermentation), ethanol and many other by-products such as reducing sugars (from starch) and amino acids (from protein) are also formed. All these wondrous events happen during the first rising (called bulk fermentation) and at the end of which, the dough would have roughly doubled in size.

The dough is divided, moulded into its desired shape and - typically - is set aside to prove again before baking. The yeast continues to be hard at work, fermenting and generating more carbon dioxide. Other complex reactions, such as the breakdown of sugars to organic acids by bacteria, are on-going in the background, all leading to a flavourful loaf.

As the loaf starts to bake, the sudden increase in heat causes what is known as oven spring, the result of ethanol and water in the dough evaporating and, together with carbon dioxide, expanding rapidly and making the dough rise further. This expansion is facilitated by introducing steam into the oven during this first stage keeping the crust supple, while slashing the dough controls how it opens up as it reaches full volume. The sticky, hydrated starch granules gelatinise and the gluten solidifies, giving bread its strong yet flexible structure that holds it in shape. As the internal temperature of the dough passes around 60-65°C, the yeast dies.

As the surface of the dough dries out in the high heat of the oven, the gelatinised starch becomes a crisp and glossy crust. Certain sugars and amino acids in the crust undergo the Maillard reaction with each other, generating much of the complex flavours and aromas associated with good bread. The higher the temperature and/or longer the baking, the greater the caramelisation of sugars and so deeper the colour of the crust. One word of caution - cooking in dry heat at high temperatures (e.g. baking, roasting and frying) also leads to asparagine, an amino acid in flour, reacting with sugars to form acrylamide, which is carcinogenic. Regulations and guidance are now in place for food producers in the UK, Europe and elsewhere to reduce its formation.

In the end, you’ll hopefully get a well-risen loaf of bread with an appealing golden-brown colour, a nice crust and excellent texture, which also smells heavenly as you take it out of the oven and tastes great. However it turns out, a homemade loaf is always much better and more satisfying than a store bought one. If it doesn’t go quite how you expected, you can always try again!