Dough on the road

In 2015, Malin Elmlid wrote about her bread bartering travels. 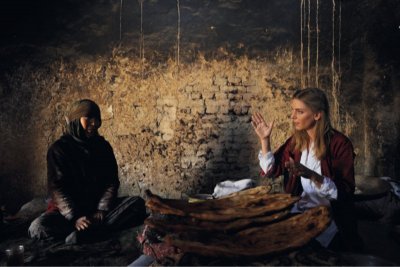 One loaf of my bread for anything that might inspire me, but never money.  That was the idea behind The Bread Exchange.

I started baking in 2007. I had moved from Sweden to live in Berlin and, although I could buy fantastic rye bread, I just could not find good white bread. Soon I was baking so much that I had to give my bread away or it would have been wasted. After about a year, people started to give me things back and The Bread Exchange was born. I set up a blog and each time I baked, I posted when and where people could pick up a loaf.

As I was travelling for work I found myself unpacking my sourdough starter from my suitcase and borrowing ovens at local bakeries all over the world. I was able to learn from some amazing people who let me into their bakeries; Chad Robertson at Tartine in San Francisco, for example.

Of all my journeys, I believe the one that made the largest impact on me must have been my visit to Kabul.

I did not know what to expect of Afghanistan, but I soon realised that I rarely saw another woman in the market or on the street. I learned that women, or rather their children, are under constant threat of kidnapping: in 2012, 10,000 children were reported to have been taken, and that’s just the official figures. This practically leaves mothers besieged in their own homes.

I wondered how I, a western woman, would ever be able to interact with local women. My ticket into their lives proved to be the bakery. The one time that women in Kabul do venture out is to take their naan dough to the local communal bakery, the naanwaee, where the female baker fires it for them. The women told me that this is the only chance for them to meet other women who are not related to them.

Traditional Afghan naan is baked in a tandoor oven in the ground. The baker kickstarts the fire with plastic bags, which make the air in the bakery highly toxic and practically unbearable. She then uses two types of wood. The first is archa, which is oily, smells like juniper and creates hot, high flames that lick the walls all the way to the top of the oven. Then she adds balut, or toot, which burns slowly and steadily to keep the tandoor at an even baking temperature. The baker flattens the dough, leans into the burning hole and, after wetting one side of the naan, she glues it to the wall.

When this began it was all about the bread. It was about making that perfect loaf out of nothing but flour water, salt and sourdough culture; free from additives and commercial yeast. I wanted to be able to eat a white loaf that was not giving me a bloated stomach or my blood sugar to peak. But that was only the beginning.

Soon it became as much about people as the loaves themselves. The bread was just a perfect door opener. There is something special about bread that we all understand. Bread has a high poetic value regardless of our culture heritage or what religion or class we belong to. Not many things in our world have such a universal quality. Bread does not know borders, and you do not fight someone who just shared his bread with you.

By the end of 2014, I’d traded more than 1400 loaves of bread. That means that someone has shared something with the intention of inspiring me on nearly one and half thousand occasions. Imagine that. To me that is worth more than any money in this world.

Bread has taken me to Afghanistan. It has opened a door to the European art collector elite in Switzerland. It took me over the Atlantic and invited me into underground farmers’ markets in California. So now my bread is seasoned with the inspiration from earlier trades: it is a carrier of tales. Because, for me, stories from and about good people are the most complex and fascinating flavour enhancer there is. And it is this fourth secret ingredient that makes it special.

But if I am honest, I think that the most valuable lesson that The Bread Exchange project has taught me is the value of the most simple and essential things that surround me. So now I am working on opening a bakery in my adopted hometown of Berlin. My next mission is searching for a highly skilled baker who likes what I am doing and would be up for sharing this new adventure with me!