To the honour of bread

An insight into the bread culture of the Ukraine by Tatiana Shrimpton. 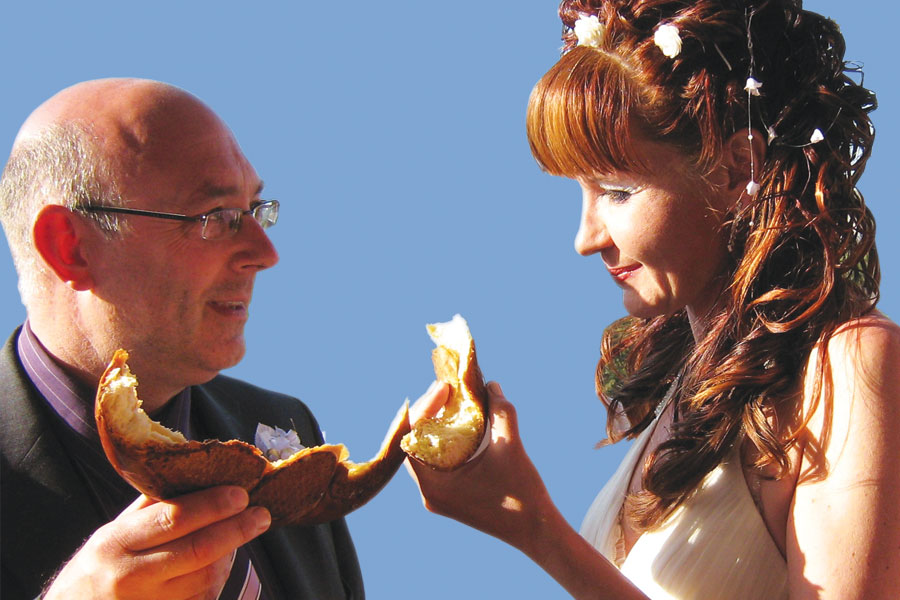 Before settling in Derbyshire, Tatiana Shrimpton was a Technologist of Bread Products at Kiev National University of Food Technologies. She says it's a country in which they have proved that industrial loaves can be not only Real Bread, but also long-fermented ones.

It is fair to say that in the Ukraine we love Real Bread, slowly fermented according to traditions in which the smells and tastes of the Motherland have accumulated over centuries. Slavonic people living abroad miss their chunk of traditional wheat and rye (what used to be known in English as maslin) sourdough bread the most.

Statistics show that consumption of bread products in the Ukraine could be 86-110kg (or more) per person a year: 50% of this amount being white wheat bread, 30% rye bread, and 20% other bread products, such as sweet rolls and biscuits. By comparison, consumption in the UK is less than 50kg per head, 75% of which is white wheat loaves.

Head of the table

Bread in former USSR states, including the Ukraine and Russia, is and always has been the main product for many families and is known as the ‘head of the table’.

In the Ukraine bread is treated with respect and has a special place and meaning. It symbolises wellbeing and prosperity, and we believe it is a sin to throw away a slice of bread. I remember, every year on the very first day of school we always had a lesson to the ‘Honour of Bread,’ talking about tired bakers’ hands and the long, hard working journey from sowing wheat seeds to the loaf on your table.

We have a tradition where caravay, a special rich celebration bread, accompanied by salt, is given by parents as a blessing to newlywed couples.  It symbolises that they are giving their children the most important gifts for a happy life together.

Mass production in the Ukraine

Due to the importance of bread, production is still under strong state control. The use any artificial additives is not permitted in mass production and therefore plain bread is produced using just flour, water, yeast and salt. Some extra natural ingredients are allowed and used, such as rye and barley malt, wheat bran, sugar, treacle, margarine, sunflower oil, dry milk powder, milk whey and seeds for special types of bread and rolls.

To achieve better quality of texture, porosity and flavour, most Ukrainian bread (approximately 90%) is produced using traditional techniques of long fermentation based on starters. In the UK this process is generally associated only with artisan bread making.

Different leavens are used for different breads. For wheat bread they contain predominately fresh yeast, while for rye bread a combination of yeast and lactic acid bacteria (i.e. a sourdough starter) is used. Lactic acid fermentation is essential for rye bread as it creates a specific acidic environment required by rye proteins to create a nice soft sponge texture.

Large scale bakeries work 24 hours a day, baking sourdough bread and preparing starters for the next shift: from 100kg portions for batch production to 600kg per section for continuous line production. The main characteristics of the starter and sourdough (temperature, acidity and humidity) are controlled by the shift technologist to ensure that a consistent quality of bread will be achieved.

State regulations require bread shelf life to be 24-48 hours, which creates a big pressure for bakers to produce, distribute and sell quickly, and this fits with a national habit of having fresh loaves every day.

Why do we love long fermentation?

Firstly, sourdough bread is part of the traditional Slavonic culture. In cold snowy Russia rye bread used to be a major source of vitamins and other micronutrients. Some rye bread recipes, such as national favourite Borodinsky, came from the 14th and 15th centuries and are still produced according to original techniques.

Secondly, due to the processes of lactic acid and alcoholic fermentation, traditional techniques give the loaf unforgettable aromas, unique flavours, and a wonderful spongy light texture. Although State regulations dictate a shelf life of one to two days to be shown on packaging, sourdough bread products stay fresh longer due to accumulated natural preservatives.

Amino acids are the building blocks of proteins, which are used to build and repair cells in living organisms, including us. Some amino acids are known as essential, meaning that they cannot be produced by the human body and so must be supplied by food. Traditional sourdough bread has been shown to contain all of these essential amino acids, making it a valuable part of a daily diet.

It is a shame to hear so often that bread could be ‘unhealthy’. How and why, after thousands of years of history - the Egyptians started to use fermentation for baking bread five to six thousand years ago - has bread suddenly become perceived as an enemy?

We should not blame naturally-produced Real Bread!

New, no-time production methods were introduced in the UK the early 1960s and spread to many other countries. Is it a coincidence that for the last thirty years the number of people in these countries reporting gluten intolerance, allergy and even coeliac disease appears to have increased?  Studies show that in Europe, USA and elsewhere coeliac disease has increased as much as five times since the 1950’s. And has the widespread use of dried gluten as an additive in industrial flour, baking and other factory foods compounded the problem?

The biochemistry of bread shows that through the long, six to twelve hour multistep fermentation process used in the Ukraine, wheat proteins begin to decompose to simpler amino acids that are easier to digest.

To support and protect Real Bread’s good name I would like to share some words of wisdom remembered from university that can be translated as:

“How many have come to the conclusion that a piece of well-made wheat bread constitutes one of the greatest inventions of the human intellect?” Russian scientist Kliment Timiryazev (1843-1920)