How local areas are taking action on outdoor advertising.

Tackling junk food advertising has never been higher up the agenda. Set against a backdrop of an increasing burden of diet related disease on individuals and society as a whole, everyone from national government, local authorities, businesses, charities and fundamentally, citizens, have accepted the need to increase the scale and impact of action commensurate to tackling the problem. Beyond the important attention being paid to online and broadcast advertising, promotions and packaging, the appetite to tackle physical advertising at a local level has rocketed.

Over the second half of 2018, Food Active (a healthy weight programme delivered by Health Equalities Group) and the charity, Sustain (the alliance for better food and farming) joined forces. By reaching out to local authorities and food partnerships in the Sustainable Food Cities network, they explored what powers local people had to reduce advertising in their area which promoted less healthy food i.e. food categorised as high in fat, salt and/or sugar (HFSS) according to the Department of Health’s Nutrient Profiling Model. By looking at different settings and types of advertisement, detailed systematically in this report, they tested the boundaries of current powers.

The report looks at where advertisements feature in settings with a high audience of children including near schools and other areas within the council’s control including local transport and telephone boxes. This also includes a case study on the ground-breaking work done with the Greater London Authority who have introduced advertising restrictions on food high in fat, salt and/or sugar (HFSS) across the Transport for London network. The report ends with recommendations for further powers to allow for greater controls locally where the proliferation and location of junk food advertising is at odds with local health priorities. Equally, much more could be done at a national level to clarify existing regulations, if not extend them, and to follow through with meaningful action when there has been a breach. 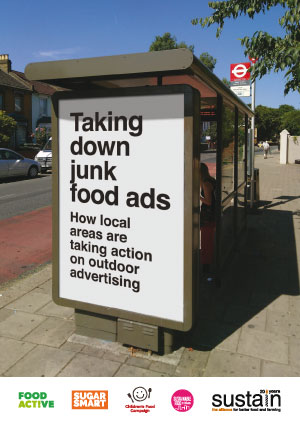