A Battle in store. A discussion of the social impact of the major UK supermarkets

Sustain's report reveals the complex effects of supermarkets on society and why the social and environmental problems they create, the unfair competition for smaller and independent retailers, and the unfair terms of trade they impose on suppliers, need solutions far beyond what the Competition Commission and DTI were proposing at the time of its publication (2000).

Sustain's report reveals the complex effects of supermarkets on society and why the social and environmental problems they create, the unfair competition for smaller and independent retailers, and the unfair terms of trade they impose on suppliers, need solutions far beyond what the Competition Commission and DTI were proposing at the time of its publication (2000).

At time of writing, about £66 out of every £100 spent on groceries is at supermarkets. Meanwhile, the very same stores have numerous critics. More often than not, the popularity of supermarkets is used to negate the critics (if you want supermarkets, you'll just have to live with their problems or, if you are that worried about their disadvantages, then you'd stop shopping in them). This 'shrug your shoulders' mentality has long pervaded the supermarket debate.

This report shows how supermarkets are not just a product of consumer demand but also of strategy and policy, and the outcome of complex corporate practices. It details the two major contentious issues that still hang over the supermarkets (location and competition), summarising the facts and the figures, the whys and the hows. The report is the result of extensive research and consultation with a wide range of stakeholders, seeking to understand the effects of supermarkets on our food system.

The aim is to provide a greater understanding of why supermarkets are what they are so that they can be changed for the better, and so that the alternative food retailing provision can be given a chance to thrive.

If we educate ourselves about the damagin environmental and human impact of our food system, then we can take the necessary steps to minimise that impact. We can then demand policy to create a proper balance between the supermarkets, other food retailers, the consumer and the environment.

4. Looking For A New, Fairer Contest 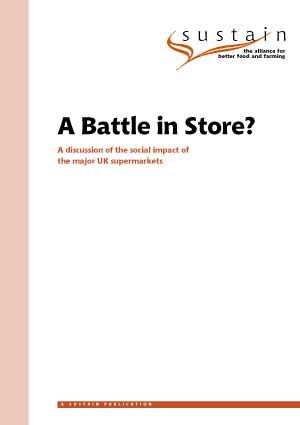