The Hull City Council Healthy Lifestyle team have been working in partnership with children’s centres to deliver cookery training with a focus on using fresh vegetables and with Hull Food Partnership and Veg Power UK to spread the love of veg to a much bigger audience in the city. 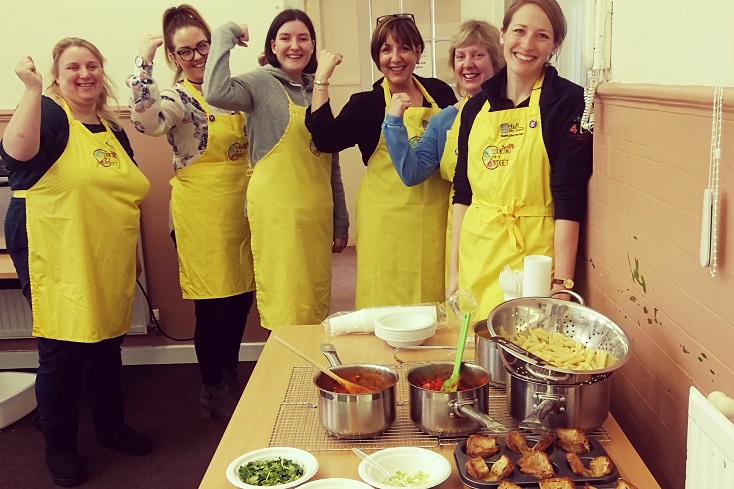 As part of the Hull Veg Cities campaign, the HCC Healthy Lifestyle team ran seven different training sessions so far, ranging from two-hour sessions to more in-depth five-week cookery courses. The training took place in six different children’s centres. The healthy cooking on a budget courses reached over 100 parents and a cookery demo at the Seed Swap event reached over 200 people. The aim is to support positive lifestyle behaviour choices within families who are at most risk from health inequalities and training for volunteers and professionals to deliver cookery sessions.

Many of the Children’s Centres are situated in economically deprived areas where families have increased risk of food insecurity and there are high levels of childhood obesity.

In parallel, the HCC Public Health team worked with Hull Food Partnership to reach out to a much bigger audience using the Veg Power UK #EatThemToDefeatThem campaign. For two weeks in March, thanks to funding from HCC Public Health, 62 billboards showed #EatThemToDefeatThem posters. Veg Power school parks featuring a Veg Power reward chart and stickers and Veg City postcards were delivered to all 13,000 KS2 children attending primary school in Hull.

Children's Centers featured Veg Power adverts and promoted the Veg of the Week from January through April on social media and displayed 100 adverts in their community advertising spaces.

Keep Growing Aberdeen is a seedling sharing project formed by a new partnership between CFINE, One...

Sustain joins joint call for the reinstatement of the School Fruit and Vegetable Scheme...