Olympic menus to take Games visitors around the world

Jan Matthews, Head of Catering for London 2012, discusses the diversity of foods set to be available at the Olympic and Paralympic Games 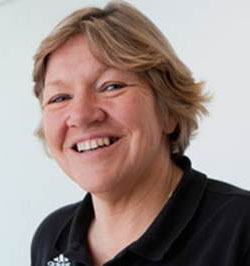 The Guardian newspaper has today reported on the diversity of food that will be available at the London 2012 Olympic and Paralympic Games.

As The Guardian reports, Games catering will offer everything from goat curry to frosted cupcakes, South African barbeque to fish and chips. The spectators' menus to be unveiled next week aim to cast the London Games as a festival of food. In an attempt to promote Britain's eclectic culinary culture alongside the dominant Olympic sponsors – McDonald's, Coca-Cola and Cadbury – the organisers are preparing to lay on meals and snacks for the holders of almost 9m tickets, including pasties from Cornwall, yorkshire pudding, bacon butties and "butchers' bangers", as well as more modern British and international tastes from sushi to salt beef.

"Out of the 205 nations sending athletes, 195 are represented in the six Olympic boroughs and that means British food is world food," said Jan Matthews (pictured left), head of catering at the London 2012 organisers, LOCOG. "We are trying to make it feel like a food festival and we have walked round Borough market [a London gastronomic market] several times to try and get that feel. There will be fruit barrows and stalls where you can buy different types of olives."

Supplies are also in place to serve Fairtrade food, higher welfare chicken and pork in the media centre and athlete's village, and sustainable fish. But the original aspiration to serve largely organic produce has not been met.

"Something as influential as the Games and the exposure the food strategy attracts means there has been a big conversation around catering standards," said Kath Dalmeny, policy director at Sustain, a campaign group for better food and farming who sat on the Olympics food advisory group and now runs the Food Legacy initiative inspired by the London 2012 Food Vision. "If you eat in a company canteen, at an event, at a museum, at a tourist attraction, everywhere you turn you are being fed by the caterers who are doing the Olympics. Some of them are now coming up to scratch and are realising that issues like free range and Fairtrade are important."