Joan Walley [1], MP for Stoke-on-Trent North, today launched a campaign for legally binding standards to improve public sector food after it was revealed that whilst toilet paper bought for Government departments has to meet mandatory standards [2] food served in hospitals, care homes and the armed forces does not. 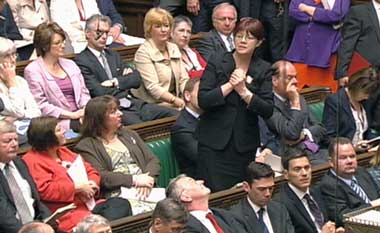 The public sector has introduced much needed mandatory sustainability standards into its procurement policies but food standards have been left on the shelf. In June, the MP introduced a new Bill to Parliament that would require government to draw up health, environmental and ethical standards for public sector food in the same way as they have been introduced for other goods bought by government, such as toilet paper [3].

Last week, Joan tabled a Parliamentary motion [4], which will be signed by MPs who support her Bill. She said: “While I very much welcome the fact that Government departments can only buy toilet paper which meets clear sustainability standards, I am very concerned that the food we buy in our hospitals, care homes and armed forces is not required to meet any standards whatsoever. The taxpayer pays Ł2 billion every year for food served in public sector institutions [5] and it is imperative that mandatory standards are introduced so that we know it is good for our health, supports the environment and invests in the best of British produce.”

Joan is working with the Good Food for Our Money campaign to build support for the Public Bodies Sustainable Food Bill, which has the support of more than fifty top health, environmental, farming and business organisations [6].

[1] Joan Walley has been Member of Parliament for Stoke-on-Trent North since 1987. During her time in Parliament Joan has been passionately committed to the environment and to her native North Staffordshire. On 10 June 2010, Joan was elected by her parliamentary colleagues to Chair the House of Commons Environmental Audit Committee. She also continues to play a key role in the campaign for better school and nursery food. In 2004 Joan won the Epolitix Environment Champion Award for her services to the environment. For more information please go to: http://www.joanwalleymp.org.uk/

[2] Mandatory sustainability standards apply for some goods for central Government departments. All toilet paper purchased by central government departments must have 100% recycled content and include only “genuine recovered fibre” in accordance with National Association of Paper Merchants (NAPM) definition. For more information please go to:
http://www.defra.gov.uk/sustainable/government/advice/public/buying/products/paper/spec/paper.htm

[3] The 'Public Bodies Sustainable Food Bill' would require government to create a Code for Sustainable Food which would include standards to improve the health, animal welfare and environmental impact of public sector food, as well as ensure that it acts to support the best of British farmers. A parliamentary record of the Bill is available at http://services.parliament.uk/bills/2010-11/publicbodiessustainablefood.html

The Bill will receive its second reading on 12 November 2010.

Legal standards for better public sector food
“That this House calls for the improvement of public sector food; believes that legal health, environmental and social standards for the Ł2bn of public sector food purchased each year could transform the way that food is purchased and consumed in the UK; believes food served in schools, hospitals, care homes, national and local government, the armed forces and all other public organisations throughout the country paid for by taxpayers should be good for people's health and solve rather than create environmental and social problems; calculates that significant benefits would be achieved by introducing legal standards for better public sector food including tackling diet-related ill health and climate change caused by the food system, investing public money in local economies, rural communities and the best of British farming, creating a sustainable future for endangered seafood and supporting the best of the British fishing industry, and protecting the welfare of animals in the food system; and therefore supports in principle the Public Bodies (Sustainable Food) Bill which seeks the statutory introduction of health, environmental and social standards included in a Code for Sustainable Food”.

[5] Food Matters: Towards a Strategy for the 21st Century, The Strategy Unit, Cabinet Office, July 2008
http://www.cabinetoffice.gov.uk/media/cabinetoffice/strategy/assets/food/food_matters1.pdf

[6] The campaign is run by Sustain: The alliance for better food and farming. A full list of campaign supporters is available at https://www.sustainweb.org/goodfoodforourmoney/