Good Food for Our Money

Why did we launch the campaign?

If strong enough, mandatory standards would ensure that food served in the public sector:

Working with a large coalition of organisations, the Campaign successfully pressed the Department of Environment, Food and Rural Affairs (Defra) to introduce Government Buying Standards (GBS) in June 2011 GBS require one third of public sector institutions – including central government departments, prisons and parts of the armed forces – to only buy food which meets a number of nutritional, environmental and ethical standards.

We were delighted that our campaigning also led to a change to the seafood standards in Government Buying Standards so that they reflect the tough sustainability criteria adopted for the London 2012 Olympic and Paralympic Games.

What happened after the campaign ended?

By the beginning of 2012, Government Buying Standards sat alongside mandatory nutritional standards for school food, which had been introduced in 2005. This meant that two thirds of food served in the public sector now has to meet mandatory food standards.

While this is a cause for celebration, we remain appalled that hospital food in England is still not subject to any mandatory nutritional, environmental and ethical food regulations, despite the fact that £300 million is spent by government on more than 300 million meals in the NHS each year.

This has led us to launch of the Campaign for Better Hospital Food which is calling on the government to set mandatory standards for hospital food in England. The campaign neatly takes over from where the Good Food for Our Money campaign ended, and we are determined to replicate its successes!

To find out more – and to pledge your support – please visit www.hospitalfood.org.uk. 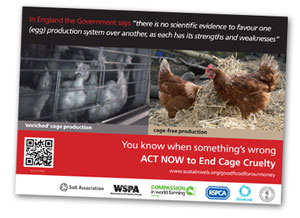 As part of the Good Food for Our Money campaign, we launched End Cage Cruelty which called on central government (including government departments, prisons and parts of the armed forces) to buy only cage-free eggs. This campaign is so popular, that we are going to keep its Facebook page live. If you care about the welfare of egg-laying hens, please join the End Cage Cruelty Facebook community at www.facebook.com/endcagecruelty.