Calls grow for Government measure of ‘hidden hunger’ as YouGov survey commissioned by End Hunger UK members, including Sustain, reveals shocking figures that help shed a light on the extent of hidden hunger in the UK. 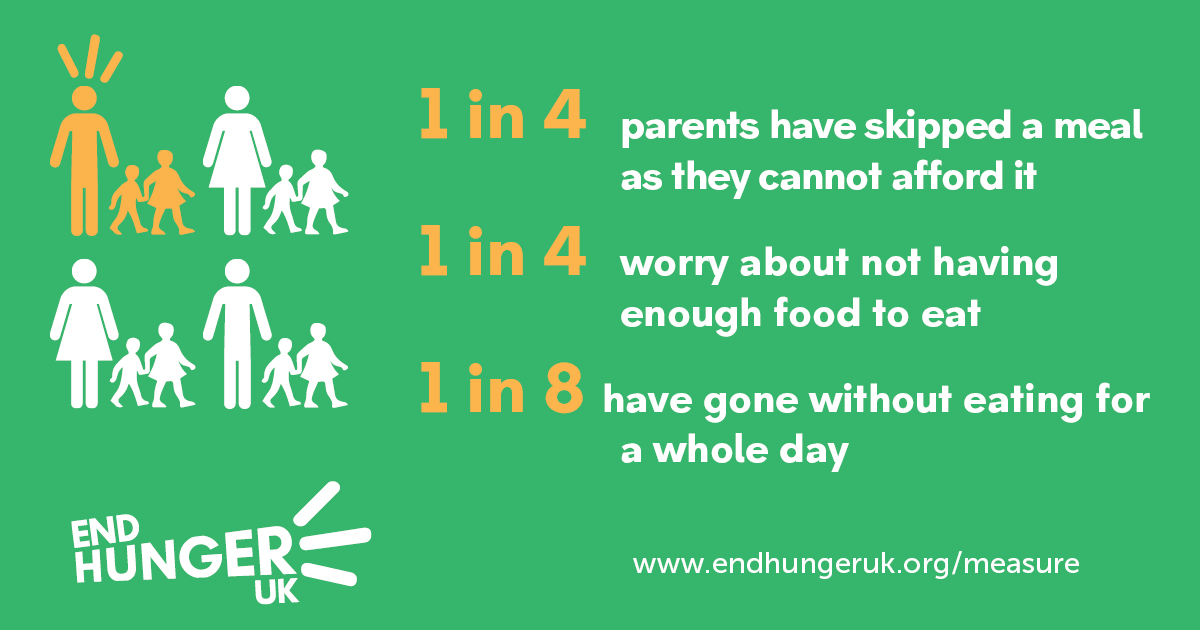 The new figures released today from the YouGov survey help show the extent of ‘hidden hunger’ and food insecurity across the UK. Food Insecurity is defined as going hungry, at risk of going hungry, or worried about going hungry due to not being able to afford food. Headline findings include:

The End Hunger UK coalition is calling on government to support a national measure of household food insecurity to identify and tackle this 'risis in 'hidden hunger'.

‘Now is the time for the government to sit up and tackle the growing issue of hunger in our country. Whilst the Government has carried out snapshot measures of food insecurity, these are piecemeal and don’t allow for assessment of long-term trends. We know that 1.1 million food parcels are given out in Trussell Trust foodbanks alone but these figures are clearly the tip of the iceberg. - the United Nations has estimated over 8 million people in the UK are food insecure; approximately 2000 food banks and foodbank centres are in operation; rising levels of hospital admissions due to malnutrition cost the NHS £12bn per year; and there are record levels of in-work poverty.

"Without a robust system of household food insecurity measurement in place, making policy to mitigate hunger will never become a reality. It is clear that the time for action is now and urgent. That’s why I’m taking a bill to Parliament to make the Government measure hidden hunger, because what gets measured gets mended.’"

Imogen Richmond-Bishop, Right to Food coordinator at Sustain, the alliance for better food and farming said:

"The scale of household food insecurity in the UK is shocking, the figures from the Yougov survey show that one in four parents with children under 18 are currently skipping meals, with a shocking 16% of all adults in the UK either skipping or seeing someone in their household skipping meals due to a lack of funds.

"Government led household food insecurity measurement is a crucial step on the path to the full implementation of the right to food in the UK.  However we believe that cheap food is not the answer to food insecurity. The government should be taking adequate steps to ensure that all individuals in the UK are able to access a sustainable and affordable diet by ensuring that wages and/or welfare payments are at a sufficient standard so as to ensure that individuals are able to maintain an adequate standard of living."

Take action to generate progress on getting the government to measure household food insecurity. Emma Lewell Buck MP’s Bill on Household Food Insecurity Measurement will have its second reading in Parliament on 2nd February 2018. Contact your MP and ask them to support it. There are a number of ways you can do this, either via email, post, and even via social media!

To read more about measuring household food insecurity, Sustain along with the University of Oxford, and the Food Foundation earlier published a report outlining key facts supporting the case for measurement. 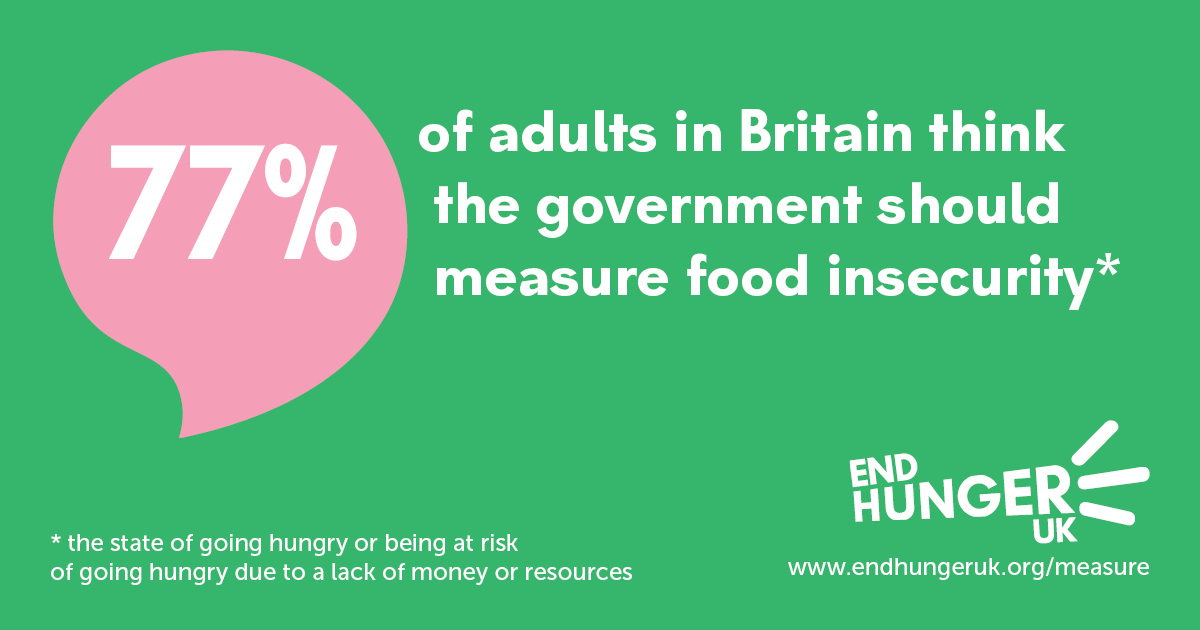 All figures, unless otherwise stated, are from YouGov Plc. Total sample size was 2,032 adults. Fieldwork was undertaken 16th-17th January 2018. The survey was carried out online. Figures have been weighted and are representative of all GB adults (aged 18+).

End Hunger UK is a coalition that has a vision of a UK where everyone has access to good food, and nobody has to go to bed hungry. It is supported by many national organisations, including: Baptists Together; Child Poverty Action Group; Church Action on Poverty; he Church of England; the Church of Scotland; Fareshare; First Steps Nutrition Trust; Food Bank As It Is; Food Ethics Council; Fabian Commission on Food and Poverty; The Food Foundation; the Independent Food Aid Network; Food Matters; Magic Breakfast; the Methodist Church; Nourish Scotland; Oxfam; Quaker Peace and Social Witness; Sustain: the alliance for better food and farming; The Trussell Trust; and the United Reformed Church.