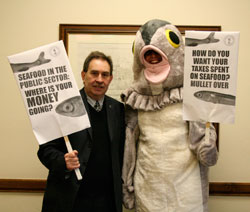 The government was today begged by campaigners to end its careless approach to buying seafood. Currently, schools, hospitals and care homes, for example, can buy fish such as cod, haddock and wild salmon that experts warn are being over-exploited and now have seriously low stocks, or have been caught by destructive fishing methods.1 Campaigners are calling on government to support new legislation, proposed to Parliament today, to guarantee that only sustainable fish will be used in public institutions from now on.

A majority of the estimated Ł40 million of taxpayers' money spent on seafood in public institutions each year is likely to have been spent on species and stocks classified as 'fish to avoid' by conservation experts,2 or caught in a way that damages marine life. New research, by the Good Food for Our Money campaign,3 shows that only one out of 341 seafood options available to hospitals via the NHS's biggest catering supplier was certified as sustainable.4

David Drew, MP for Stroud, is today proposing new legislation to Parliament that would ensure all seafood purchased by public organisations is sustainable. A new law would stop our money being spent on seafood classified as 'fish to avoid' by the Marine Conservation Society, and make sure all wild-caught fish meets Marine Stewardship Council standards.5

David Drew MP said: “The Seafood Procurement Bill I am introducing today would help safeguard the future of some our most loved fish species, and would provide the British taxpayer with some much needed peace of mind about the fish that their money is buying.”6

Alex Jackson, Co-ordinator of the Good Food for Our Money campaign, said: “Having no sustainability rules for an issue as important as fish is nothing short of reckless. The only way to guarantee to the British taxpayer that their money is being spent on food that is healthy, good for the environment and conserves of some of the world's most endangered fish is to introduce legally binding standards for all food purchased with public money.”

Members of the public can show their support for the Seafood Procurement Bill by asking their MP to support the Bill, and by signing up as 'fans' of David Drew MP's promotion of the Bill via the 'Good Food for Our Money campaign' Facebook page.7

1. Not all cod, haddock and wild salmon are at risk. However, high proportions of the stocks are, and most are caught in ways that damage marine life – unless explicit effort is made by fish buyers to opt for less damaging 'line caught' options. When asked for data, Defra were unable to provide details of methods of catch or the sustainability credentials of fish bought with public money. With only one certified sustainable option offered to NHS food buyers in the NHS Supply Chain catalogue (see note 4), it is highly unlikely that the fish bought by the public sector is from sustainable sources.

2. No authoritative figure exists for the amount of seafood bought with taxpayers' money for use in public sector institutions such as schools, hospitals, state-run care homes, prisons, government departments, local authorities and the armed services. We have therefore based our calculations on the following: according to a response by the Minister of Justice to a Freedom of Information request, the department calculates that it spends approximately 2% of its total food budget on seafood, which we understand is broadly representative of government purchasing, according to official government figures for 2008. In fact, more money is likely to be spent on fish in sectors such as schools (where there is a mandatory nutritional requirement for fish to be served regularly), so the 2% figure is a conservative estimate. Nationally, the public sector spends around Ł2 billion per year on food, according to authoritative figures published by the Department for the Environment, Food and Rural Affairs (Defra). So 2% of Ł2 billion is Ł40 million.

3. Good Food for Our Money is a coalition of health, environmental and animal welfare organisations campaigning for mandatory health and sustainability standards for public sector food. The campaign is run by Sustain: The alliance for better food and farming, a registered charity. See the campaign website at: www.sustainweb.org/goodfoodforourmoney. Currently, public sector food does not have to meet any specific health or sustainability standards (except in schools, where mandatory nutrition standards apply).

4. Very little information is collected or made available by government on the sustainability credentials of public sector food (a major problem in its own right, as public sector food buyers cannot easily be held to account for the environmental or ethical impact of their buying). To investigate the seafood choices available to public sector food buyers in their routine purchases, we used figures for the total number of seafood products listed by NHS Supply Chain in its catalogue, which is used mainly by buyers in the healthcare sector (the second largest area of government spending on public sector food, after education). In total, NHS Supply Chain lists 341 'fish', 'seafood' or fish-based 'sandwich filling' products. In the catalogue (viewed February 2010) only one of the fish-based products in their catalogue is listed as certified by the Marine Stewardship Council (see note 5 below).

6. David Drew MP will introduce a Parliamentary Bill on 24 February 2010 that would outlaw the purchase of unsustainable fish in the public sector. The Ten minute Rule Motion reads as follows: Mr David Drew: Public Bodies (Procurement of Seafood): That leave be given to bring in a Bill to require public bodies to purchase only those seafood species and stocks that are demonstrably sustainable. See: www.publications.parliament.uk/pa/cm/cmfbusi/a01.htm

7. The Facebook page dedicated to campaigning for Good Food for Our Money is at: http://www.facebook.com/pages/Good-Food-for-Our-Money-Campaign/326230074008