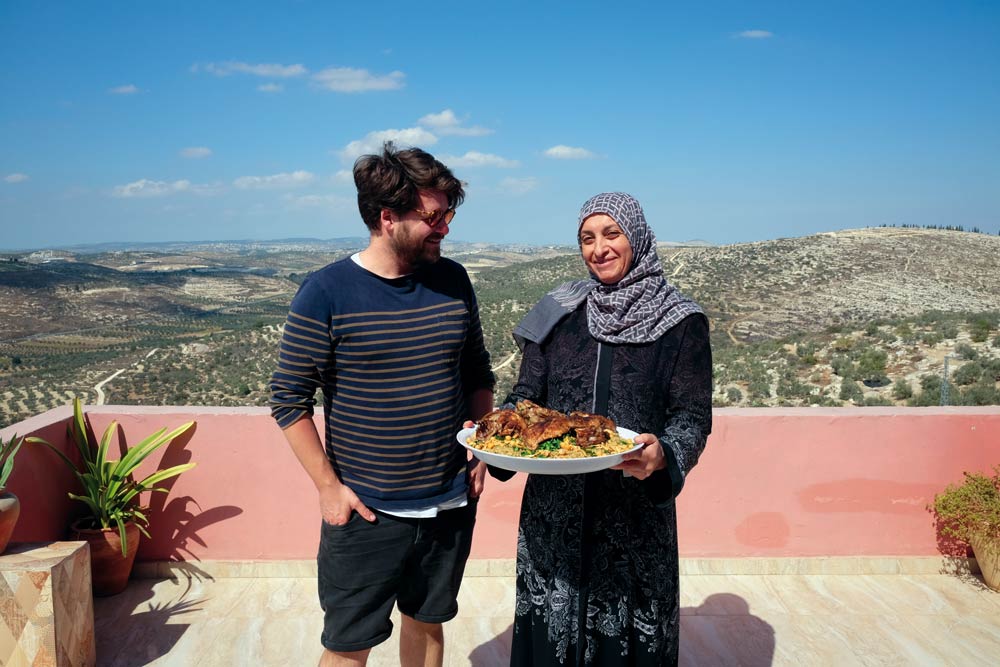 Tom Hunt in Palestine, courtesy of the Fairtrade Foundation

Following a visit to Palestine, the ‘Eel’s resident chef Tom Hunt pays tribute to the Fairtrade movement and women in agriculture – with flavours of the region to recreate at home.

Women comprise almost half of the world’s agricultural labour force, acting as custodians of seeds and agro-ecological knowledge vital for the food security of our planet. However women often go unrecognised as the skilled agricultural workforce they are. Equal Harvest, a study by the Fairtrade Foundation, reports that better gender equality in farming will benefit businesses and support global development, as well as bring gains for women.

On a trip to Palestine with the Fairtrade Foundation and the olive oil company Zaytoun, I had the privilege of visiting a local women’s co-operative in Jenin, northern Palestine. A co-op member called Bessama taught me how to roll maftoul, a couscous of whole local wheat varieties, traditionally made by Palestinian women. This is eaten as a local staple alongside freekeh (roasted or smoked green durum wheat) and flatbread and za’atar seasoning. It takes an hour to hand-roll just eight hundred grams of maftoul, before it is steamed and then sun dried for several days.

Fairtrade certification means a fair minimum price has been paid for a farmer’s product, no matter what happens with the market rate, and that workers are paid properly. This premium is sent to a co-operative bank account where the members decide together how to allocate the money, which must be approved by the local Fairtrade committee. Through offering more than the market rate, Fairtrade can encourage traditional and organic farming methods.

Buying Fairtrade products often supports projects and initiatives that benefit women, such as childcare or training to help them diversify their income. In recent years, the Palestinian Fairtrade committee Al Muqadasa have directed premiums towards a local women’s centre, school playgrounds and collective purchases of farming tools.

Like casserole and tagine, the name fukhara refers to both the dish and the pot in which it is traditionally cooked. I learned to make this in a clay oven at the local bakery during my trip to Bethlehem.

Preheat the oven to 150°C. Layer the vegetables into a casserole or similar, lidded cooking pot, interspersed with garlic, herbs and half of the pine nuts. Season with salt and pepper and dress with the olive oil. Top with the rest of the pine nuts and 200ml of water,put the lid on and place in the oven for three hours. Serve simply as it is or with some cooked maftoul (cous cous) or freekeh (roasted or smoked durum wheat).

Make the most of your produce with chef Tom Hunt’s tips in our continuing Food Hunt series, including How to Make Your Own Sauerkraut, and Summer’s Seasonal Softies.