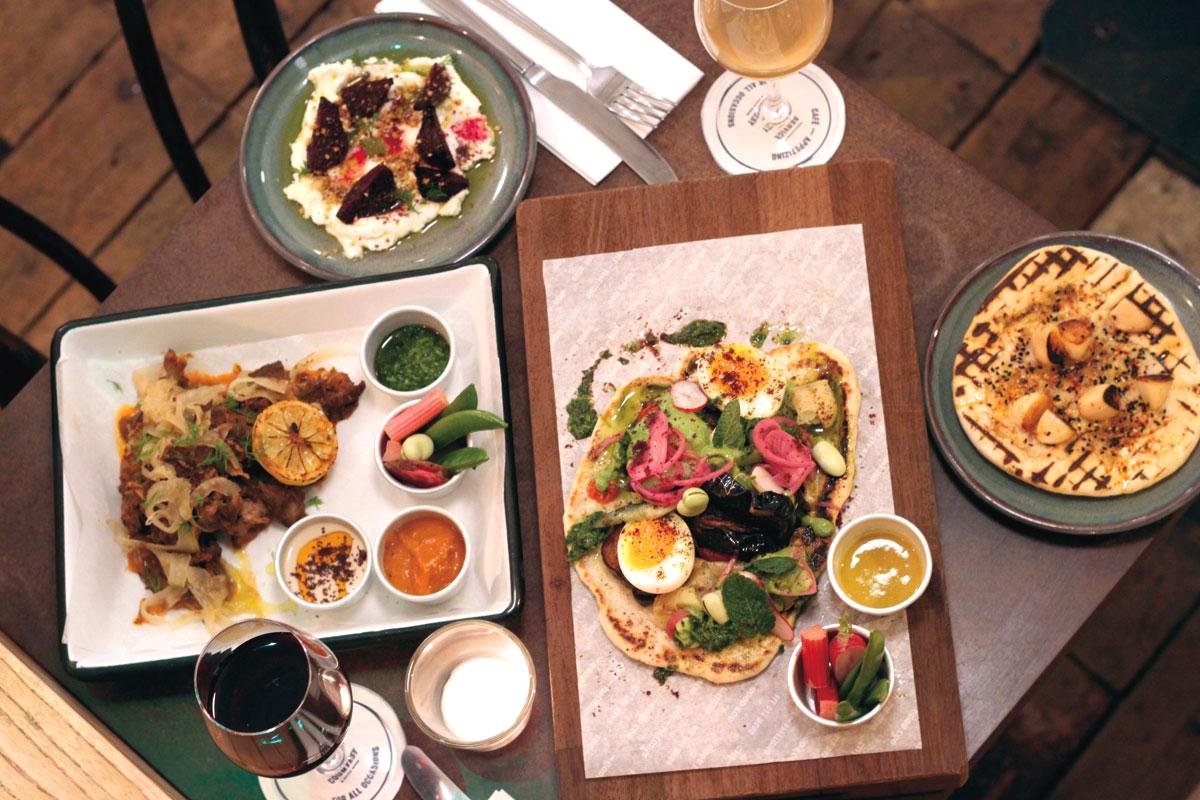 Dishes by The Good Egg

We continue our series of reviews of eateries that go beyond ‘taste nice, looks good’. Kirsten Foster has a cracking time at this Sustainable Restaurant Association member and London Food Link supporter.

Somewhere between a Tel Aviv cafe and a New York or Montreal Jewish deli, according to its founder, The Good Egg has followed the typical London food scene evolution from street food stall to popup to permanent restaurant. Its light airy space in Stoke Newington, with an open-ish kitchen, is buzzing and welcoming. The friendly vibe and the tempting produce on display makes you feel these are good people who want to feed you with good food – and they’ll do it all day.

It’s open from 9am most days, reviving hungover hipsters with spicy bloody marys and beef salami hash, and fuelling mums in athleisure with granola and poached seasonal fruit. The salami and granola, like many of The Good Egg’s carefully-sourced ingredients, are made in-house, and the granola sustains kids as well as mums – for each bowl served the restaurant provides ten healthy breakfasts for schoolkids via charity Magic Breakfast.

The Good Egg’s sharing dinner menu feels like a genuine reflection of the restaurant’s bonhomie, rather than a cynical margin-increasing exercise. Divided into fish, meat, and veg, each food group gets equal star billing, with a whole roast cauliflower giving melting short-rib pastrami a run for its money. It’s not a veggie restaurant -– the ‘vegetable’ dishes may feature the odd bit of chicken skin – but The Good Egg offers veg-lovers a range of dishes where fleshless ingredients are treated with imagination and respect.

Co-owner/director Joel Braham says respect, especially respect for sustainability, is at The Good Egg’s heart: “It goes through our relationships with our suppliers, our staff, our customers and the food we make.” Members of the Sustainable Restaurant Association (SRA), they’ve relied on its advice and resources right from the beginning. They helped with supplier contracts – their contract with South Bank Fish says they’ll only take fish with a high sustainability rating from the Marine Stewardship Council – and advised on employee contracts. “We want to take a sustainable approach to the less obvious things such as employment as well as things like food waste,” says Braham.

With a moreish range of Real Breads (including from Hackney social enterprise bakery Dusty Knuckle) to soak up juices, there’s little food waste from customer plates. What there is goes towards the bonding daily staff meals, and kitchen waste such as peelings goes to Hackney Council’s organic waste recycling collection. “We’d like to do more with our food waste – compost it on site – but we don’t have the time or space or resources at the moment,” says Braham. “We’d like to do more to save water, electricity… there’s a big list of things we could improve on. There’s still a long way to go, even though we set out to do this from the start, because day-to-day you’re focused on just running the restaurant. But we’re always living and breathing the ethos anyway.”

Read our other Good Food restaurant reviews including Mildreds and Olley's.