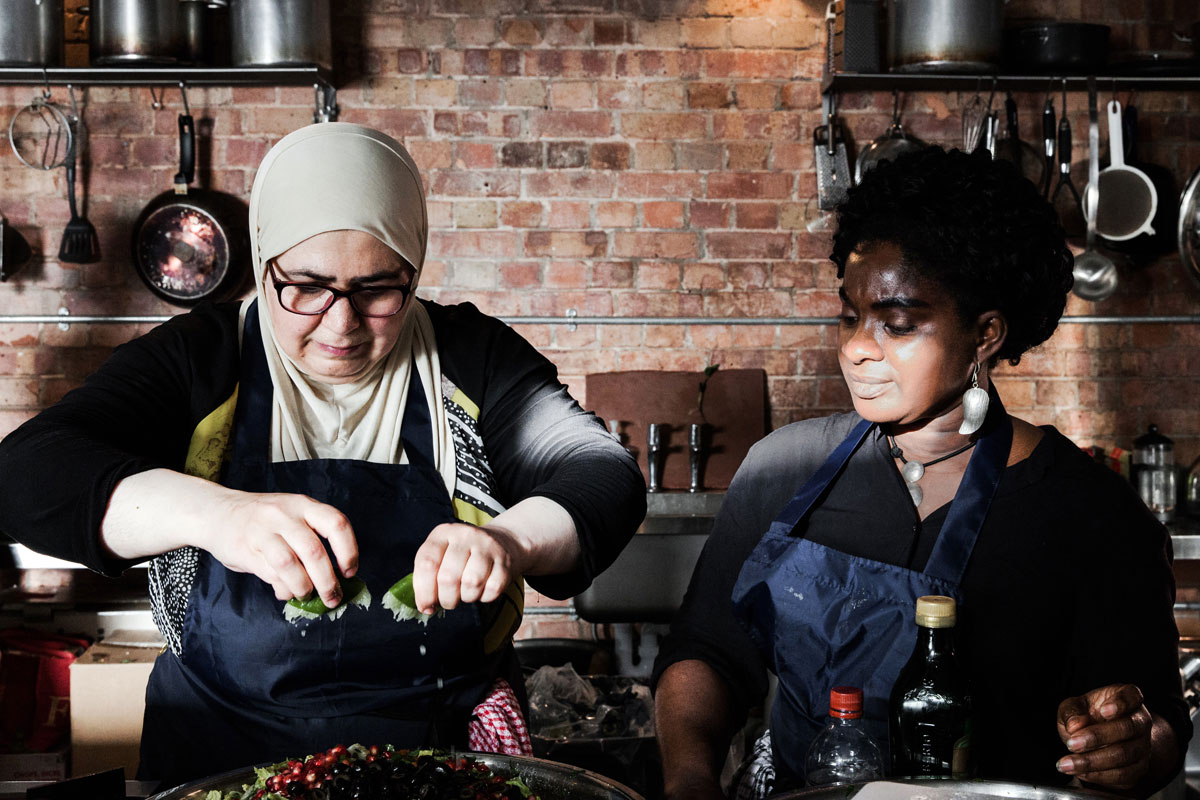 Turning a proﬁt in the food industry is widely recognised as near-impossible, so the explosion of supper clubs with a social conscience is perhaps a surprise, says Sam Sinha. Here they explore the motivation behind the trend.

It could be easy to dismiss the rise in London’s supper clubs as a trend, but behind it we find cooks who want a platform to express their culinary ambition. In some cases, this is also coupled with their desire to make a diﬀerence. Then there are the customers; tired of the choice between bland chain restaurants and over-priced trendy eateries, they want a unique experience, and they want food that is authentic and cooked with love.

Mentoring on the menu

Promoting cross-cultural understanding is what motivates Stories On Our Plate co-founder, Jack Fleming. This social enterprise takes an ambassadorial role, inviting chefs to host dinners at venues including London Cooking Project in Battersea, giving them control so that they can express themselves through the food. But they go further; they help to mentor people with refugee or migrant status, giving them training, for example Real Bread making at E5 Bakehouse, and support in developing their cooking ventures.

Jack explains, “In May, we launched our ten-week programme. It’s already helped dozens of people to build up their skills and proﬁle, and even start teaching others. We use food as a vehicle of, to challenge negative attitudes towards refugees by giving them a platform.”

Another approach is to build a brand, and use the proﬁle to help others by donating proﬁts to charitable organisations. Cook For Syria have a huge proﬁle, and this means they can help more people, albeit less directly. Campaign assistant, Rafaella, tells me “The aim is to celebrate Syrian culture and cuisine, which is one of the oldest in the world.”

The money raised is donated straight to Unicef, who are on the ground in Syria right now, providing children with life-saving food, clean water and vaccines, as well as education, and protection from violence and abuse.” The online movement gives support to chefs and enthusiasts hosting fundraising events, they have published a recipe book and embraced technology, cleverly using the power of online trending to build a community of followers, united under the hashtag #CookForSyria.

Also looking to Syria is Conflict Café. From 21-23 September this year, diners will sit at communal to explore the Syrian crisis through the country’s cuisine and celebrate the power of food to break down barriers, enjoying dishes traditional to the Damascus region cooked by chefs from Ayam Zaman.

A supper club that’s helping people in a diﬀerent way, oﬀers a seven-course tasting menu, inside a former fabric factory. Pedro Passinhas runs Denim and Dine, with an obsession for not wasting food. Using his Michelin-star background to get the most out of his ingredients, he turns oﬀcuts and leftovers into the focus of a menu.

“We hate to throw things away” Pedro explains, “and if we can help people whilst tackling the problem of food waste, then it’s a win-win.” Part of the sense of community comes from explaining how we used every part of every ingredient. It gets people talking and that promotes the sense of community, so it all feeds back on itself.” What he gains from cutting down waste he dishes back out to the community, either literally or through free dinners, or opportunities for work in the kitchen or the allotment.

These are very diﬀerent approaches to helping people through cooking, but what they have in common is passionate people with a drive to aﬀect change in the industry.