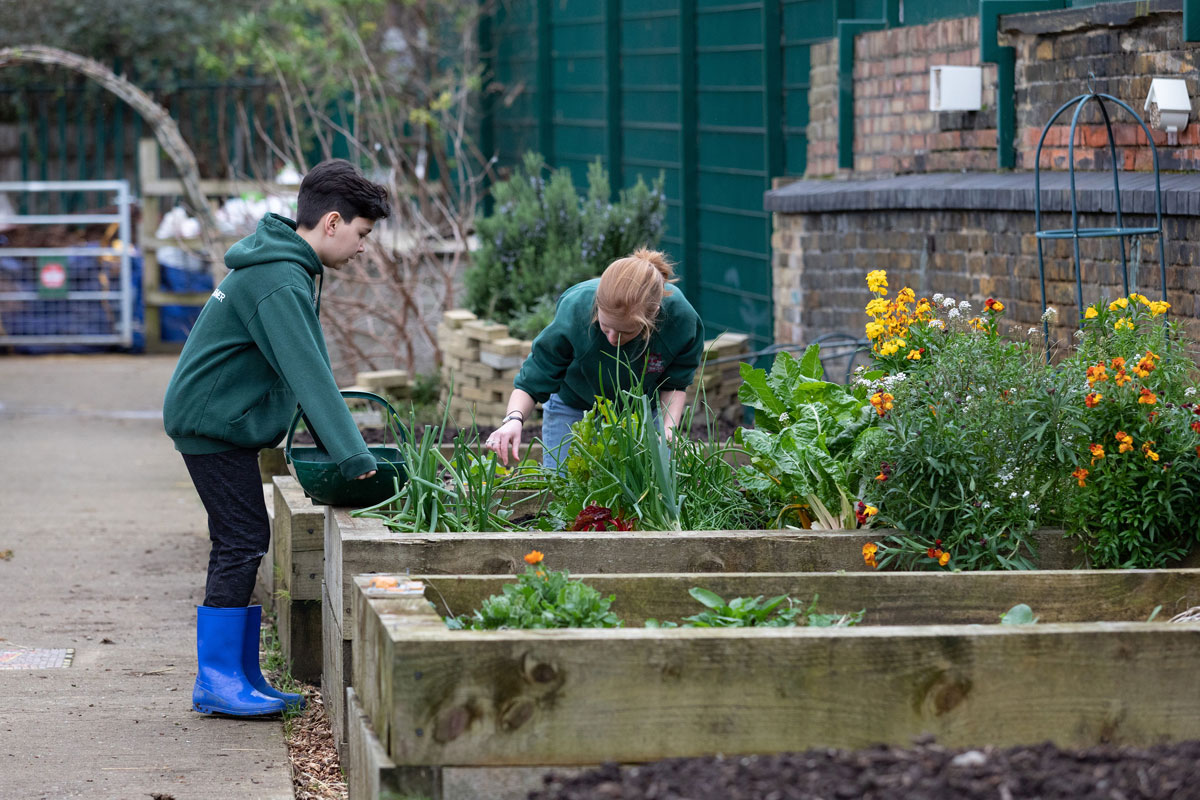 When coronavirus hit, many Londoners stepped up to grow food for those who needed it. Enter Community Harvest – a Capital Growth initiative providing gardens support to grow fresh produce for their local communities. Ayesha Badat and Ellie Costigan find out more.

If there’s one good thing that can be said to have come out of Covid, it’s the inspiring number of people who pulled together to do what they could to make the best of a bad situation. Volunteers signed up in force across the capital to support their communities, not least in the form of gardeners and growers making the most of green spaces to help feed those in need.

In response to this surge in enthusiasm, Capital Growth launched Community Harvest, with funding from The A Team Foundation, providing gardens with soil, seeds and equipment, alongside training and mentoring. Those running the gardens were given a helping hand with the logistics and to connect with mutual aid and community groups such as food banks, lunch clubs and cook ups, as well as directly with local families resulting in a staggering 5.5 tonnes of fresh food benefiting almost 7, 000 households.

We’ve been really touched by the families who have collected produce and shared it with other local families they know who are in more need at the moment.”

One such garden was Surrey Docks Farm, whose Young Farmers’ programme sees eight to 14-year-olds grow their own food from seed, using organic methods, on a farm in Southwark. “As the site has been closed due to the pandemic, the produce the young people sowed in March has been cared for and harvested during the lockdown by the youth manager,” Gemma Hooper, Manager at Surrey Docks Farm, explains. “All of the food grown on the youth allotment was donated back to the young farmers’ families, during what proved a difficult time for many of them. We’ve been really touched by the families who have collected produce and shared it with other local families they know who are in more need at the moment.”

‘The community garden not only provides residents with fresh, healthy food, it helps people learn about where food comes from, and enhances wellbeing and community spirit’

This sense of community was shared not just among those receiving food, but those growing it. “We joined forces with the Victoria Park gardeners, who said we could donate their produce for the project,” explains Zainab Hazel of Cordwainers Grow, which has been donating produce to Akwaaba refugee social centre throughout lockdown. One of the benefits of initiatives such as these is they avoid the stigma that can be associated with receiving ‘handouts’, as often beneficiaries are involved in growing produce. “The community garden not only provides residents with fresh, healthy food, it helps people learn about where food comes from, and enhances wellbeing and community spirit,” agrees Cath Raitt of the Palace Road Estate Residents’ Association community garden, which is run by and for residents.

The causes of food poverty are complex and deeply rooted. While projects such as Community Harvest won’t solve those issues, they shine a light on the role urban gardens can play in providing healthy food within the capital. “We have been so impressed by the gardens, large and small, that mobilised so quickly,” says Fiona McAllister at Capital Growth. Many have grown produce at an impressive scale, too. Glengall Wharf in Peckham doubled their salad production, providing weekly produce to the Southwark Food Bank, while The Castle Climbing Centre in Hackney contributed towards a bigger effort with the National Food Service, helping cook 8,375 meals and deliver 1,350 grocery packages.

“Could community food growing play a more significant role in feeding London than we think?

"The question we’re left asking is", says Fiona McAllister, Capital Growth Coordinator, “could community food growing play a more significant role in feeding London than we think? Given support, access to land and proper funding, urban food growing could be one of the jigsaw pieces needed in building a more sustainable food system,” she continues. “Initiatives like Community Harvest are starting to show us what is possible.”

What to get involved in growing food this season? Book onto our Spring into Action networking event, 24 Feb 2021 10am, and check out Capital Growth's Good to Grow event this April.