Scare away food waste this Halloween 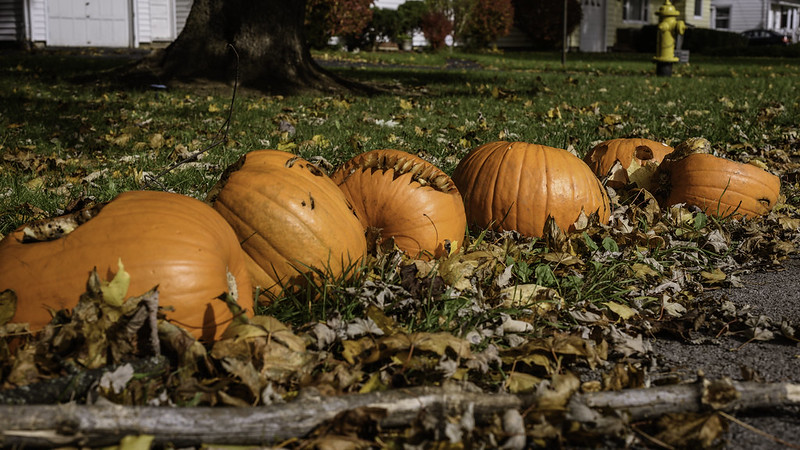 Every Halloween 15 million pumpkins are binned, enough to make a bowl of soup for everyone in Britain. Sofia Parente, Veg Cities Campaigns Coordinator at Sustain invites us to carve out new habits.

Halloween is upon us and to celebrate this autumn holiday millions of people across the UK will be purchasing pumpkins to carve jack-o'-lanterns. The older generations amongst us might remember hacking out swedes and turnips to create creepy looking candlelit creatures. The pumpkin tradition more common today is a more recent import from the US but unfortunately we didn’t import their love of pumpkin pie. Most of the carvings and insides, not to mention the carved pumpkins themselves end up in the bin with other household waste.

Pumpkins aren’t our only problem. Food waste is a national tragedy. Estimates by waste charity WRAP put food waste at around 10 million tonnes, one quarter of all food purchased, worth over £20 billion a year. Food waste has obvious implications for climate change but when we throw food in the bin, we are also effectively throwing away all the energy, labour, water and natural resources that went into making that food in the first place.

Charity Hubbub is at the forefront of challenging this ghostly amount of food waste at Halloween. Their pumpkin rescue campaign attempts to reduce the monstrous 18,000 tonnes (estimated) that go to landfill every year. Now in its fifth year, the campaign creatively encourages people to think about the food they throw away and invites organisations to host entertaining, affordable and accessible events.

If you’re as shocked as we are at the horror of 15 million edible pumpkins rotting away in landfill then join the campaign and host your own Pumpkin Rescue party. It could be anything from a city-wide festival of events, to bringing family and friends together for a dinner to make use of your allotment pumpkins or veg-box squashes, to sharing recipes and content on social media under #PumpkinRescue. Last year there were 44 events across the UK, ranging from food stalls to cookery demos, children’s workshops to carving competitions and even composting sessions. So if you’re not the party planning type then check the Hubbub event listing to see what’s happening near you.

You can rescue your own pumpkins from the fright of the food waste pile by making sure you eat or freeze the carvings. Roasted pumpkin seeds make for a scrumptious snack and the gooey guts make a great base for broths and even mulled wine. You can eat your carved pumpkins if they haven’t stayed outside overnight, otherwise pop them in the compost so the nutrients can be returned to the soil. If can’t compost at home, ask your neighbour or have a look on your local council website for your nearest composting site.

We’re lucky to have so many different varieties of pumpkins, gourds and winter squashes here in the UK. Celebrate the diversity and the Pumpkin Rescue is the perfect opportunity to celebrate the different heirloom varieties. Also, if you’re a grower, think about celebrating our agricultural heritage by taking on the humble pumpkin on your plot for next year’s Halloween celebrations. Despite a short season pumpkins grow quickly as seedlings planted in June are ready for harvesting in October and they both look and taste heavenly despite their underworld associations. For this year, here’s a recipe by Mark Breen of Seasonal Kitchen.

If you're carving a jack-o'-lantern this Halloween, save the flesh and use it to make this delicious pumpkin and coconut cake. Pre-heat oven to 180°C, before mixing the pumpkin with oil and maple syrup. Add the flour, baking powder and cinnamon to the mix and combine well, pop in any additonal ingredients at this point. Once combined add your mixture to a greased and lined loaf tin abd bake for 15 minutes, before checking, if the loaf cake is browning cover with foil. Then bake for another 15 minutes (approximately) and allow to cool a little before taking the first slice.

Top Tip:  It's delicious freshly baked but even yummier when it goes gooey the next day