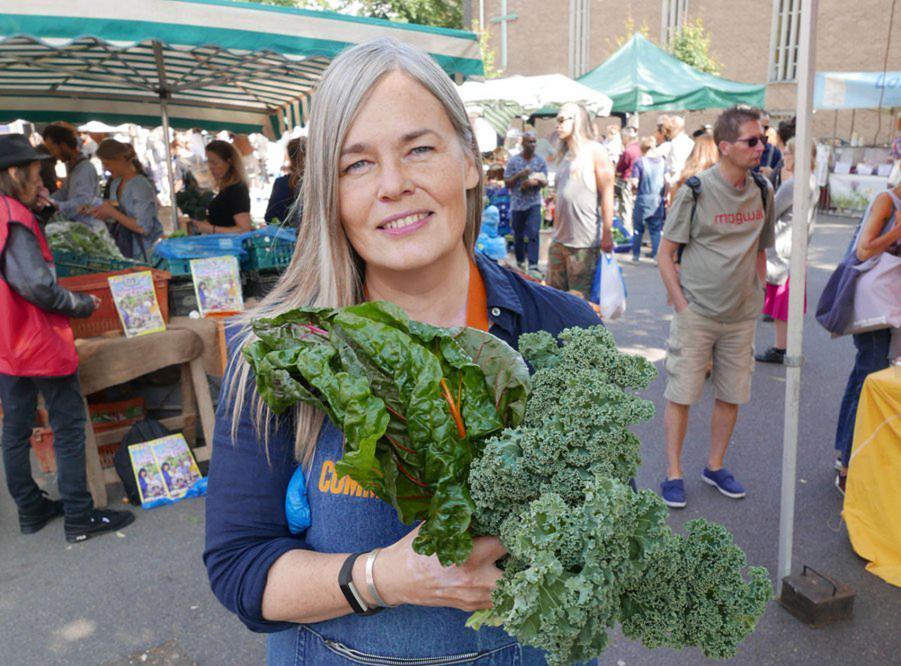 Kerry Rankine has worked at the Hackney-based social enterprise Growing Communities for over 17 years and is currently the Dagenham Farm and Farmers’ Market co-ordinator.  This involves overseeing the long-established Growing Communities’ Farmers Market as well as their Dagenham Farm, which was set up six years ago and produces four tonnes of food annually sold through their box scheme and to residents and restaurants.

Where did your love of good food come from? OR What initially drew you to working in food?

I love eating, but my work on food actually came out of working as a campaigner on toxics for Greenpeace – looking at the build-up of toxins in the environment through the production and incineration of PVC and solvents used in dry cleaning and the waste trade. I’m an “expert” on PVC in building materials, which makes me a magnet at social gatherings as you can imagine…

Although we didn’t run an anti-pesticides campaign, it was something I was increasingly interested in – why would we put toxins on our food? So when I got the opportunity to work at the SAFE Alliance (Sustain’s predecessor) on food issues, I jumped at the chance.

You’ve worked at Growing Communities for a number of years now. What have you learnt most about being involved in running a social enterprise focused on food and farming?

Too much to answer here…but a few key things.

First, we try to keep the final aim of what we want to achieve in mind when taking decisions about what to get involved in. It can sound grandiose to talk about changing the food system, but I find it helpful to ask myself – how is X helping us to get towards this goal?

I’ve also learned that people are the most important thing: whether as colleagues, farmers, volunteers, customers, stallholders and trying to see things from their point of view, can be a challenge!

Finally, we need to keep re-stating why we’re different; what’s beneficial about the alternative we’re offering. It’s easy to think that other people and the media understand the damage caused by the mainstream food system but we have to keep telling people – especially when there’s a lot of “greenwash” around…

Within good food retail/urban farming, what areas of excitement or opportunity do you see coming up in the future?

In the giant train wreck that Brexit is lurching towards, perhaps the one opportunity is the chance for people to not take their food supply for granted. Perhaps there can be more support for small farmers who farm in a sustainable way and provide jobs in their communities, and more awareness of the need for more skilled organic farmers – hopefully with some money and policy decisions attached!

What or who has helped you most along the way in establishing your career?

I’ve been really lucky to work for a small organisation early on in its development and have been able to follow things I was interested in. There’s also been a degree of flexibility in the early days of working when I had young children which has been very useful and which I do put down to having been working in an organisation set up and run largely by women!

What’s the most rewarding part of what you do?

Lots. Seeing the farmers having a good day at the market, hearing about the new land or people they’ve been able to take on, seeing customers having a good chat with them and telling them how much they love the produce, seeing our brilliant Dagenham Farm trainees getting the confidence to start shouting “lovely organic cucumbers” across a crowded Tube station, seeing local Hackney producers that we’ve worked with from the start get big orders, hearing from volunteers how Dagenham Farm has changed the way they feel, seeing everyone talking and chatting during the weekly volunteer lunch, seeing the tomatoes from the farm on my plate from my box scheme bag, putting people in touch with other people!

What new food campaign / project / initiative does London need the most or which existing one deserves more support?

I’d like to see more existing food businesses providing more paid training for getting young people – particularly from low-income families or lone parents – into jobs/careers in food and providing more support for this to happen whether it’s support on good childcare, secure accommodation, travel costs, self-confidence issues or otherwise.

Who’s your good food hero and why?

Good food hero – can’t just say one! It has to be several of the small farmers we work with – who work away year after year, in all weathers, producing good food in a sustainable way and treating their workers well : Adrian Izzard (Wild Country Organics), Martin Mackey (Ripple Farm) Sarah Green (Sarah Green Organics) Steve and Phil Hook, (Hook and Son)and Alison Bond for starters!

And lastly, what’s your guilty food pleasure that we probably shouldn’t be printing?

Check out others in the Roots to Work series, including the Urban Farmer, The Beekeeper, The Dietetic Coach.