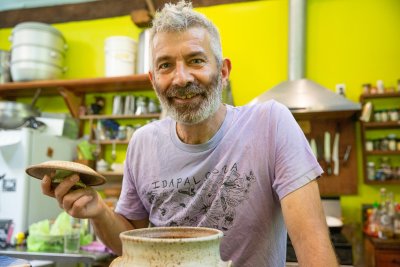 Fermentation revivalist and author Sandor Katz shares his passion with Muna Reyal, and considers whether the pandemic has inspired new interest in it.

I call myself a fermentation revivalist because when I started teaching people to ferment in simple ways at home, I realised that for many of them, fermenting was part of their family lore, but had fallen by the wayside. I see my work as a revival of the fermenting arts.

Fermented foods are more common that we think

Foods that people ferment are foods that grow easily and in abundance, like cabbage, wheat, milk, soy beans. Although it’s common to think of the more pungent fermented foods such as gorgonzola, kimchee and natto, fermentation is also how we make coffee, chocolate, vinegar, wine, cheese and yoghurt. Fermenting is actually integral to our daily diet, so it’s hard to call it a new trend.

Once a part of community traditions and recipes handed down through families, the art of fermentation has largely been centralised in factories and this, combined with a modern fear of bacteria, has meant that local knowledge of how to ferment has been lost.
But if the twentieth century was about convenience, the twenty-first century has seen more interrogation of how and where our food is produced. We are starting to see food as something we can make ourselves, rather than being the province of specialists. You could say that there has been a revival of the art, not of eating, but making. Since I wrote Wild Fermentation in 2003, I’ve been on a non-stop book tour because of this interest, travelling and teaching until the pandemic stopped me.

I would say that fermentation has been a trend, not for the last 18 months but for the last 10–15 years. The Human Microbiome Project also gave it a huge boost as that led more people to understand how important bacteria-rich foods are for our health. People are now interested in fermentation as a phenomenon and a process, and there is definitely a subset of people who want to make it part of their own kitchen repertoire.

Not all fermentation is a strategy for preservation. Nobody’s fermented a bean or a grain just to preserve it. You do it to make plain foods tastier – to stop bread from being a brick, for example. Cheese making was originally a way to preserve milk but now, when most people in the UK and US have a fridge, cheese making is about creating flavour and texture.

The fermentation scene in London

What excites me is what is common to all big, international cities – all those immigrant cultures producing foods from home that they can’t buy here. Fermentation is also about culture and food is about nostalgia – the smells, flavours and memories that we associate with our grandparents. We have an emotional response to these memories and so we try to recreate them when we relocate and pass them onto our children. When I come to London, I always visit my friend, Pao Yu Liu, who is originally from Taiwan and now makes pickles in London. She gave me the Taiwanese starter for mao dofu to make hairy tofu.

One thing that the pandemic has shown us is the fragility of the global food system. True food security can only be found in a decentralised food system and in expanding local food production. This means that fermentation can become part of this story, not as the most important thing, but as a part of the broader context.

Feel positive about the future

I think the realisation of the vulnerability of our food system has led to more people being interested in becoming food producers as well as consumers. Fermentation at home is a part of the process because you inevitably ferment more that you can eat so you become part of your local food economy, whether through sharing, barter or exchange. When I wrote The Revolution Will Not Be Microwaved about 16 years ago, one in a hundred people in the US were involved in agricultural food production. To my mind, that figure should be more like one in ten. That said, I am not absolutist about trade – wider food trade is still a positive thing and brings us rich diversity.

Use what you’ve got

What I ferment at any given moment is what I have coming out of my ears. Right now, my garden is full of daikon radish, so I’m turning it into kimchee, a Japanese style of pickle, and it’s also in my turmeric pickle.

With sauerkraut. It’s really easy and very safe. You don’t need any special equipment or starter and it’s as safe as food gets – statistically it’s safer than raw veg.

Interview by Muna Reyal (@munapic). Sandor’s new book, Fermentation Journeys, published by Chelsea Green, is out now. Sandor is currently touring the UK - details of his UK dates, including those in London can be found here.

Takepart in this fantastic giveaway to win 1 x free ticket (worth £30) to Sandor Katz's upcoming fermentation workshop at OmVedGardens on 30 june!

Open to our fab London Food Link supporters, you could enjoy a drink and some OmVed nibbles followed by a conversation between OmVed Head Chef Jo March and Sandor, and a demonstration of one of his recipes from Fermentation Journeys - all courtesy of Chelsea Green Publishing and Where The Leaves Fall. If you're already an LFL supporter, please check your inbox for how to enter or drop us an email.