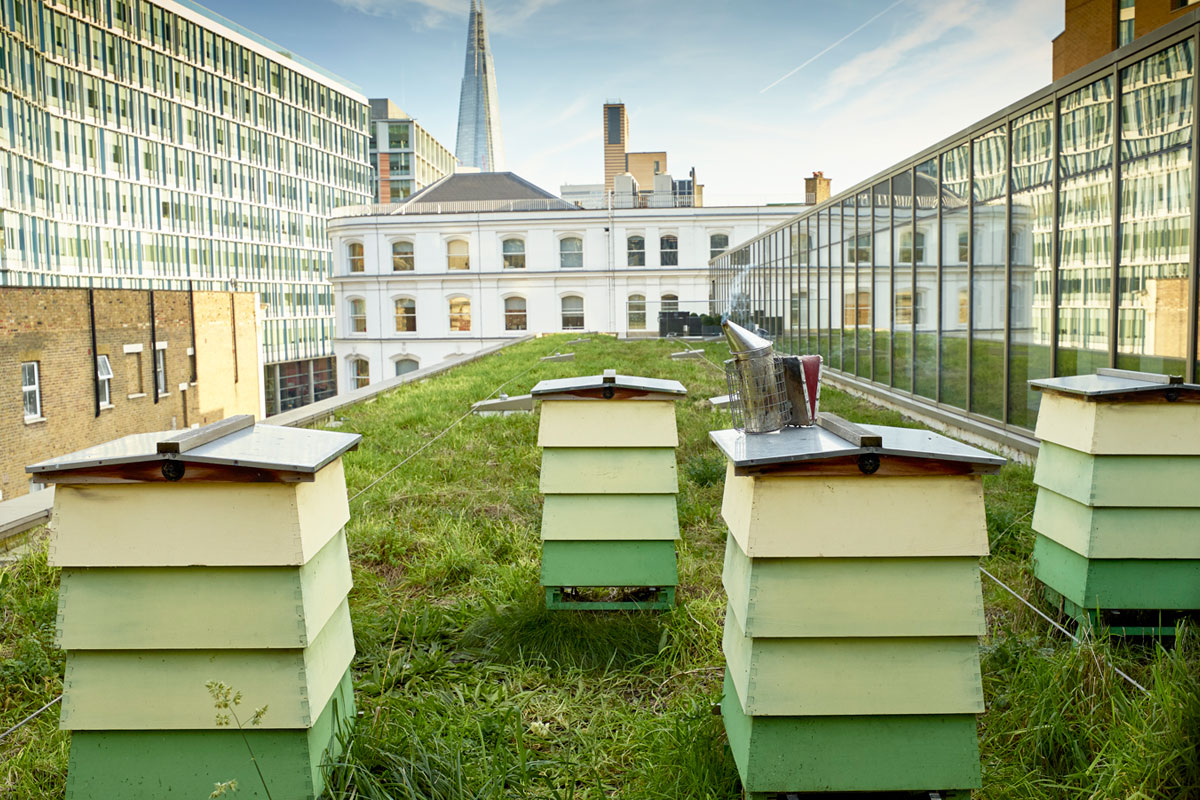 Bees do a critical job of pollinating our flowers and crops, with figures suggesting a third of all the food we eat is pollination dependent. But did you know the growing enthusiasm for urban beekeeping may be doing more harm than good? Katerina Gladkova investigates the urban bee crisis.

There are more than 20,000 known species of bee around the world, with around 270 species appearing in the UK. Among them, one is clearly the best-known: the honeybee. The majority of honeybees are kept in managed hives; our remaining bee population is wild, including 25 bumblebee species and more than 220 varieties of solitary bee.

Interestingly, bees possess unique characteristics, making them suited to pollinate certain plants. The early bumblebee’s small size and agile nature allows it to pollinate plants with drooping flowers. Garden bumblebees excel at pollinating the deep flowers, because their longer tongue can reach deep inside the flower. The diversity of bee species is therefore fundamental – wild bees specialise in pollinating the base of the flower, while honeybees prefer the top.

In recent years, wild bee populations have come under increasing pressure due to habitat loss and increasing pesticide use, with the proliferation of urban honeybees intensifying competition for precious food resources. “Shrinking green space has diminished the natural food resources available to all urban pollinators. [It is] estimated that an area two-and-a-half times Hyde Park is lost every year,” says Dale Gibson, co-founder of Bermondsey Street Bees, a sustainable beekeeping practice he set up with Sarah Wyndham Lewis.

While food supply pollinators have been decreasing, the last two decades have also seen a surge in the number of hives, often due to well-intended campaigns calling for people to save the bees. “The ‘Disneyfication’ of bees underlying the ‘save the bees’ message has had the unintended consequence of doubling the number of beehives in London. There are more than 5,000, currently,” comments Dale. “We are now well beyond the tipping-point, with new beehive introductions into London now very much part of the problem, not the solution” – something exposed by data, showing soaring disease contagion, higher overwintering mortality and low honey yields.

IT’S ALL ABOUT THE HONEY

The focus of urban beekeepers has been on the honeybee and while they experience pressure for nourishment, “they are very successful general foragers, often out-competing other species of wild bees and other insect pollinators, whose limited food sources are being stripped out by hungry honeybees,” says Dale. As a result, urban overcrowding puts wild bees and other pollinators at risk.

Carolyn Wilson, Capital Growth’s allotment coordinator adds, “A lot of people have heard that bees worldwide are in trouble and their well-meaning reaction has been to take up beekeeping.” She believes people need to learn not just about honeybees, but all the species. Many schools and community projects help by creating ‘bee hotels’, which are habitats good for solitary bees. “Learning about mason bees and bumblebees can be just as fascinating as studying a colony of honeybees.”

So, what can be done? “If we really want to help ‘save the bees’, we can deliberately plant these nectar-rich species in our gardens and green spaces and join the campaign against the continuing use of neonicotinoid insecticides in the UK,” Carolyn recommends.

This echoes Dale’s verdict. “Every window-box with flowering herbs, every patio with a tub of nasturtiums, every fruiting tree planted represents a tiny increment to the nourishment available to London’s pollinators.” And as a single bee colony requires 250kg of nectar and 50kg of pollen just to survive every year, he adds “if everyone considering the introduction a hive into London was to show how they intended to provide the new forage for their proposed bees, particularly in built up areas of London, that would go a long way to tackling the problem”.

Did you know our next Jellied Eel print mag is out now? Find a copy in a stockist near you.

Roots To Work: The plant-based chef