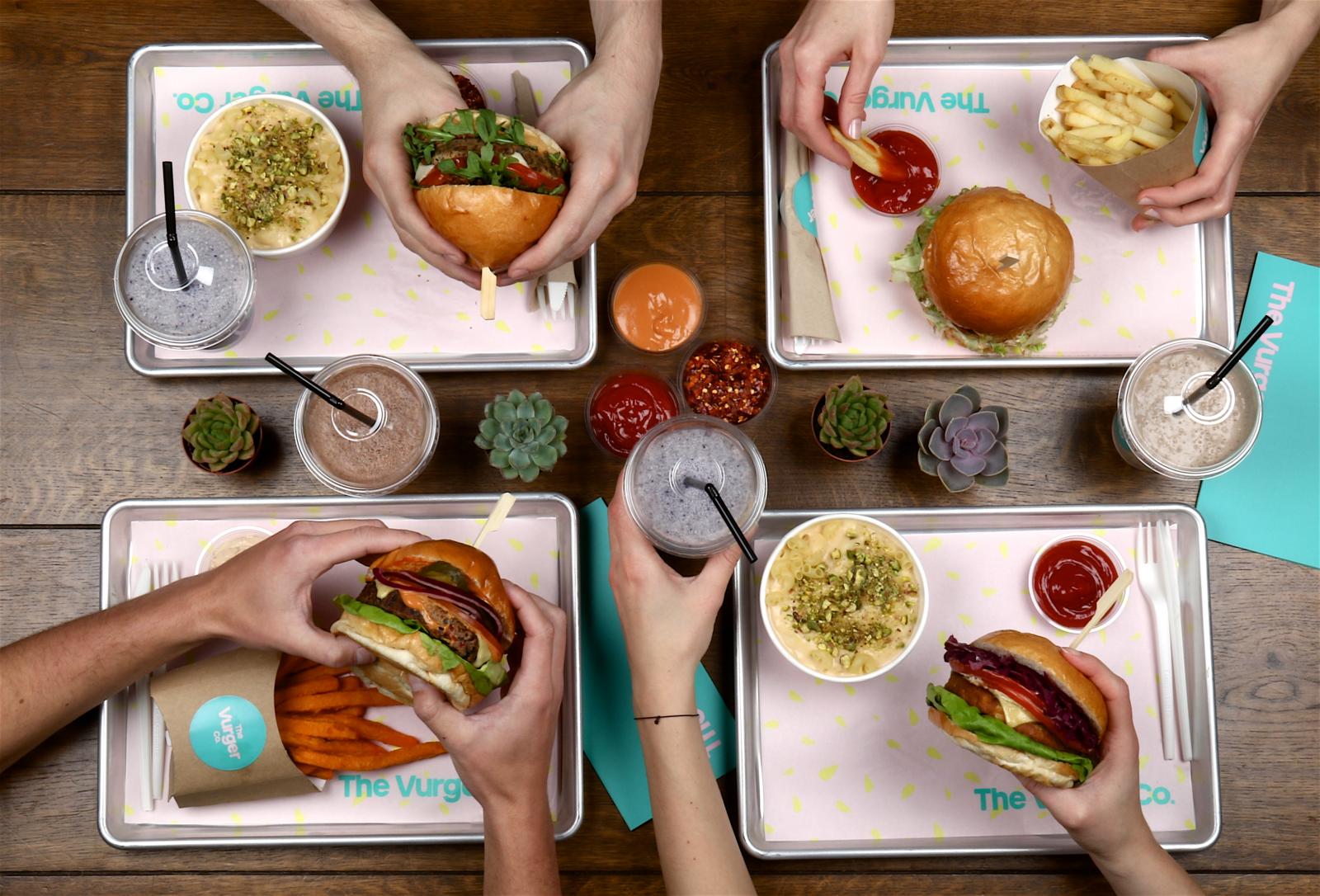 Here's our round up of the best good (vegan) food across London, in this special edition of Around Town.

East Dulwich, SE22
A hidden gem beloved by locals, this East Dulwich eatery is everything you want on an easy Sunday morning – delicious full breakfasts, plenty of caffeine, and fresh juices – all in a cosy, homely atmosphere with lots of natural light. With different combinations of vegetarian and vegan full English favourites, meals can be matched to any hunger state. The homemade ‘sausages’ are a fan favourite, and the mushrooms and spinach on toast are a healthier hit to any hangover.
Blue Brick Café

Bethnal Green, E2
As part of wellbeing charity St. Margaret’s House, the Gallery Café would fit well into the ‘Conscious Cafés’ section, but their winning breakfasts make them an East London brunch staple. There’s a full English to be had, of course, but pancakes, porridge, and superfood breakfast bowls are also on offer, and all can be washed down with good coffee, or the increasingly popular turmeric, chai, matcha, and beetroot lattes, all served with oat milk as standard.
Gallery Café
@the_gallerycafe

Brixton, SW9
This 100% vegan, low waste restaurant is a non-profit charity, and a living wage employer, who offer on-the-job training programmes for those facing problems finding work through traditional routes. The regularly changing specials combine plant-centric eating with comfort food to great effect – their recent seitan ribs special went down a storm with locals. Many also get a kick out of the décor – follow a spiral staircase to find a dining area overlooked by its namesake’s starry night sky.
Café Van Gogh
@cafevangogh01

Shoreditch, N1
A newcomer to the vegan restaurant scene, this spot faces plenty of great competition in Shoreditch, but has quickly won over Londoners with a wide and varied menu – and a pledge to donate all profits to animal rights organisation Surge. The all-vegan diner was set up by the campaigning superstar known as Earthling Ed, and with pancakes, waffles, burgers, sandwiches, and salads, this could be a great place to satisfy every member of a group.
Unity Diner
@unitydiner

Walthamstow, E17
Another low-waste non-profit, this organic and seasonally focused vegan café is much more than a place to eat – it’s a real community hub for Walthamstow and beyond. They host a market stall and veg box scheme in partnership with Organiclea, provide training facilities, host workshops on social and environmental issues, and much more. Even better – the food is great, thanks to its fresh and organic ingredients. This is another place to ‘vote with your wallet’, and know you’re making a positive impact with your diet, and to the local community.
Hornbeam Café
@hornbeam_cafe

Deptford, SE8; Peckham, SE15
A tiny wood panelled pub tucked into Deptford Broadway, this unassuming spot serves a great selection of veggie and vegan junk food, with impressive burgers, and some seriously more-ish loaded fries. With flavours inspired by the Southern US, this might be one of the only places you can try a vegan corndog this side of the Atlantic. There’s a solid brunch offering (featuring chick’n waffles), which can  be washed down with a boozy iced coffee or Bloody Mary. A more limited, but equally delicious version of the menu is also available from the kitchen of The Four Quarters in Peckham.
The Full Nelson
@thefullnelsondeptford

Shoreditch, E1; Canary Wharf, E14
For an earthier vegan burger that keeps its vegetables at the forefront, head to The Vurger Co. Served on vegan brioche buns, or bun-free as a salad bowl, these burgers are a new and improved version of the vegetable and bean burgers of the vegetarian dark days – and with two permanent locations, Londoners are loving it. The Vurger Co. gets extra points for fully compostable packaging, and organic/fair trade drinks offerings.
The Vurger Co.
@thevurgerco

Temple of Hackney & Temple of Camden

Hackney, E9; Camden, N1C
Lovingly referred to simply as ‘Temple’ by Londoner’s dedicated vegan junk foodies, or ‘a vegan fried chicken shop with queues down the street’ by the papers, Temple of Seitan remain at the forefront of London’s vegan food revolution. They have far outlived the ‘vegan fried chicken shop’ gimmick, and both the Hackney and Camden locations remain abuzz at all hours. And with good reason. This is where you’ll find some of the best vegan fast food in the city – the two pieces, popcorn bites, and wings, have an ultra-satisfying fried chicken style coating that can’t be beaten, and the burgers are equally as mouth-watering.
Temple of Seitan
@templeofseitan

Soho, W1F; Camden, NW1; King's Cross, N1; Dalston, E8
No selection of London’s best vegan offerings would be complete without a nod to Mildred’s. The original charming Soho spot has been open since 1988, but dated it is not. Just varied enough without being overwhelming, the menu includes veg-centric curries, a fantastic classic mushroom pie, and some really incredible desserts. Both celebrating classic dishes that happen to be vegan, and vegan-ising new favourites, any of the 4 Mildred’s locations is a great place for those making the transition to veganism, or a mixed-diet group. Or, well, anyone who appreciates good food. Read more in our review here.
Mildred's
@mildredsrestaurants

Brixton, SW9
A Brixton icon, Ms. Cupcake has helped put London on the vegan map, with truly impressive vegan desserts. This was the UK’s very first fully vegan bakery, and might still be the best. As well as an incredible selection of cupcakes (including a vegan cupcake interpretation of a Ferrero Rocher), there’s cake slices and bars, cookies, and other delights - this is the only place we’ve ever seen a veganised version of the Canadian classic Nanaimo bar. They also offer full size cakes, cupcake towers, and giant cookies made to order, for wedding and special events, and have a cookbook with fantastic reviews.
Ms. Cupcake
@mscupcakeuk

Soho, W1F
The answer to so many vegan prayers, Yorica! offers class soft serve ice cream in various flavours, made customisable in size and a range of toppings from fruit to sprinkles. This is the kid’s birthday party you always wanted, but with serious ethics. You can even get a ‘goody bag’– Yorica! now also sells ice cream tubs to enjoy at home, also available at Ocado. All ice creams are free from 14 major allergens, as well as being completely vegan.
Yorica!
@yoricamoments

Hoxton, N1
Impressive on so many levels, CUB is a figurehead for London’s whole food culture, not just for its vegan/vegetarian leanings. Founded in part by Doug McMaster, the dedicated pioneer of Brighton’s Silo, the UK’s zero waste restaurant, CUB’s commitment to sustainability is visible across the whole restaurant. The table tops are made from repurposed yogurt pots, to create a beautiful white surface marbled with silver from the foil, and the serving platters are made from compressed plastic bags, not that you would ever know - the restaurant is ultra-sleek and contemporary. What isn’t recycled, however, are the flavours on the menu. Mind-boggling combinations, such as pumpkin seeds and oil, white caramel, and douglas fir, are detailed to you by the chefs who visit your table, and help make this an experience for all the senses. They also focus on using overlooked parts of plants and food by-products, such as broccoli stems and pineapple weed. The priciest on this list, CUB might be a special occasion visit, but a special occasion it will be.
CUB
@lyan.cub

Battered
Brick Lane, E1
A vegan fish and chip van that lives up to the hype:
@battered_v

A new kid on the block this start-up is currently focusing on catering but with their fine range of healthy, flavoursome vegan burgers. This social enterprise is also giving a percentage of profits to help combat holiday hunger. We think it won't be long before we see them popping up! Check them out on our Good Food Map.