Up in your grill 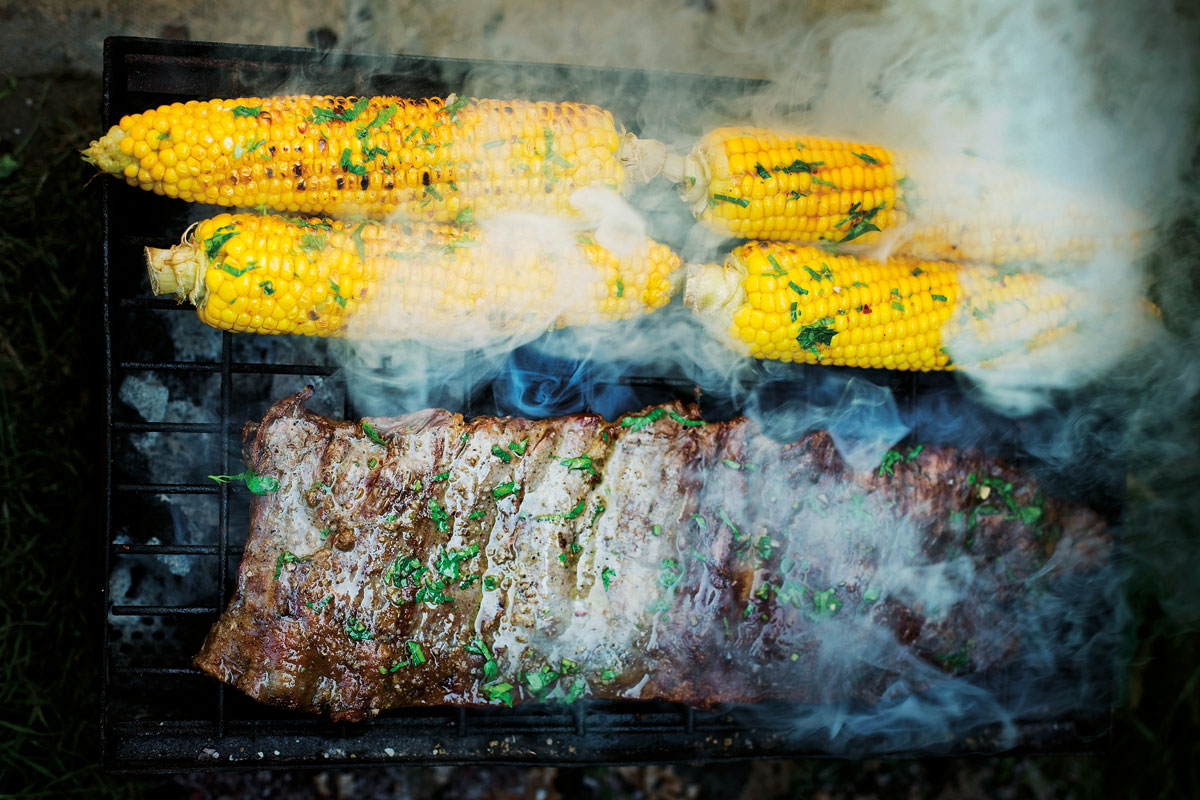 The British barbecue can be one dimensional to say the least. At worst it’s a suspect sausage fest or tinfoil insta-grill of blackened, but still raw, caged chicken. It doesn’t have to be that way, says our resident chef, Tom Hunt.

When I host a barbecue these days, the control freak in me no longer allows guests to bring contributions. No matter who you invite, at least one person will arrive with the worst possible factory farmed meat – perhaps a string of shocking-pink bangers, startled into their false shade by an unsettling number of colourings and e-numbers, or maybe some flabby chicken wings coated in a toxic slime of aggressive flavourings and imitation smoke.

A barbecue is a chance to celebrate summer and its abundance of fresh, seasonal vegetables. In fact most summer veg take well to the grill: aubergines, broccoli, courgettes, pak choi, chard and spring onions are all delicious tossed in a little olive oil and blackened over charcoal. If you’d like to be more adventurous, try grilling artichoke hearts and serving them with goat’s curd and honey, or grill pre-boiled beetroots, crushed in their skins and tossed in herbs and olive oil, until slightly blackened. Hell, even skewer your strawberries like a kebab and char before serving with vanilla ice cream and a pinch of black pepper.

Though a good grill doesn’t necessarily need to include meat, serving a good proportion of such seasonal vegetables and exploring a variety of interesting cuts from higher-welfare animals will still allow you to satisfy any fire-induced Palaeolithic urge on a budget. Once such cut is bavette steak.

Corn on the cob with bavette steak and chimichurri

Chimichurri is an Argentinian condiment made from herbs with a touch of chilli. Traditionally it is served with beef but it goes really well with most grilled vegetables.
(Serves 4 as a main course or many as a snack)

Mix together the chimichurri ingredients. It gets better with age so ideally make it in advance.

Light your barbecue and wait until your coals are white hot, then spread them out evenly.

Rub the steak well with olive oil and season. Char on one side then turn and char the other side equally. If you like your steak rare, remove it from the direct heat now and allow it to rest for a few minutes. If you like your steak medium, then turn it twice more and cook for a further minute each side before resting. Barbecue the corn at the same time as the steak, turning frequently to brown evenly. Once the steak has rested, slice across the grain, then smother it and the corn in chimichurri.

This feature first appeared in The Jellied Eel magazine issue 54, May 2017