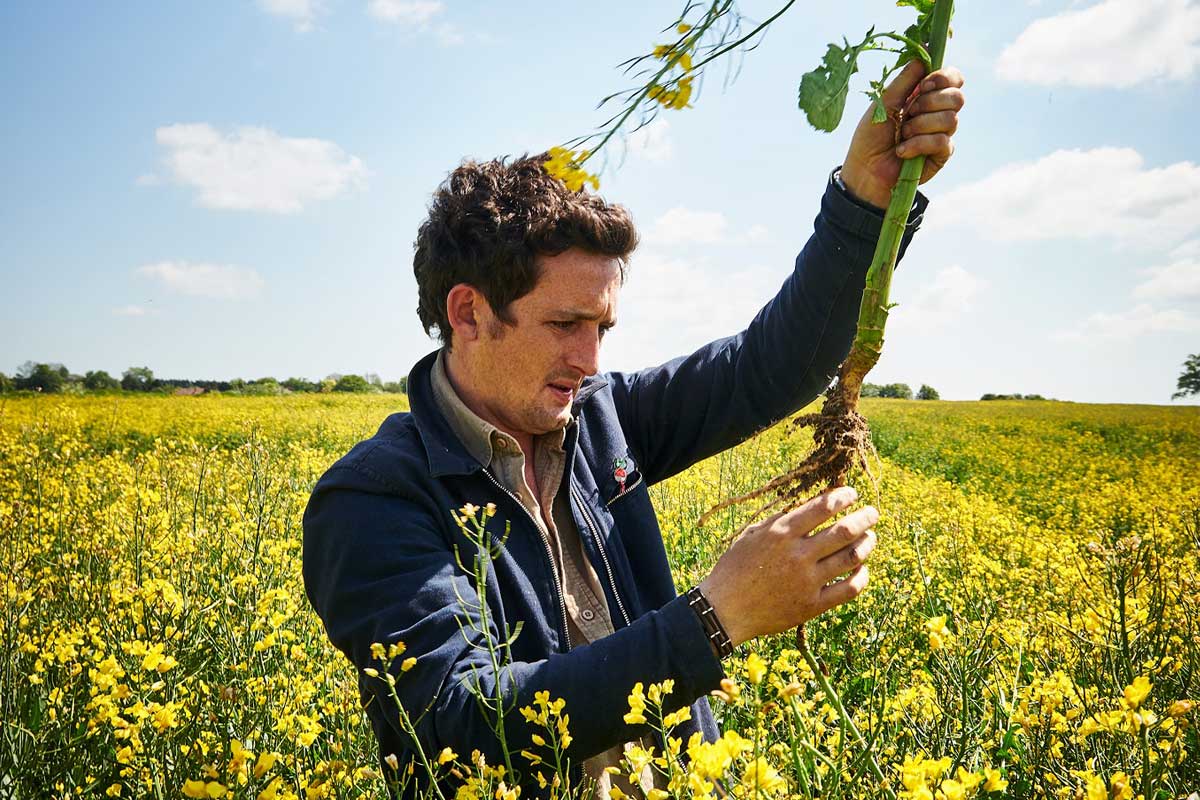 Connecting oil to soil and farm to kitchen, Oscar Harding tells Muna Reyal how he is farming for the future.

It all began in 2012 when Oscar started to wonder what he could do about the growing disconnect between what we eat and where it comes from. Located in Hertfordshire, Duchess Farms has been in Oscar’s family for six generations. The farm is named after his great grandmother, whose drive for new directions inspired Oscar to protect not just livelihoods, but the future of the land and environment. “The soil is our thing,” he says, “I farm to make the soil better.”

‘I farm to make the soil better’

Oscar uses a four-way crop rotation to care for the soil. This involves one kind of wheat followed by another, rapeseed in the third year and finally a crop of beans. The beans both rest the field and feed the soil as they convert nitrogen from the air into nutrients. This is slowly becoming a five-way rotation as Oscar introduces herbal leys – a mix of 16 different types of grasses and flowers. These leys also rest the soil but have the added benefits of building up organic matter, improving soil structure and providing homes for worms, bees and bugs.

FROM SOIL TO OIL

Rapeseed is Oscar’s main crop but he isn’t interested in supermarket retail and its pressure on productivity over quality and care. Instead, the oil is pressed and bottled on the farm without heat or chemicals. Cutting out the vagaries of market prices, Oscar works directly with chefs in London to produce an oil that is full of flavour and nutrients. As well as being able to farm to specification, the approach shortens the production chain and reduces food miles.

‘Great things happen when we work with new people’

The farm also cultivates 30 acres of heritage wheat which E5 Bakehouse mills into flour for its Hackney Wild bread. Oscar clearly values this partnership, excited that two railway arches in Hackney manage to support such quantities. The bakery purchases the wheat a year in advance from Duchess Farms as well as others – a credit to E5 and their customers whom, Oscar says, are directly helping to feed his soil.

Every week a truck takes both the oil and grain to Hackney, but it doesn’t return empty. The driver picks up the would-be waste from milling and Oscar turns this into rapeseed cake by mixing it with waste from the oil production. These cakes aren’t for Oscar’s mid-morning snack though; they are an eco-feed for his small herd of cattle. Oscar considers growing feed for animals unnecessary and his closed-loop system certainly shows how things can be done differently.

Oscar describes his farm as “conservation through commerce” but his business pragmatism doesn’t hide his passion and commitment to the land. Untangling as many knots in the chain as possible, his enthusiasm for working with chefs and caterers - rather than commodity markets - is infectious. As he says, “great things happen when we work with new people.”