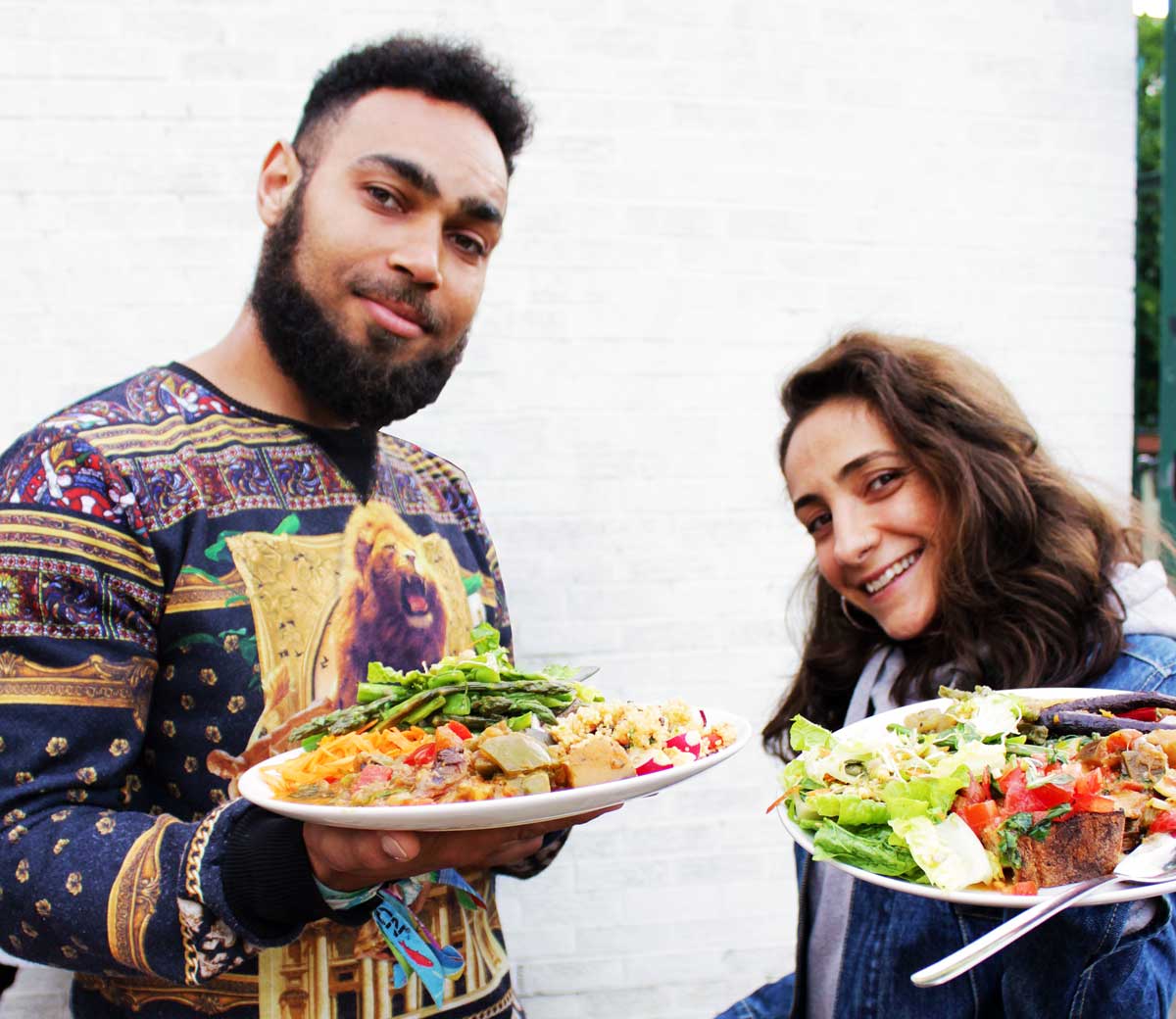 Ellen Baker meets ladle-wielding Londoners who are getting the city sitting round the same table.

It’s not often you find yourself overseeing the production of a banquet of vegan sushi rolls with ten complete strangers in a lime green community hall on a Friday night. But oddly, it turns out to be the best way to kick off your weekend. This is the mad and marvellous world of community cooking – doing away with the avoid-eye-contact-on-the-tube mentality and getting people who’d never usually interact sitting down together to a great big meal – for free.

Community kitchens have taken off in a big way in London, filling a gaping social and economic need. Some provide a free, hot meal to anyone who wants it, one or more days a week; others teach participants how to make good, real food at home. But where did it all start?

Feeding the capital – a background

Soup kitchens, people’s kitchens, volxküche... all names for places where unrufflable volunteers rustle up a feast on minimal resources.

We start off with the very old Sikh langar concept, still practised, of temples offering vegetarian freebies no matter your creed or colour. And the soup? In the 19th century, one Count Rumford (née Benjamin Thompson) was tasked with nourishing the Bavarian military on a shoestring. He came up with the optimum budget broth - and in so doing invented the crouton, apparently.

Soup kitchens went on to feed many thousands of people in need. In the UK, they helped power the Industrial Revolution, until such ‘handouts’ were outlawed. The Irish Famine soon brought them back, however, with the Soup Kitchen Act of 1847. Now, in response to global food price rises, prolonged austerity and pay freezes, ‘private food relief’ is needed more than ever.

I have never seen so much moussaka in my life as I did at Foodcycle’s Hackney Hub one drizzly Thursday. I arrived to towering egg salads, sautéed okra and couscous being handed out – and that was just the starter. The hub is staffed completely by volunteers, and coordinated from Foodcycle’s central hub. “Post-Grenfell, I realised I live in a community I know very little about,” explained jazz musician Kate Mullins. “And it’s so easy to volunteer.”

In an altruistic reimagining of Ready Steady Cook, all food is donated by local shops and turned into a cohesive meal for dozens on the day. “It amazes me how broad people’s tastes are,” host Natasha Chetwynd tells me. “And how appreciative people are.”

I underestimated the sense of community that volunteering at Made in Hackney would give me. Courses bring a cluster of totally unrelated people together each week, to learn how to cook hearty, purely plant-based dishes on an impressive budget.

Hosting reminds you of things you didn’t realise you knew about knocking together a meal and participants realise they have plenty to share too, notably a whistlestop tour of tropical fruit given to us by a life-loving painter-decorator.

Born out of Dalston, The People’s Kitchen now holds fortnightly Buffet Banquets in an adventure playground in Bethnal Green, again run by volunteers and conjured with surplus produce sourced from nearby greengrocers and organic suppliers.

"It’s bigger than food. You don’t need to speak English, be an extrovert, be great at cooking, or have money. It takes away a lot of boundaries"

“It’s bigger than food,” says coordinator Kiran Chahal, whose aim is to build bridges in a “diverse but disparate” community. Diners can donate or simply partake: “You don’t need to speak English, be an extrovert, be great at cooking, or have money. It takes away a lot of boundaries.”

Café from Crisis is there to get vulnerable people back on track. Whether trainees are facing homelessness, or have just served a prison sentence, it’s a chance to gain hospitality skills, stability and a solid sense of belonging. Café manager Jeremy Wood says they have two sets of customers: those who eat there and those who train there. “One guy was sleeping rough,” Jeremy told me. “He’d come in every morning having spent the night on a night bus. He got really into coffee and he’s just been hired as a barista. There’s so many success stories.”

This isn’t a soup kitchen, it’s part of a breed of community-hearted social enterprises changing Londoners’ futures. And that, says Jeremy, is “a growing movement.”

Crying out for community?

Whether it’s triggered by greater awareness of social need, or by a time of greater and growing need, community cafés and kitchens are becoming a prominent feature of London’s patchwork and they always need more volunteers. Satisfaction is guaranteed: you will always come away from a soup kitchen with more than a bowl of soup.