The Food, Farming and Countryside Commission, coordinated by the RSA, was launched in November 2017 to consider how we can achieve a safe, secure, inclusive food and farming system for the UK, a flourishing rural economy and a sustainable and accessible countryside.

The two-year long Commission aims to help make the case for change to build a fairer food and farming system, ensuring a sustainable future for the UK’s countryside.

The launch of the Food, Farming and Countryside Commission coincided with the UK looking to overhaul its food policy as it is set to leave three separate but overlapping European institutions which have underpinned the UK’s policy for the last 40 years:

The Food, Farming and Countryside Commission is chaired by Sir Ian Cheshire. He leads the Commission’s work on what a new system could look like: protecting standards and securing food supply; reforming public investment and the livelihoods of rural communities, and making the most of any new trading opportunities.

The two-year programme, supported by the RSA in a secretariat capacity, will:

Read Sustain chief executive and Commissioner Kath Dalmeny's comments on early deliberations of the Commission, in relation to farming, rural economies and health.

Sustain served on the steering group that helped with establishment of the Food, Farming and Countryside Commission, working with others to help the RSA develop the proposed programme, which they now coordinate.

The Food, Farming and Countryside Commission is financed via a major two-year grant from the Esmee Fairbairn Foundation, which aims to improve the quality of life for people and communities throughout the UK both now and in the future. The Foundation does this by funding the charitable work of organisations who are building an inclusive, creative and sustainable society: www.esmeefairbairn.org.uk 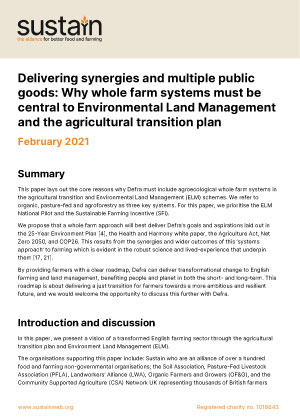 Delivering synergies and multiple public goods: Why whole farm systems must be central to Environmental Land Management and the agricultural transition plan