Guest writer and speaker at the Sustain summit, Rob Percival looks at the current meat debate and wonders if our irrational assumptions are what hinder consensus. 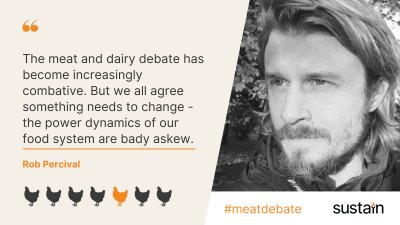 In recent years the meat and dairy debate has become increasingly combative. Contradictory narratives have jostled for attention. Should we all go vegan? Is the lab-grown meat the answer? Are grazing animals the hero or the villain?

It seems, for the most part, we all agree something needs to change. The climate crisis is escalating. The natural world is in decline. Many people are hungry or unhealthy. The power dynamics of our food system – whether seen through the eyes of a farmer or a farmed animal – are badly askew.

Yet, while we agree ‘something’ needs to change, there seems to be less consensus regarding the crux of the issue, especially in relation to meat and dairy, or the best solutions.

Sketched below are four contrasting narratives. Each offers a diagnosis of the meat and dairy issue. Each proposes a solution. At first glance, the common ground between these narratives feels thin. This blog asks whether we might reach a more consensual view.

The crux of the problem (this narrative says) is escalating demand. People need to eat, the global population is growing, and demand for animal foods is rising. Meeting this demand, as we must, requires that we scale up production. We need to produce more food while reducing environmental impacts. Efficiency is key. The goal should be to produce ‘more for less’ – sustainable intensification.

There is no evidence, after all, that most people want to go ‘plant-based’, and meat and dairy are nutritionally important. By breeding livestock to be more efficient, improving feed formulations to reduce methane, and designing intensive housing systems that optimise productivity, we can square the circle. British farmers are leading the world in this regard. The best thing to do is ‘buy British’.

NARRATIVE #2. TECHNO-FLESH TO THE RESCUE!

Credit where it’s due (this narrative says), the ‘sustainable intensification’ advocates have diagnosed the problem correctly: demand for animal products is indeed immutable, or at least too entrenched to be rapidly shifted. But the answer is not more efficient animal farming, for we now have an alternative – cows are an outdated technology.

Precision fermentation and cellular agriculture are accelerating towards commercial viability. When compared with their ‘naturally’ produced counterparts, lab-grown meat and dairy, and other novel proteins, are ecologically and ethically superior. We need these technologies if we are to weather the coming storm. It’s frustrating therefore that ideological NGOs and farming groups, fretting about ‘ultra-processed foods’ and preaching a utopian ‘less and better’ message, succumbing to what seems to be a knee-jerk aversion to novel tech, are failing to endorse cellular ag as the solution.

NARRATIVE #3. AGROECOLOGY IS THE ANSWER!

Not so fast (this narrative says). Have you considered that your faith in technology might be misplaced? Has it occurred to you that we won’t resolve these crises with the same thinking that helped create them? An overt focus on efficiency savings and techno-fixes connotes a reductionist mindset and might even make matters worse, reinforcing corporate control over the food system.

It’s really a question of balance. We need to reconfigure societal relationships and our relationship with the natural world. By closing nutrient cycles, turning waste into inputs, farming regeneratively, and redistributing power across the system, we can nurture healthier soils and healthier people. Yes, we will need to eat differently, but livestock are integral to the agroecological solution.

Guys (this final narrative says), stop prevaricating, the answer is staring us in the face. Just stop farming animals and eat plants instead. Meat is not only environmentally damaging; it is cruel and unnecessary. Imagine if the world adopted a plant-based diet. Think of the land that could be freed for rewilding! A just resolution to the climate crisis necessarily involves justice for farmed animals.

It sometimes feels like we talk past one another. These narratives are simple caricatures (most people are more nuanced in their view), but on a societal level they can act as self-contained ecosystems, each backed by a partial body of science, each forming an internally coherent worldview. We speak as though from distant planets.

In a paper ‘Gut feelings and possible tomorrows’, written for the Food Climate Research Network, from which these four narratives are (loosely) derived, Tara Garnett suggests that to bridge the gap we must attend to the unarticulated intuitions and instincts that give these narratives their shape.

We are not the rational actors that we often pretend to be. Our stance in the meat and dairy debate (and each of these narratives) is invariably predicated on a host of assumptions – assumptions about the likely pace of technological innovation; the capacity of policy makers to act; and the mutability of human behaviours. These, in turn, are founded less upon rational analysis than deep-rooted instincts about the world we inhabit – gut feelings concerning the sort of creatures we are, what may or may not be changed, and the ethically non-negotiable.

If we hope to build consensus we will need to attend to these gut feelings. Before we set out to persuade others to adopt our chosen view, we would do well to ask: To whom are we speaking? What do they value and why? What ideological framing is implicit in their reading of the evidence? Have we understood the intuitions and instincts that shape their stance in the debate? And perhaps most importantly: Have we tried to understand those that shape our own?

Join us to take part in the #meatdebate.

Book your tickets now for the Sustain Summit 12 October

Rob Percival is a writer, campaigner and Head of Food Policy for the Soil Association. The Meat Paradox is his first book. He will be speaking at the Sustain Meat Summit.

Rob Percival
Head of Food Policy for the Soil Association