How much do you get by converting just 1% of peri-urban land for fringe farming? Hint: a lot!

How can the multiple benefits of fringe farming be quantified? Some initial calculations based on OrganicLea as a model agroecological farm revealed impressive numbers for the prospect of converting available land in the urban fringes. 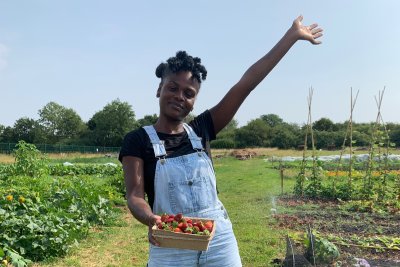 Fringe farms grow food agroecologically in peri-urban areas surrounding towns and cities up and down the country. Farming agroecologically means generating benefits for both people and the planet. Nonetheless, we need to make this message convincing to policy makers and using evidence that is backed by numbers can be an effective tool.

I based my calculations on data from OrganicLea, a 'model' fringe farm on the edge of London in Enfield. The farm produced 11.7 tonnes of fruit and vegetables from a 0.66 hectare plot in a 2019/20 farm calendar year (i.e. November 2019 to October 2020), which is equivalent to £64K. Staffing for roughly the same period was approximately 3.5 FTE. Scaling these numbers up, I found that:

Converting just 1% of peri-urban land to agroecological market gardening* would lead to over 530K tonnes of fruit and vegetables, or £3B in value of production, and 160K FTE jobs.

The amount of available peri-urban land was not simple to determine, largely because what can or cannot be defined as peri-urban (also known as the rurban or hinterland) is not officially recognised in the UK. What is classed as ‘urban’ by the Office for National Statistics is clear, i.e. places with populations of 10,000 or more, and so ‘rural’ can be defined as anywhere else. However, there is no official distance from these urban areas that can be applied to draw what is the grey area of the peri-urban: that which could be said to be both neither rural and urban, and a mix of the two.

From a report from the UK countryside charity, CPRE, “Around 22%, or just under 3 million hectares, of England’s land area consists of countryside within 5km of large towns and cities with populations greater than 100,000”.  The same report quantifies the 14 Green Belts of England as covering 1.6M hectares, which is 53% of all peri-urban land (as the report defines it). Hence, for the purposes of my calculations, I used 3 and 1.6 million hectares as ‘good enough’ quantities of peri-urban land in England.

It is useful to recognise Green Belt land as a proxy for the peri-urban because of both its geography and function, as determined by a history of policies. This was covered in my previous blog post, but essentially the Green Belt’s main purpose has always been to restrict the urban sprawl by protecting the land on city edges from development.

With this in mind and based on the same OrganicLea data, converting 1% of Greenbelt land only for fringe farming would lead to more than 280K tonnes of fruit and vegetables, or over £1.5B in value of production, and 85K FTE jobs that are close to the market and possible source of labour.

What do the calculations tell us?

Besides giving us large numbers to quantify the benefits of fringe farming, the calculations reveal an important message about small-scale farming. This is because these numbers are relevant for a situation in which fringe farms were multiplied rather than made bigger (scaling out rather than up), so many OrganicLea farms rather than a gigantic OrganicLea farm.

The important implication of this is that these farms remain innately labour intensive, which is a characteristic of small-scale agroecological growing. Having more people working on smaller sizes of farms is an alternative to larger farms that have replaced labour with technology, predominantly machinery (e.g. in preparing the land and harvesting) and chemicals (e.g. as weed and pest control). While the latter is vastly more efficient in terms of how much it can produce per person, it cannot always be said to be more productive, especially when you take into account what the farm generates besides harvested yield weight.

What I mean by this is that labour intensive farms by definition create more jobs, which can boost local economies, enterprise and entrepreneurship. This can be helpful for community resilience and can build engagement with communities so they better understand how their food is grown. Moreover, having a higher labour-to-land ratio puts smaller-scale farms in a suitable position to have farmers that are more on the ground (also literally!), and so more aware of what is happening on and around the farm. Collective considerations can more easily and intuitively be made of overall farm health, as well as the health of the wider environment and communities to which it is intimately connected. Understanding how assets can beneficially interact for making space for pest predators and pollinators, building carbon stocks via trees, shrubs and protecting soils, and climate adaptation tools such as water retention and flood alleviation can also be valuable outcomes.

With this in mind, the prospect of lots of small-scale farms rather than larger ones, could help curb, or likely reverse, losses in soil health and soil per se, biodiversity and general ecological functioning. Having a larger farm labour force could also preserve or even boost skills, cultural knowledge and traditional practices in terms of what to grow when and how, how to prepare and cook farm produce, and so also how to eat well.

Perhaps bigger isn’t always better but rather, as EF Schumacher pointed out, small can be beautiful too.

You can sign up to our Sustainable Farming newsletter here.