Food hubs have been circling as a concept to increase supply of local food and shorten supply chains for many years, but perhaps finally their time has come. Martin Yarnit explores their potential for responding to the opportunities and needs exposed by the events of the last year. 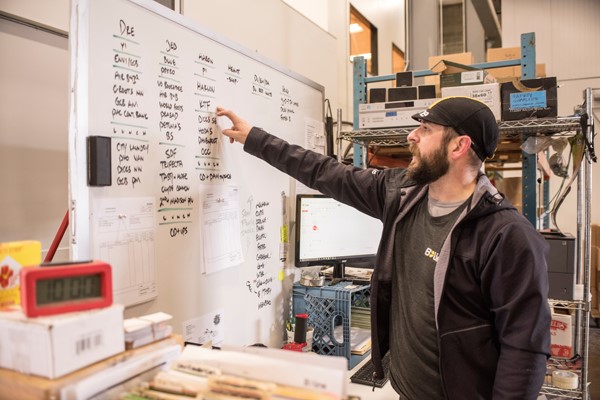 “We want to see Hubs in areas of high food insecurity to improve access to healthy food and basic cooking lessons. With Government support, the Hubs would be at the heart of our communities. They would offer a sharing scheme for donated food; provide a marketplace for local producers; deliver food boxes for local households in need; and their kitchens could be used to support local people with cooking skills and nutritional advice.”

One benign effect of the pandemic has been to stimulate the growth of local food partnerships, linking councils, the NHS and community organisations, aimed at tackling food insecurity, food waste and health issues and more broadly at creating local food strategies. These partnerships, however, like the whole fabric of local public health provision, suffer from a lack of funding and government support. As he puts the final touches to the second part of the National Food Strategy, Henry Dimbleby should consider a national investment programme for local food centred on food hubs.

As well as strengthening the classic elements of public health – environmental health officers and child nutritionists – such a programme should also invest in local food infrastructure. It should build on and expand the myriad of initiatives that have evolved over the last decade or so including food boxes, Community Supported Agriculture (CSA) and food hubs. The lockdown period has seen a dramatic upsurge in this sector but it continues to suffer from two weaknesses: fragmentation and lack of scale.

In the US, a national network of food hubs has demonstrated their potential to tackle these problems. Set up with federal support  in 2008, more than 200 hubs have acted as a catalyst to strengthen local supply and distribution chains, enabling market access for small and medium sized farms, and  providing a   comprehensive year round offer that meets the needs of institutional and household consumers alike. Co-managed by producers and consumers, and committing to fair prices for both, food hubs tend to provide a higher return to farmers than supermarkets.[2]

Over time, the US hubs, besides their core business of aggregation and distribution, have responded to local need with a series of related functions such as providing incubation space, supplying food deserts, and improving the quality of school meals. They act as obvious centres for drawing together the many stakeholders in local food markets, replacing fragmentation with cooperation. Many hubs have grown their supply and distribution chains, becoming self-sufficient. Common Market, from its base in the old Philadelphia stockyards has expanded down the Atlantic coast, opening depots in Atlanta and Houston. US food hubs are scaling up operations using sophisticated IT systems to extend their reach and manage logistics, and drawing on public procurement policies.

Properly supported, food hubs could make a major contribution to improving the UK’s diet, making good food more affordable and accessible in every community. There is no better way of boosting the supply of home grown fruit and vegetables than by increasing farmers’ share of the value of what they produce.  In this country, Tamar Local Foods takes just 18p in the pound of what it distributes, Riverford Organics just over 50p – a record that supermarkets would find hard to match.

Already in the UK, food hubs are beginning to spawn a range of functions in addition to their core job of linking producers and consumers. They deliver food parcels to the elderly, help with the distribution of surplus food, run cooking classes and promote urban farming. They could also act as the focal point of a campaign to phase out dependence on food banks as an unofficial arm of the welfare state, perhaps through the introduction of a food entitlement voucher for households in poverty that could be spent in supermarkets or farmers markets. They could work with local authorities to draw up registers of land suitable for farming and support new entrants to the industry.

Just as we should expect a health centre or children’s centre in every neighbourhood, it makes sense to plan for a network of local food hubs. The US experience shows that with secure funding from a mix of sources coupled with a diverse range of customers, hubs can become self-sufficient in the medium term.

The benefits of food hubs are becoming widely recognised with significant calls for funding from, amongst others Professor Corinna Hawkes, City University[3] , Hubbub, the environmental charity that runs community fridges, The National Food Service [4], and Local Trust that funds 150 left behind neighbourhoods [5].

What would it cost to set up food hubs and how would they be paid for? Based on the US experience, a pump priming investment of £500,000 per unit coupled with public procurement could generate a surplus within three to five years [6].  Potential sources of funding include the Big Lottery, dormant accounts (the proposed Community Wealth Fund), the Stronger Towns Fund and the proposed Shared Prosperity Fund as well as the private and charity sectors.

An additional benefit of investing in food hubs is building consumer pressure.  We have seen how, in the course of the pandemic, supermarkets have adapted their procedures, introducing home deliveries on a massive scale and switching business to smaller, local stores. We have also been able to observe how supermarkets have learned from farmers’ markets and other alternative retail initiatives, introducing more organic lines and promoting supplier provenance.

However much supermarkets shift, their model is one that without severe regulation is unlikely to provide the multiple benefits that more localised and fairer food systems offer. Food hubs and, in its broadest sense, local food infrastructure, could provide an alternative, but will need investment and policy support to achieve these benefits at scale. There has never been a greater need, with the country looking for ways to build back better, and with the country’s most fundamental rewrite of food and farming policy for over seventy years, never a better opportunity.

[2] See my report on US hubs and Italian coops for the Winston Churchill Memorial Trust at https://www.wcmt.org.uk/sites/default/files/report-documents/Yarnit%20M%202017%20Final.pdf

[3] “Investment is needed in local food supply chains too, connecting smaller and more sustainable producers of nutritious foods to consumers who need them most… Food hubs that bring food from producers to commercial customers or direct to consumers are also growing.” Five Ways to Reboot the Global Food Economy,  Fresh Produce Journal, August 20 - http://www.fruitnet.com/fpj/article/182607/five-ways-to-reboot-the-global-food-economy

[5] Research for the Trust calls for improved civic infrastructure such as community centres, libraries, green spaces and to improve connectivity and community engagement.

Martin Yarnit is a freelance writer and researcher interested in local food initiatives and bottom up democracy. He studied support for small producers in Italy and the US in 2019 on a Winston Churchill Memorial Trust funded visit. He played a central role in creating a cooperatively owned and run village shop and local food centre in Herefordshire. He is the author of the e-book, Foodlovers' Bologna.