A marriage made in leaven 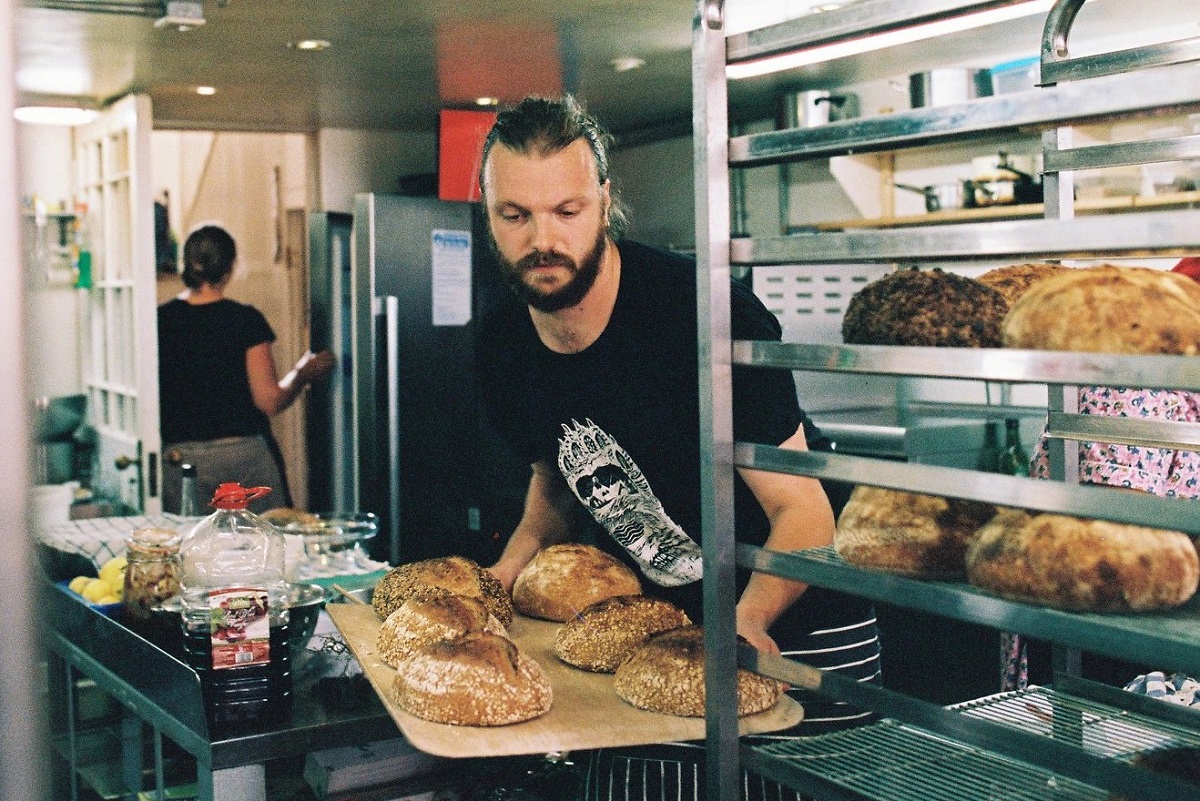 Genuine sourdough bread begins with a starter culture, a living and (sort of) breathing entity. It’s a mixture of flour and water in which two types of microorganism – yeasts and bacteria – feed, reproduce and emit gas and other by-products. This process is known as fermentation.

Let’s delve in a little deeper: When flour is mixed with water, the yeasts that are naturally present (so some people refer to them as ‘wild’) produce an enzyme called amylase. This enzyme breaks down complex starches, which make up the majority of flour’s composition, into simpler carbohydrate (sugars - glucose, fructose, sucrose) which the yeast cells can metabolize. This process also gives the lactic acid bacteria, also naturally present in the flour, access to maltose, the by-products of which are also metabolised by the yeast. Metabolism of all these sugars by fermentation releases carbon dioxide. When captured - within the gluten structure of a well-developed wheat dough, for example - this gas causes the dough to rise. This is known as leavening.

Most people probably assume that yeast is the most important aspect of the fermentation process, but with sourdough the bacteria are equally important. In fact, the lactic acid bacteria outnumber the wild yeasts by approximately 100:1. A starter culture is not able to stabilise (this refers to the resilience of a culture and therefore to its ability to consistently perpetuate itself) unless lactobacilli are present.

Partly because of the acidic conditions (around pH 4 – 4.5) that develop within this symbiotic fermentation process, unwanted (and potentially harmful) microorganisms aren’t able to gain a foothold. Some of the natural preservative effects of a sourdough starter also continue on in the baked bread.

The future’s in your hands

Yeasts and lactic acid bacteria are all around us: Including in the air, and in greater concentrations on cereal grains, hence in flour. Recent research suggests that some of the yeasts and bacteria that end up in a starter and dough might come from a baker’s hands, and vice versa. In a way it’s a profound idea to me: That we didn’t just stumble upon an accidental process ten thousand years ago, when our ancestors first made sourdough in the Fertile Crescent or on the banks of the Nile; yeasts and bacteria that are actually part of our make-up, part of our biome, set to work on our unleavened dough to ferment it, and thus transform it into something even more fundamentally human; holey and holy.

How to make a sourdough starter

There are a lot of myths surrounding the creation of a starter, but it’s a simple process: all you need to do is mix (ideally organic) flour with and equal weight of (ideally chlorine-free) water. It is possible, however, to make a starter with pretty much any flour and basic tap water. For the sake of practicality, at Bara Menyn we use organic flour and tap water, but then the water here in west Wales is comparatively clean, although I’d much rather be using spring water straight from the earth.

These microorganisms will begin to feed and reproduce. Until the acid levels increase, though, other tiny organisms will also be trying to get a slice of this free meal, which is why it’s important, if you’re making your own starter from scratch, to refresh it regularly for a week or two before use. This process of discarding 80 – 90% and feeding the remaining 10 – 20% with equal quantities of water and flour, and then leaving it to ferment for 24 – 48 hours before refreshing again, will help to weed out unwanted microorganisms and give the ‘good’ ones an opportunity to out-compete the others, until they finally form a thriving, stable symbiotic culture.

As the yeast and bacteria symbionts grow rapidly, they make a lot of gas and the starter swells and rises like an inflating sponge. When they run out of sugars to ferment, the bubbles gradually collapse.

Caring for and using your starter

The culture can only be maintained by you and your careful attention.

In order to understand the stages involved in caring for and using it properly, it helps to distinguish between two related words/concepts: starter and leaven. Starter and leaven refer to exactly the same type of fermented culture of flour and water but many bakers (including me) use them to refer to different purposes for which it is used.

You need to plan in advance of a bake day because, even though none of these steps requires much work at all,  it takes time (roughly 2-3 days) to build a refrigerated starter up to create enough refreshed and fully active leaven. For example, if you want to bake bread on Wednesday if your starter has sat in the fridge for a week since you last baked, the process for ‘waking it up’ and refreshing it into a leaven would be more or less as follows:

Sunday night or Monday morning
Take your starter out of the fridge and let it sit at room temperature (20 °C) overnight, or all day.

Monday night
Take enough of your starter to inoculate (ie introduce yeast and bacteria into) your leaven and discard* the rest. I recommend an inoculation percentage of 20% of the leaven weight. eg if your recipe calls for 200g of leaven, take 40g of starter and add 100g water and 100g flour. This makes 240g. There is 200g to use as the leaven for your recipe and 40g of the starter to store for the next bake.

Leave the refreshed leaven out overnight (roughly 12 – 18 hours) and I would feed the other 40g of starter with 50g water and 50g flour and leave it out for a few hours at room temperature before storing it in the fridge until I need it again.

Tuesday
At some point your leaven should reach its optimum level of activity – one indication is when a teaspoon of it will float in a glass of water. Make up the dough, as per the recipe you are using, and leave to prove overnight before baking on Wednesday morning.

If your starter has sat in your fridge for weeks, say, it may have gone overly acidic and inactive during its long holiday. In this case, you might find it useful to add in an extra refreshment stage before bulking it up into a leaven.

This would involve mixing 40g of the starter with 50g water and 50g flour and leaving it overnight at room temperature to ferment. Repeat this step the following night, before making your leaven. In the example above, you would have got your starter out of the fridge a day earlier, on Saturday, in order to bake on Wednesday.

Fundamentally, when it comes to looking after your starter, it’s about getting into its rhythm, understanding its cycles of rising and falling in relation to its surrounding temperature, frequency of feeding and inoculation percentages. Watch it, smell it, even taste it; come to learn that you’re dealing with a living, breathing entity. Love it – it’s a wonderful thing!

*Better still use it (eg sourdough crumpets or pancakes) or give it away to another baker. [ed]