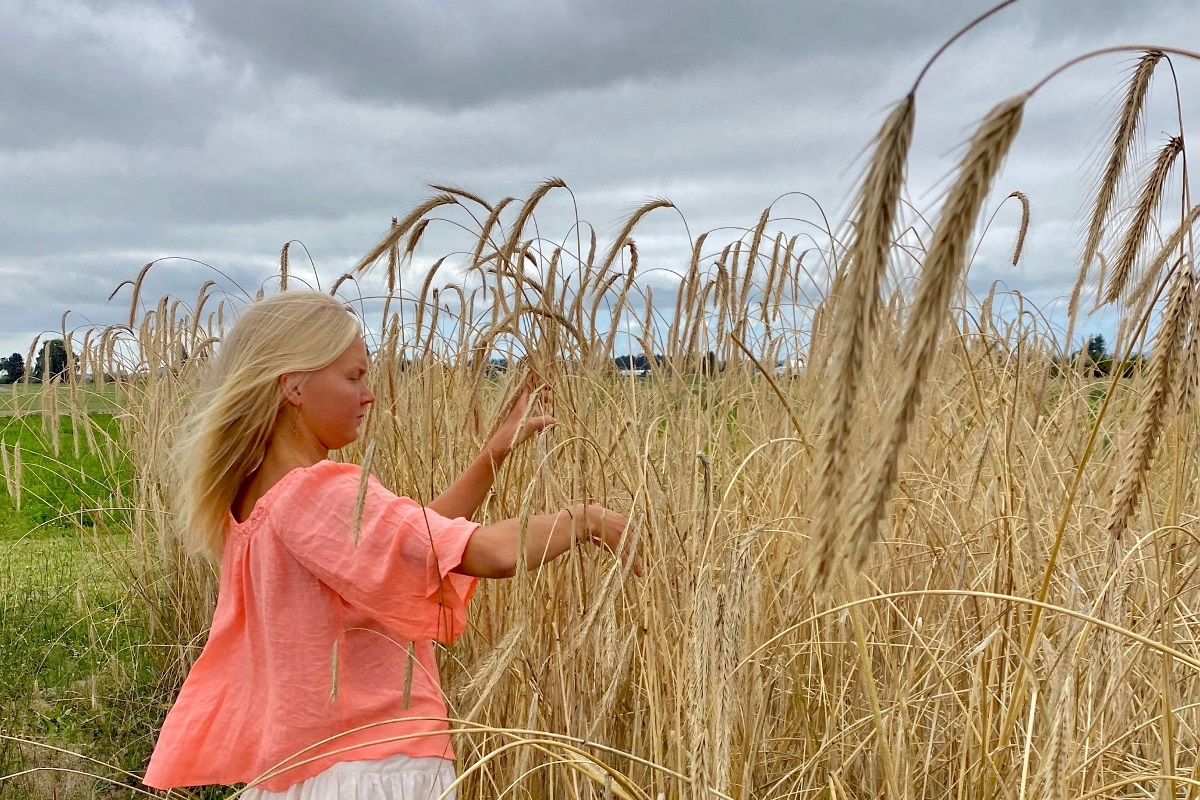 In countries such as the UK, rye production has been in steady decline since the early 20th century. Today rye accounts for only 1% of global cereal production and only slightly more than a third of all rye grown is used for human food. Rye’s tendency to volunteer (shed and self-sow its seed) goes against modern agriculture’s emphasis on the purity of varieties and of monocropping. In the State of Washington, where a lot of wheat seed is produced, rye is even classified as a noxious weed!

Rye has so much going for it, though. It is a valuable cover crop and can play an important role in crop rotation. Culinarily, it has many applications beyond the dark, dense, 100% rye sourdough that people from northern and eastern Europe love so dearly.

Me, myself and rye

It was 2015 and my final week in Cambridge - a place I had been lucky to consider my home for three years as an undergraduate student - when one of my fellow Estonians living in the town invited me over. We had met only once and I had no idea what we were going to talk about. She held a PhD in Molecular Biology from UCL and I was about to get my BA in Social Anthropology but I hoped that our common language would make it easier for us to find things to discuss. Our conversation ended up being focused on sourcing locally-grown grains, the advantages over industrially milled flour of flour milled at home on a countertop mill, the bacterial composition of sourdough starters, the scalding technique in making rye bread and the role of rye sourdough in Estonian cultural heritage. To say it was a niche conversation would be an understatement but then again, we were students in Cambridge…

Back in my college room, I phoned my mother in Estonia and recommended that the next time she bakes bread, she should scald some of the rye flour (ie mix with boiling water) for a sweeter loaf without adding any sugar. I wondered about getting a countertop mill, but reached the conclusion that getting freshly stone-milled flour delivered to my door step was a pretty good deal already.

After uni, I moved back home with my mother and younger brother, as would be expected from a typical example of the generation of boomerang kids. I kept on eating and occasionally baking rye bread, but did not really give all the specific rye-related topics much thought.

Fast forward five years and there I rarely have a conversation in which rye does not get a mention. I have been a PhD student at Washington State University’s Bread Lab in Skagit County, WA on the western coast of the US for almost two years now. I did not come here to study rye - my intention was to master the art of baking crusty wheat sourdough bread with a large, open crumb structure. Now, though, we post photos on Instagram hashtagged with #deathtocrumbshot and everything I cook or bake that has flour in it contains at least 50% freshly-milled, unsifted rye flour. I have heard more rye puns than there are rye varieties out in the world. If I had a business card, it would say ‘rye-searcher’.

The work done at The Bread Lab is truly all-encompassing, holistic and ethically sound. The current projects focus on wheat (including coloured varieties and perennials), rye and barley. I am partial to rye The hardiest of all the crops, rye was originally a weed, native to the mountainous areas of contemporary Turkey, so resilience is second nature to it. Rye gradually came to dominate the grain fields as people migrated northwards where conditions were too harsh for wheat to thrive. Rye does well in less fertile soils and is relatively tolerant of frost and drought. The latter is due to its well-established root system. Over the course of its growing cycle, the rye plant uses 20—30% less water than wheat. Rye has allelopathic qualities, meaning it releases chemicals into the soil that suppress the growth of weeds.

Sowing and growing in Skagit Valley

At The Bread Lab we have a sizable seed bank of various small grains. To see how the germplasm translates into plants and later baked goods, we sow seeds into the fertile soil of Skagit Valley twice a year. We sow winter varieties in October, just before the rainy season begins, and spring varieties in April, when the fields are yet again dry enough to be accessed with a tractor. Some seeds are ordered from other gene banks around the world. Others might be the result of successful crosses in greenhouses or of evolutionary breeding - years of selection in the fields by the breeder in collaboration with natural selection. Most often, it is the combination of all of the above. Instead of genetic purity, we place the highest value on diversity, as it is the cheapest and most successful security policy against the unpredictable changes in climate. As our field trials are all organic, there is always some weeding to be done, be it on the sombre days of ‘Junuary’ - June here often resembles January - or in the blazing heat of late July.

In winter, thousands of snow geese and swans visit the fields. Spring - signalled by their departure - can suddenly seem lonely. Year-round there is always something to observe, to note, to ponder. Being in the fields amidst the growing grains is grounding, it reminds us of the continuity and circularity of life. Times can be tumultuous, but the wheat, rye and barley keep on growing to produce seed.

Thanks to their hollow, yet sturdy, golden stalks even the tallest rye varieties we have grown - approaching eight feet high - mostly managed to stay upright throughout the summer that brought many windy nights. For more than 10,000 years, fall has brought harvest time for many people around the world. It is powerful to be part of this agricultural lineage, but it also makes one more humble, as there are always forces more powerful than us at play. We walk the fields not only to admire and philosophise, but also to select seeds from the plants that have features we consider favourable - shorter stature, disease resistance and larger kernel size, to name a few. Those specimens with the least potential we may leave into the field. Others get harvested, either with the combine or by hand with a sickle, and then threshed, cleaned, put into bags or jars and labelled.

We will use some of our harvest for baking to see whether the plants we have selected are not only good to grow but also good to eat. The lab has a stone mill and all the equipment that the best bakeries in the country have. We bake breads of various kinds, cookies, biscuits and cakes - and we get to eat them too! Of course, we also share them with other people, provided they are willing to give constructive feedback. We also test the varieties for various parameters, such as nutritional composition, Hagberg Falling Number* and rheological properties – how the dough flows. For some factors, though, tastebuds tend to have more credibility than machines of steel and glass - after all, we work with cereal grains that are destined to become food. We keep on replanting varieties that taste the best until we have enough seed to share with farmers, so that they could keep on feeding people in their communities with the tastiest grains.

It’s true that the baking properties of rye differ from that of wheat - it does not develop gluten the way wheat does, for example. Thus it is often dismissed in places where the norms and quality standards have been established according to the properties of wheat. That doesn’t mean rye has no place in baking, though. Rye flour can add a lot in terms of texture and flavour to many baked goods.

Historically, a mixture of wheat and rye seeds were often grown, harvested and milled together, resulting in bread known in the UK as maslin and méteil in France. Part of my fieldwork focuses on studying these mixes. I am calling it ‘going against the separation sciences’ and hope this will be the future.

*Named after one of its Swedish creators, the Hagberg Falling Number (HFN or just FN) is the international standard measure of alpha-amylase activity in cereals. The lower the HFN, the more alpha-amylase the grain/flour contains, often as the result of pre-harvest germination in cold, damp weather. This causes starch damage, which has a negative impact on breadmaking quality.

Published in November 2020 as part of the Rye Smiles season, run by Rosehip + Rye, Karaway Bakery and the Real Bread Campaign.