Unsatisfied at boiling everything that Companions Real Bread CIC does down to two headings on a report, founder Maggie Rich decided to find a better way of talking about their work. 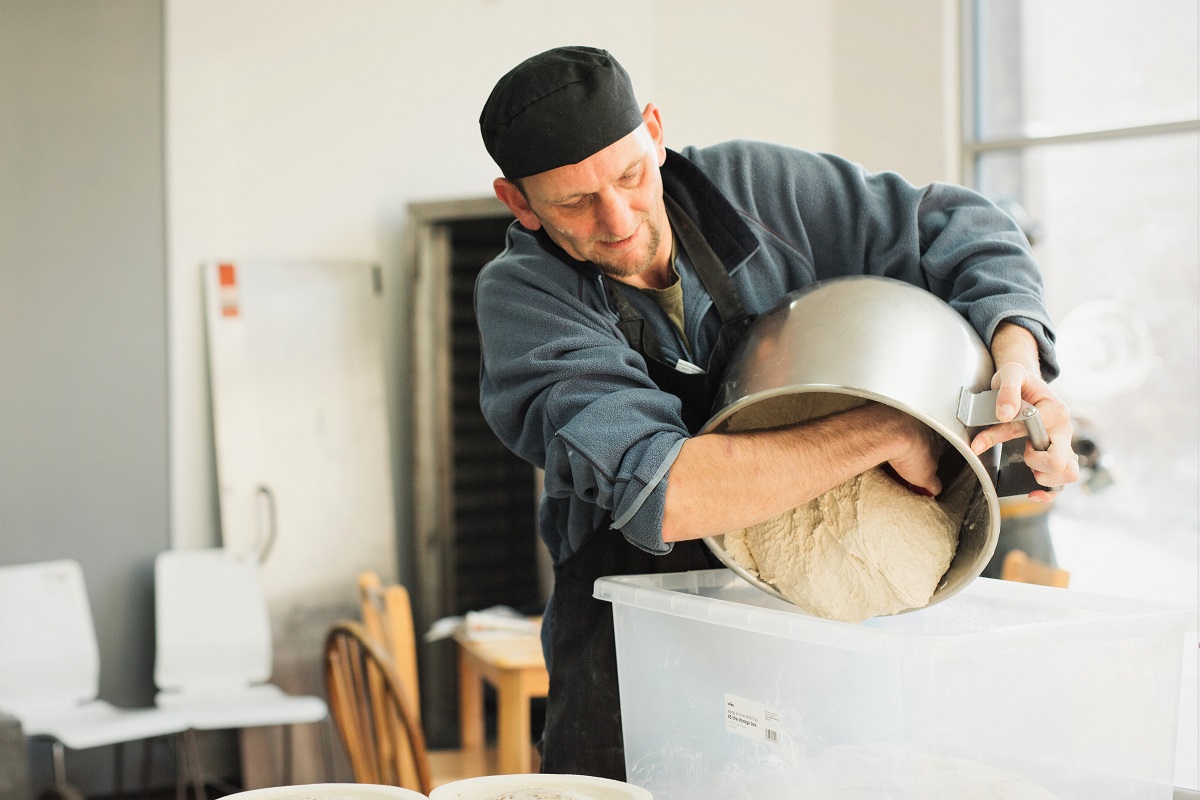 Under the strapline of Honest Bread, Honest Lives, we make Real Bread more accessible to the people of Bedford, and support ex-offenders through bakery training and employment opportunities. Reducing and dividing everything we do into these separate two raisons d’etre seemed to make speaking about our work a bit clunky, though, so I devised a talk to draw them closer.

At the start of baking classes that we run, I begin by exploring the different elements that led to me setting up Companions Real Bread. Even before the closure of the not-for-profit befriending project I used to manage, I’d started thinking a business might be able to offer more effective support. I read a book called I am Somewhere Else by Barbara Glasson, a Methodist minister who started making bread with people as a way of building community. I also heard a BBC Radio 4 Food Programme about microbakeries, which taught me that you could make Real Bread at home for sale.

These combined to make my ‘starter’ and I whip out my sourdough culture to illustrate the point. Fizzing with energy, I took Andrew Whitley’s Baking for a Living course at Bread Matters and started baking once a week from home, gradually building up a delivery round and learning how to run a business. My Real Bread tasted great but it took a whole year to make it look good enough to sell, and still it was fingers-crossed. I still thank those customers who bought week in, week out, even when the loaves were nearly as flat as a pancake!

Next, I add flour, water and salt to an overnight sponge, then show the unattractively stodgy result to the volunteers.

At first, people who come to baking classes tend to be shy and awkward, making numerous mistakes before relaxing into each other’s company and becoming comfortable enough to check instructions or ask questions. I talk about a past volunteer who would stand sheepishly doing nothing, until I suggested that if he’d finished the job he’d been given, he might look round to see what else needed doing. He took to keeping the place tidy and moved in alongside our baker to learn how to help. Soon, he morphed before our very eyes into an energetic and competent assistant. He started disappearing to job interviews and eventually came back to tell us: “It’s down to you that I got this job – you gave me the confidence to start applying again.”

By the time I’ve finished talking about him, the flour, water, yeast and the salt have started relaxing into each other’s company and are now visibly unifying to create a smooth dough with a bit of stretch.

I start to knead, explaining that this helps develop the gluten and makes the difference between a loaf that barely holds together to serve its purpose, and one that is beautiful, gloriously fulfilling the true potential of its individual ingredients. Put under pressure as a team, we develop strength and resilience and discover what we can achieve. Guards come down, vulnerabilities are revealed – but until that happens we can’t give the help and support that is really needed.

When asked to do something, one volunteer would always reply: “I can’t do that!” But when he saw that his contribution was really needed, he learned to say: “I’ll give it a try.” Two years ago he was a homeless alcoholic on the streets. When he came to us as a volunteer, he had given up drinking and was in shared hostel accommodation. Now he’s a part-time employee with his own flat, who says with a big grin: “I can do that!”

Showing a good stretch now, the dough is set aside and allowed time to prove. Lactic acid bacteria in the sourdough starter culture get to work, partially breaking down the gluten and reducing the phytic acid. These, and a whole range of time-dependent changes result in real Bread that is nutritious, flavoursome and might also be more easily digested.

People need time too - to be listened to and heard, understood, and recognised as individuals with their own positive contributions to make. Depending on their particular constitution and environment, the time needed is shorter or longer, just as it is for dough. One volunteer was only with us for two weeks after release from prison before he was back into full-time work. “That short period with Companions was essential for my rehabilitation,” he said.

When we bake bread, we set it free to become its own thing of beauty, away from our influence.
I like to think that, when I shape bread, at some point the dough realises it’s going to be a loaf. When I first started working with prisoners, I’d ask them what they liked doing. Too often the reply would be, “I don’t know!”  Either addiction or abuse had robbed them of the chance to know themselves.

Working in our safe space, in a team that values not just their effort but who they are, our volunteers begin to consider a bigger future, an ordinary decent life, to discover what they like doing and maybe do some of those things. One chap confided that, for the first time in years, he could imagine actually going out to work. We now employ him for a few hours a week and, ideally, we’ll help him move on to make a go of a job elsewhere out there in the bigger world.