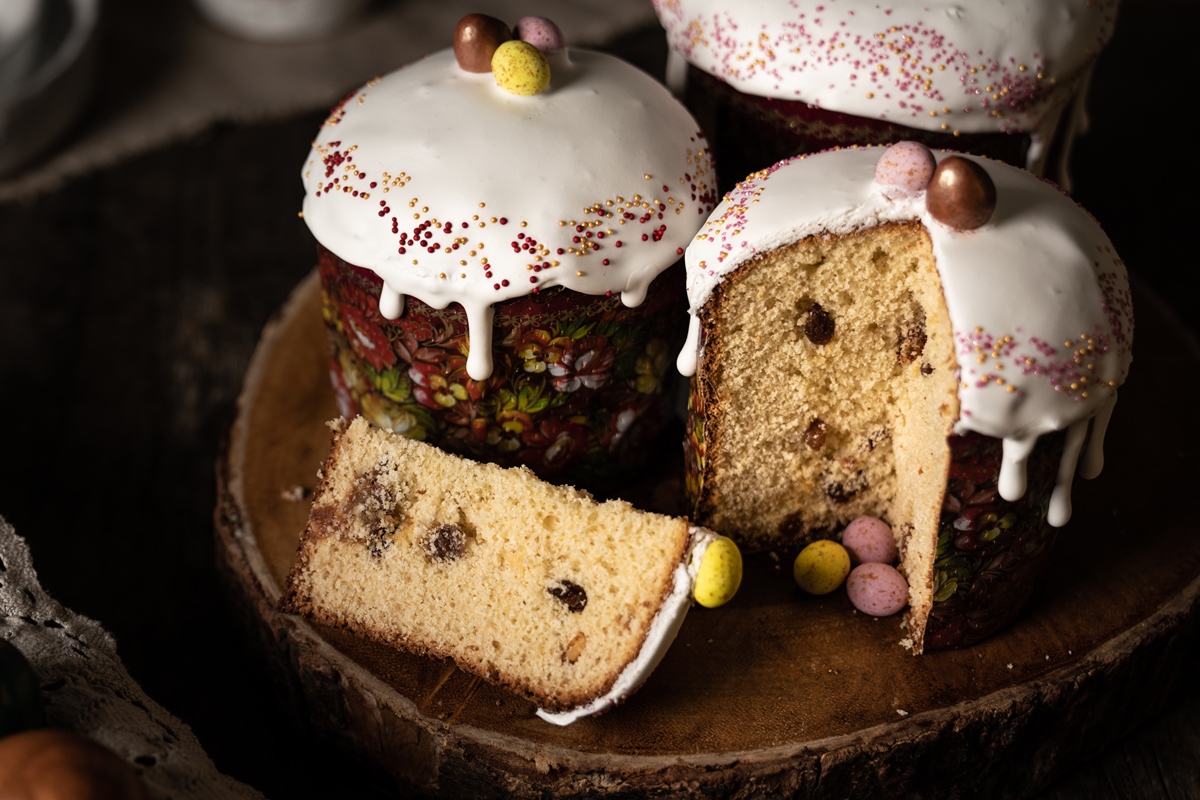 While Easter celebrations vary between Christian cultures, the festive table is usually crowned by a cake or sweet bread. This is certainly true of Orthodox Christian celebrations in Ukraine, Belarus, Russia, Romania, Bulgaria, Georgia.

Kulich is a tall, fragrant, brioche-style cake, studded with raisins and sometimes candied citrus fruit, which is usually glazed and sprinkled with colourful sugar decorations. Traditionally baked in cylindrical tins, such as large coffee or juice cans, nowadays you are more likely to see it baked in paper panettone cases, which is what we use at Karaway Bakery.  Kulich is a symbol of atonement on the cross by Jesus, which also symbolises the body of Christ. The shape of kulich represents the dome of an Orthodox church.

Traditionally, family matriarchs bring their home-baked kulich to church, where it is blessed by a priest.  The blessing ceremony of food for the Easter table in Orthodox churches is a special experience for the families gathered. Families bring woven baskets, packed to the brim with food to be served as part of the first meal after the long and strict Lent. In the basket there is always at least one kulich, some decorated hardboiled eggs, paskha (see below), meat and wine. The priest blesses the food during the main Easter service in the warmth of the candle light and church choir singing. Kulich is served for breakfast and for dessert during the forty days following Easter until Pentecost.

There are several theories about the history of kulich and where the tradition came from. Some ethnographers claim that it originated in the pagan times, when a sweet rich bread was baked at the beginning of spring as a sacrificial loaf for the good harvest, symbolising fruitfulness and fertility.

Another quintessential Slavic Easter dish, often served with kulich, is pashka or paska, as it’s called in some parts of Russia and Ukraine.  Curiously and confusingly, the word paskha is used for both kulich and the curd cheese dessert, depending on where you are. In the south of Russia and Ukraine both are called paskha, with the latter differentiated by the word syrna - cheese.

Essentially the dairy version is an airy, cheesecake-like mixture made from tvorog (cow’s curd cheese, somewhat reminiscent of Italian ricotta), eggs and sugar. There hundreds of variations of pashka, some of which are baked. It can be enriched with sour cream, butter and often infused with saffron. The basic principle is for the mixture to be poured into a special pyramid-like mould and allowed to drain overnight. The sides of the mould may have the Cyrillic letters ХБ on its sides, which stand for Xристос Воскресе – ie Christ is Risen. The following day the thickened mixture is taken out of its mould, revealing the sacred lettering, decorated with nuts and candid fruit, then taken to church with the kulich and painted eggs to be consecrated.

Paskha is delicious when spread on a slice of kulich – especially after a challenging seven-week Lent!