From design studio to dough trough

Of course, the French have a sexy word for it, says former architect, Marc Rawcliffe, of his transition to becoming a peasant baker in rural France. 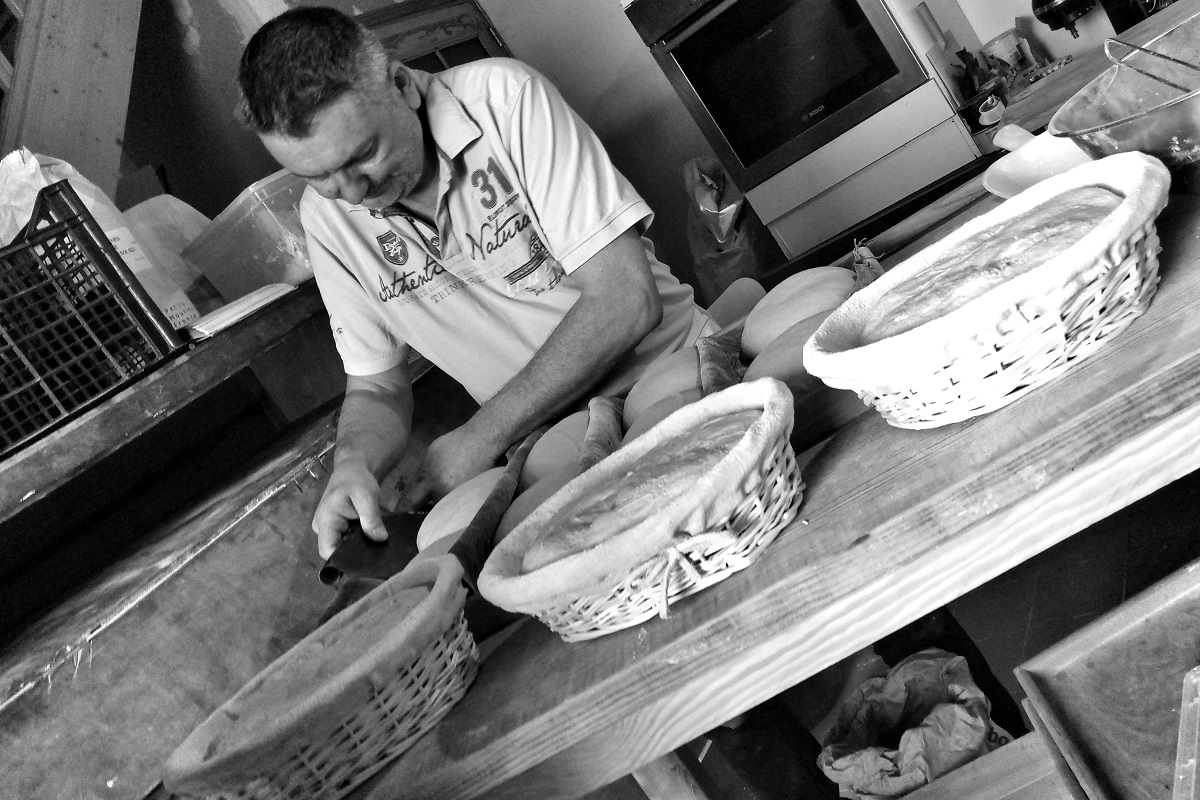 To me at least, reconversion professionnelle sounds sassier than career change. I am a northern Brit in his mid-fifties, who trained in gritty Liverpool and Birmingham to be an architect and ended up as a specialist consultant working in London. It had glitz (with a hint of social and healthcare feelgood factor) and I received awards, including one from The Civic Trust.

After nearly 30 years of all that, I now find myself in western France, with arms deep in freshly-milled white powder. I am working as a paysan boulanger (peasant baker) at the Rousseau family’s organic farm EARL Saint-Germain, where I bake three days a week for Pain de Mathilde, which sells bread to local schools and through two farm shops. I am also developing my own microbakery, Pain de Dilay.

I originally became interested in bread making back in the UK because someone told me the smell of fresh bread was wonderful in the morning. I invested 99p in a bread machine from eBay and set off on a journey that has changed my life completely.

I moved onto making sourdough by hand and when I moved to France in 2010, Karl (my starter) moved with me. My assumption had been that bread here would be so good that I would not need to bake much. I soon discovered that, due to reasons including franchising of boulangeries by large chains and increasing supermarket dominance, that the Real Bread industry had been savaged here as well. Happily, we don’t have too much of the Chorleywood ‘wunderloaf’ here, but I don’t think it’s an exaggeration to say that around 75-80% of what is sold as ‘bread’ here is probably full of additives and/or made in a way that takes away much of the possible goodness and leaves little taste.

I now live in a very small village, with a wonderful, parochial community of people who show a great belief in (and support for) our local products and businesses. Being in the Deux-Sèvres in Nouvelle Aquitaine, we have the terroir and capacity for wonderful agriculture. My love for bon pain became aligned with a passion for sourcing high-quality, locally-produced ingredients, which now are of paramount importance to me. It hurts me to see people (even some of those I work with) buying organic ingredients from Kenya when there are some fabulous local options.

I developed a kind of obsession, researching local bread making traditions and looking around at what others were doing. I started to seek out bakeries that used levain and found there were very few in my area. Some of those I did find were run by organic farmers, who also milled their own flour and made their own breads on the farm. Like me, these paysan boulangers were passionate for a true loaf, and were using ancient, traditional methods to produce some wonderful bread.

My obsession became my profession at the end of the summer of 2017, when my architectural consultancy workload shrank rapidly due to the impact of the Brexit vote on overseas investment. Also at around that time, making some loaves to take to the village picnic led to a requests from neighbours along the lines of: ‘could we have your bread every day, or at least every week?’ Over Christmas 2017 and into the New Year, I reflected and prayed about it all. I came to the conclusions that I didn’t need to prove anything else in architecture and that my family was more important than struggling in a financially-challenged career.

Then a miracle happened: I saw an organic farm’s advert for a part-time baker making pain au levain with their own cereals. There were three problems, however: The job was over an hour away, they wanted a qualified baker (you have to have a diploma to be a boulanger in France) and the pay would be the minimum wage.

Clearly this was my job, though, so I applied with my architect’s CV, a statement expressing a little of my passion, and photographs of bread I had baked. Amazingly, I got an interview, followed by a day’s trial. I think they thought I was an eccentric Englishman, who’d be put off by the trial, but I loved it. Within a month I was doing everything on my own and producing around 350kg of bread a week over three long days.

Every day is different as the levain, humidity, temperature and so on affect the whole process. The 100% hydration liquid levain we use is very active, so we go from mix to bake in around four hours. This might be a shock to some sourdough bakers, but we produce some beautiful, great-tasting breads. The aim is for a subtle taste that is wholesome and healthy. I have learned lots more about the craft, but also have been able to contribute what I had learned myself over several years of home baking on a smaller scale, so we are all benefitting.

Meanwhile, my own Pain de Dilay has developed from baking four loaves to give to neighbours, to being registered as a microenterprise. I use flours from the independent local mill, Freres Thibaud in La Chapelle Thireuil Minoteries, and now sell around 11kg of my basic, slowly-fermented (mix to bake in around 14 hours) loaves very locally in the gâtine. I also bake a special loaf each week, such as my favourite made with a local goat’s cheese and sun dried tomatoes; or brioche with eggs from our chickens, milk from the farmer next door and butter from nearby Pamplie. I am working to build this up gradually to a sustainable maximum three days a week.

My previously sedentary body has been subjected to hours of standing, lifting, carrying and all sorts of physical action. You would think my friends and relatives and family would be shocked and think I’m crazy, and in a way they do.  They also see the passion in my eyes and when they taste the freshly-baked (or even the still-tasty four-days-old) naturally-fermented bread they smile and nod and understand. Several have even asked to come over to my fournil (bakehouse) and spend time with me learning how to make pain au levain - again, sounds sassier in French.

There are complications (including not having a French diploma, Brexit, and my fournil not being sufficient) but seeing and hearing the joy as people taste what I am producing, asking for more and telling their friends, is evidence enough that my passion is well placed. It is a pleasure to spread my passion and to know that people go home being able to produce their own wonderful Real Bread and understanding what’s wrong with much of what is sold as ‘bread’ in the UK and (much to my initial shock and horror) here in France too.

In 2014 I married Audrey. She is French and seemed shocked to discover that I baked probably the best bread she had ever tasted, with aromas that reminded her of her grandmother’s kitchen. Audrey has encouraged me greatly on this journey, even though she has at times struggled with my ability to get flour and dough everywhere and my parallel inability to clean it up properly.
Even though it will not generate anywhere near the same income I enjoyed as an architect, the personal reward and the social benefit of being a Real Bread baker massively outstrips even a Civic Trust Award.

If you are thinking that your baking is becoming more and more a passion for you, but you could never make a business out of it, my advice is go for it and make that reconversion.