The grain in Maine… 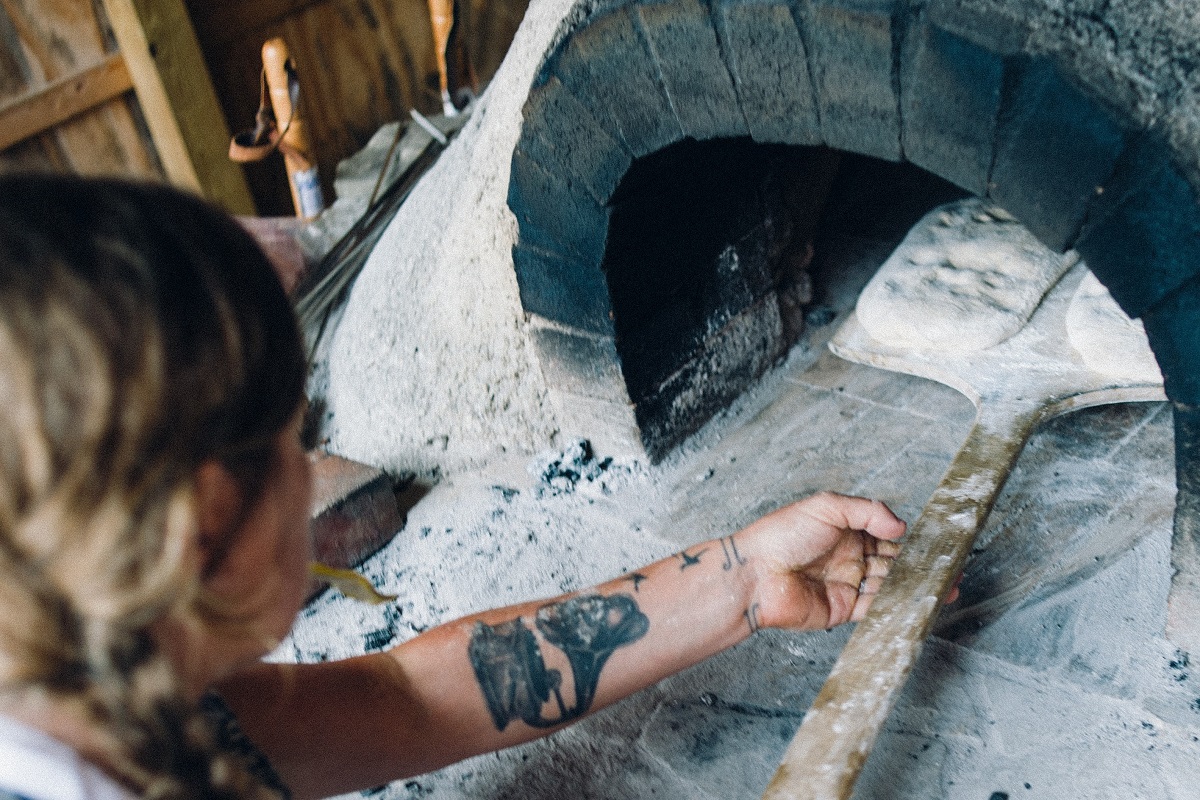 The trip from Gloucestershire to Kneading Conference is long. Fly from the UK to Boston, travel three hours on a bus to a town where a kind person will pick you up and take you to Skowhegan in the middle of Maine another hour away. It's perhaps not the most obvious place for a major gathering of people, but this town is the hub of exciting initiatives.

I'm visiting as a work study participant. The work study crew do whatever is needed to help the conference run smoothly, from being an ambassador for the Maine Grain Alliance, setting up, serving breakfast to assisting presenters to washing up – a lot of washing up. It's a great way to dip into the sessions and to get to know the presenters without paying the full conference fee.

This year the conference is spread across the Skowhegan Showground. Bread is baked in one of three mobile bread ovens loaned by the local Maine Wood Heat, or an oven created by David Neufeld in the back of a horse box. Horse boxes are ideal for mobile ovens apparently as the weight is at the rear of the vehicle. I so want one of these so I can roam the country baking!

Around 250 people attend the conference, mostly from the US and Canada. It is held over two days except for one workshop which runs for three. There are participants who are thinking about a new career; professional bakers, academics, farmers and many who are just bread fanatics. Several thousand people visit the Bread Fair held on the day after the conference where breads made during the conference are sold. They are joined by 60 other stallholders including bakers.

In the 1800s, wheat used to feed more than 100,000 people in Maine, but today most of the wheat required is grown outside the county. In 2007, a group of Skowhegan residents identified that addressing wheat production was an important part of a growing local food movement and set up the first Kneading Conference in Somerset County.

By 2010 the group had become the not-for-profit Maine Grain Alliance. Its aim is three-fold: baking and grain education; technical assistance and heritage seed restoration. As part of this trials have been taking place to find grains that are best suited to local conditions. An example is an Estonian wheat called Sirvinta, which is growing well in the area. Trials have also shown that winter wheat grown in spring is far more suitable for the climate

In 2007 there was nowhere to process the grain. After many years planning and lobbying, a grist mill was set up in the heart of Skowhegan in what was the old jailhouse. It produces 2000lbs of stoneground flour in an eight hour day from wheat, oats, corn and buckwheat. Grains are sourced from Maine and from other northeastern farmers. There's plenty of synergy. The need for organic hay in the dairy industry has led to grants being made to farmers and boosted growing of grains for bread.

The mill has the newest equipment of any I have visited so far. It's from Austria and housed in beautiful blond wood. All flour produced is wholemeal and not sifted. It is sold to businesses between Maine and New York and into colleges in Maine where scratch cookies made with the flour have replaced shop bought versions.

If you'd like to learn more about the grain movement in Maine, read Amy Halloran's book The New Bread Basket. She took her love of flour back to the field and writes about the people who are trailblazing new paths to beer and bread. Well worth reading.

With a full conference programme, it was difficult to choose which workshops to attend. I definitely discovered some new bread heroes:

The keynote speaker was Real Bread Campaign supporter Kimberley Bell from the Small Food Bakery in Nottingham, who was named best food producer in the Radio 4 Food and Farming Awards in 2018. She introduced us to the concept of agroforestry where a mix of grain crops and trees are grown in harmony. An unusual mixture of grain varieties grown at Wakelyns in Suffolk has resulted in the flour she uses to create 1/3 of the bread in her bakery.

Daniel de Rosier is a baker from Montreal, Canada. Daniel led a three-day workshop from farm to plate. Participants visited a farm where the heritage grain was growing; milled the grain and then made bread. I managed to dip in a few times and learnt some techniques I am dying to try out, particularly how to add grains with little or no gluten successfully into doughs. Not only a really inspiring teacher, he was always ready to help out where a bit of technical help was needed in firing the wood fired or gas ovens.

David Kaminer, owner of Raleigh Street Bakery in Colorado, ran a microbakery workshop. He shared his recipes and methods and his journey to setting up and running his own microbakery and his challenges and successes – so useful to those attending who were considering setting up their own businesses.

Two inspiring women, Kerry Hanney from Night Moves Bakery and Elmore Mountain Bread's Blair Marvin, shared their different methods to make country bread. Blair bakes in a wood fired oven and provides bread wholesale. Kerry had recently changed her methods to give her more of a life balance. It was so interesting to learn how they adapt their work schedule to fit in the way they want to live rather than letting the dough dictate

The presenters certainly get as much out of the conference as the participants trying out the heritage grains in their recipes to see how they work. In Kerry and Blair's workshop for example, they got as excited as we did when they saw how the Maine Grains flour they were using for the first time was working in their recipes.

Make it to Maine

I thoroughly recommend Kneading Conference and anyone can apply for the work study. You'll be guaranteed to pick up tips however experienced you may be. The range and variety of heritage grains being used is astonishing. Most especially you'll meet the most fascinating and inspiring people.