Who sets the agenda?

Learning the lessons from the Responsibility Deal’s failure to tackle junk food marketing and promotion.

This briefing paper examines the Responsibility Deal’s lack of progress on food marketing and promotion measures, to see how the Government’s Childhood Obesity Strategy might successfully avoid repeating such mistakes.

The Responsibility Deal was the Government’s flagship public health policy between 2010-15, encouraging industry to make voluntary pledges on food to “support and enable people to adopt a healthier diet”.

The marketing and promotion of healthier food choices was billed as one of the four “pillars” of the Responsibility Deal. However, the London School of Hygiene and Tropical Medicine’s evaluation of the programme found that “interventions aimed at reducing the marketing of less healthy foods, which are shown to be an effective public health intervention, are absent”.  Professor Susan Jebb, chair of the Responsibility Deal’s Food Network (the body co-ordinating stakeholders from government, manufacturing, retailers, caterers and civil society) has also concluded that “we have given voluntary agreements to control the promotion of unhealthy options the best possible opportunity to fly. Now we need to look to harder policy options to secure progress.”

The Children’s Food Campaign has analysed briefing papers and minutes from the Responsibility Deal Food Network’s own high level steering group to reveal what lay behind the failure to make any real progress on reducing the marketing and promotion of foods high in fat, sugar or salt during the five years of the Responsibility Deal. The Government should draw on these lessons when finalising and implementing its Childhood Obesity Strategy.

Key lessons for the Government 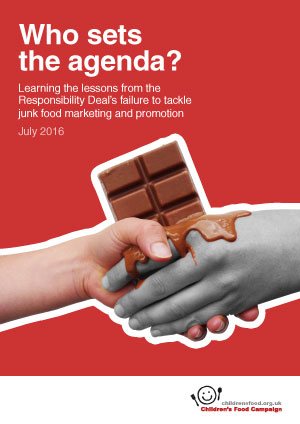