The UK could be opening the door to 119 pesticides banned for health and environmental reasons, warns this report looking at the implications of signing up to the Pacific free trade agreement. The deal with 11 countries, including Australia, Canada and Mexico, risks exposing UK consumers and wildlife to a new suite of toxic pesticides.

This report, which is part of the Toxic Trade series authored by Pesticide Action Network UK (PAN UK), Sustain and trade expert Dr Emily Lydgate, reveals that the deal poses a direct threat to the British public’s health, environment and farming sector. It would also set a dangerous precedent that UK pesticide and environmental standards are up for negotiation in other post-Brexit trade negotiations.

The first report, released in 2020, compared existing UK pesticide standards with those of the US, Australia and India and is available here

The third report, released in February 2022, reveals that ongoing trade discussions between the UK and Brazil are likely to lead to an increase in pesticide-related harms in both countries and is available here.

Though far from perfect, the UK’s pesticide standards are far more robust than those of existing CPTPP members.

UK bans on notorious bee-harming neonicotinoids and water-polluting herbicides and insecticides could be reversed due to pressure from CPTPP member countries, where they are still in use.

Foods such as apples, grapes, wheat, asparagus, avocados and blueberries grown in CPTPP countries are also allowed to contain much higher amounts of toxic pesticides than their UK equivalents.

The report emphasises that CPTPP is a done deal, already agreed by 11 members. By joining, the UK would surrender its power to write the rules, with virtually no scope to amend the treaty to prevent the undermining of UK pesticide standards.

For UK farmers, the report highlights that the deal could spell disaster. It risks cheap food imports produced to weaker pesticide standards flooding the domestic market, undermining UK farmers’ competitiveness. And if the UK weakens its pesticides regime due to joining the CPTPP, farmers will lose their largest export market as UK produce will no longer meet EU standards.

Key recommendations for the UK government: 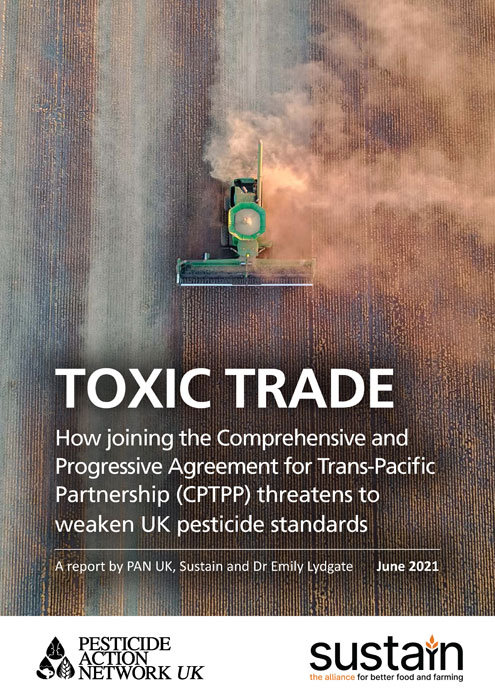