The Ethical Hijack report sets out the case for why the terms 'local', 'seasonal' and 'farmers' market' should be defended from abuse by the food industry. It gives many examples of how these attractive descriptions have been hijacked by food companies and supermarkets to apply to products that do not have the ethical or environmental benefits that these were originally intended to support. It also features case studies from nearly all the major UK supermarkets, as well as a particular focus on the case of Heinz canned soup that claims to be inspired by farmers' markets.

The Ethical Hijack report sets out the case for why the terms “local”, “seasonal” and “farmers’ market” should be defended from abuse by the food industry. It gives many examples of how these attractive descriptions have been hijacked by food companies and supermarkets to apply to products that do not have the ethical or environmental benefits that these were originally intended to support.

The food we eat is being transported further than ever, and there are increasing sales of a wide range of ready-prepared and exotic out-of-season produce. These trends are associated with all sorts of environmental and other problems.

On the positive side, there is growing consumer demand for more seasonal and local food. Two thirds of consumers say they are trying to buy more seasonally, and at least a quarter of visitors to restaurants specialising in ethnic cuisine want more healthy dishes featuring fresh, local ingredients. This is because local, seasonal food is seen by consumers as being fresher, tastier and more nutritious. As the National Consumer Council (NCC) has noted, “Seasonal food can offer better taste and be more affordable, while
local food can deliver freshness, reduce food miles, offer benefits to local farmers and communities and help reconnect consumers with where their food comes from.”

There are many social enterprises, businesses, manufacturers and caterers who are making efforts to use genuinely local and seasonal food. However, as the Ethical Hijack report sets out, their efforts are being undermined by the growing use of terms such as 'local' and 'seasonal' to market foods, often promoted with evocative imagery of local production, that we believe do not comply with these ethical and environmental credentials. We have found many examples of these terms used in ways that could be highly misleading to consumers – with examples from nearly all of the leading supermarkets in the UK. Illustrated examples in the Ethical Hijack report include products and promotions from Asda, the Co-op, Marks & Spencer, Sainsbury's, Somerfield, Spar, Tesco, Waitrose - as well as from food manufacturing brands such as Heinz, Innocent and Robinson's.

The report also features a case study of Heinz “Farmers’ Market” canned soups, launched in 2007 with a £1.6 million television advertising campaign – the kind of marketing budget that local farmers and farmers’ market organisers can only dream of. The range is called “Farmers’ Market”, although the label states that the product is only “inspired by farmers’ markets”, rather than sharing values of local or seasonal food, or being sold direct to consumers by the growers. The Ethical Hijack report identifies such marketing as a flagrant misuse of the term “farmers’ market” which, we believe, attributes qualities to the ingredients that they do not deserve.

We stand in real danger of descriptions such as ‘local’, ‘seasonal’ and ‘farmers’ market’ losing their value, and consumers losing their trust in ethical and environmental messages associated with food. This is likely to greatly reduce their ability to make better choices, undermining efforts to combat climate change and other environmental damage, and to support better incomes for farmers.

What should happen next? 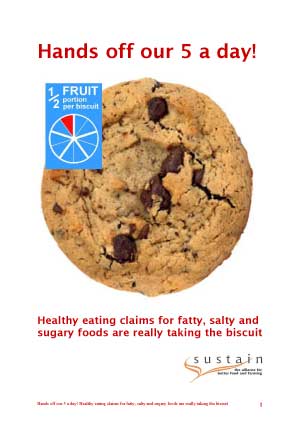 Hands off our 5-a-day! Healthy eating claims for fatty and sugary foods are taking the biscuit

Over the past 10 years, Sustain has worked with the Food Commission and other concerned health organisations to defend the 5-a-day message from...

In many regions of the world, including parts of Europe, water scarcity will be one of the most pressing environmental, social and economic...

This paper explores how sustainability could be represented on food labelling, depicting and balancing a range of sustainability factors such as fair... 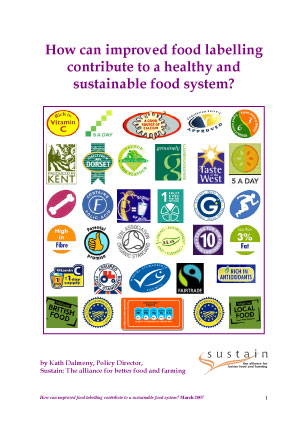 How can improved food labelling contribute to a healthy and sustainable food system?

Food labelling should help consumers to eat healthily and to use their buying power to support sustainable food and farming. However, food labelling...

Cause or Compromise? Survey of marketing partnerships between food companies and health charities

Cause or Compromise reports on a 2002 survey into marketing partnerships between food companies and health charities or medical associations. It was...

Labelling for sustainability: Sustain has worked on nutrition and sustainability labelling issues since the alliance was established in 1999.

Feedback are calling out supermarkets who sell meat under fake farm brand names. They have given Tesco a ‘Total Bull’ award for their...