Behind the scenes at retailers: Recommendations for corporate targets on green issues

The report 'Behind the scenes at retailers' (2009) explores how the UK's leading supermarkets could do more to help their customers buy ethical and sustainable food. It is one of a series of reports published by the National Consumer Council, working with Sustain and the Food Commission, that also measured and reported on supermarket progress across several years on health and sustainability, 2004 to 2009. Links to all of these publications are provided on the "more information" page.

Over the period 2004 to 2009, Sustain and the Food Commission worked with the National Consumer Council to develop and conduct national supermarket surveys, and to develop policy recommendations, on how well the major supermarkets help their customers to buy healthier and more sustainable food.

The surveys rated the UK's leading supermarkets against each other, showing big differences between the supermarkets in terms of their relative progress on health and sustainability issues. This page shows details of a Consumer Focus (formerly National Consumer Council) report that explores how supermarkets could set corporate targets to promote ethical and sustainable consumption (title at the top of the page, link to download the report at the bottom of the page). Links to the other reports are also included below. 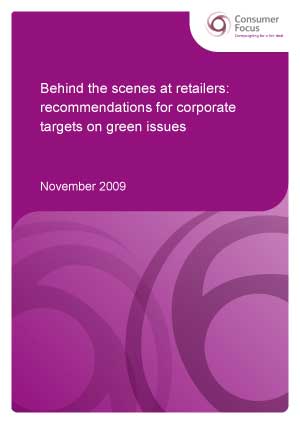 Behind the scenes at retailers: Recommendations for corporate targets on green issues
7pp - 2009 | 310Kb