Sustain has won the President's Award from the Chartered Institute for Environmental Health 'for an organisation that has made a significant contribution to environmental health', highlighting in particular our Good Food for Our Money campaign for health and environmental standards for public sector food. 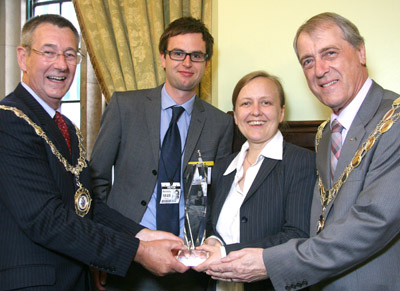 Sustain is delighted to announce that that it has won an award from the Chartered Institute of Environmental Health (CIEH). The President's Award "for an organisation that has made a significant contribution to environmental health" was presented to Sustain: the alliance for better food and farming on 18 May 2011 by CIEH President Stephen Battersby, at a reception hosted in the House of Lords by kind arrangement of CIEH Vice President Joan Walley MP.

Sustain: the alliance for better food and farming has worked closely with CIEH and Joan Walley MP over the past two years, developing the Good Food for Our Money campaign for mandatory health and sustainability standards for food served in public sector institutions such as schools, hospitals, care homes, local authorities and public service organisations. Each year the government spends £1 billion on food for the public sector - including in schools (£320m per year), hospitals (£300m per year), care homes and the armed forces (£195m per year). The Good Food for Our Money campaign, backed by over 60 national organisations, is calling on government to introduce mandatory health, animal welfare, ethical and environmental standards for this food.

"Sustain is delighted and honoured to accept this CIEH President's Award on behalf of all our members and supporters," said Kath Dalmeny, Sustain's Policy Director. "The Sustain alliance, of which CIEH is a valued member, promotes policies and practices to support a safer, healthier and more sustainable food system. At a time when there is so much concern about climate change, natural resource use - such as declining fish stocks - and the nation's health, it is important to celebrate the progress that has been made in putting food firmly on the government and industry agendas."

"CIEH's help has been invaluable in refining policy and gaining support in Parliament, particularly in the drafting and promotion of the Public Bodies (Sustainable Food) Bill championed by Joan Walley MP," said Alex Jackson, coordinator of Sustain's Good Food for Our Money campaign. "Applying robust standards to food bought with public money is important to demonstrate leadership, build a better market for healthy and sustainable food, and take decisive action to improve the food system and the nation's health."

For details of Sustain's work to improve food standards, in the public and private sectors, see: