Shops, restaurants and catering companies that sell food in NHS hospitals have been rated for their commitment to healthy eating.

Compiled by health campaigners, the new league table ranks high-street brands in order of how well they meet NHS England targets on healthy checkouts, food advertising and price promotions in hospitals. The Royal Voluntary Service comes out top in the Healthy Hospital Food League Table, whilst Subway and Burger King sit at the bottom of the rankings for failing to meet NHS targets for promotion of healthier food.

High street brands like Costa, M&S and Starbucks are now common in hospitals across England, serving food to patients, visitors and 1.3 million NHS staff. The Campaign for Better Hospital Food has today produced a competitive league table comparing such companies for their commitment to promoting healthier eating.

First place goes to the Royal Voluntary Service (RVS). RVS come top of the league table for meeting all of the NHS England healthy eating targets in advance of the deadline, and gets special recognition for going one step further and rolling out the higher Scottish NHS healthcare retail standard across all 220 RVS shops in English Hospitals by March 2018. 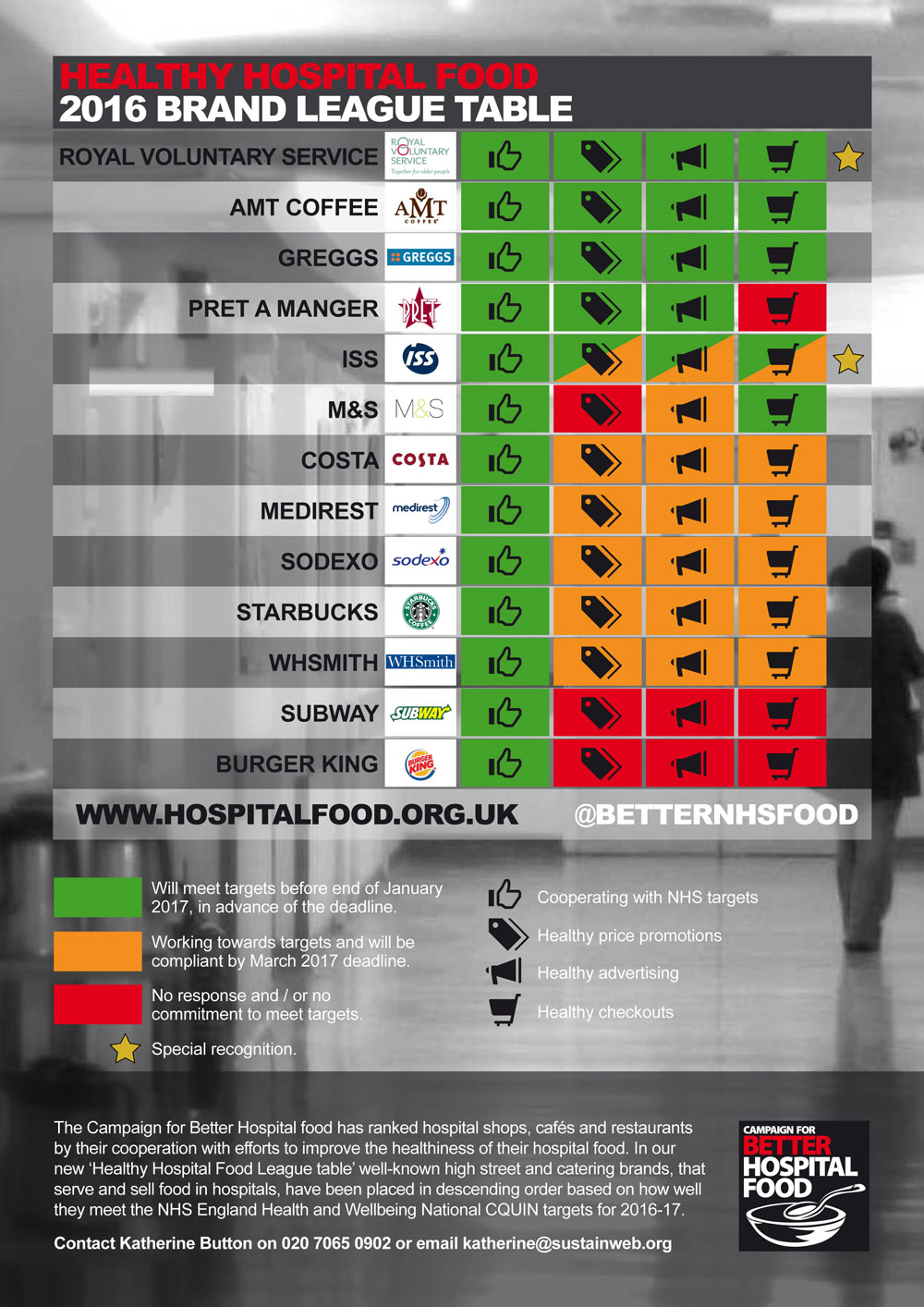 “As a responsible retailer and NHS partner, we are proud to be top of the Healthy Hospital Food League Table as it recognises our commitment to ensuring all of our cafés, shops and trolleys include healthy options to encourage people to eat well.”

Katherine Button from the Campaign for Better Hospital Food said:

“It's disappointing that subway and Burger King alone, out of all the major brands serving food in hospitals, are the only two we found not to be working towards NHS England targets on promotion of healthier food. The healthier option should be the easier option in hospitals, and at the moment Subway and Burger King appear to be holding back moves towards a healthier NHS. And through their formal partnerships with hospital caterers, they are also appear to be holding back those caterers from doing better in the Healthy Hospital Food League Table.”

“This league table draws attention to the behaviour of big food brands and holds them to account for failing to ensure they play their part in excluding less healthy food promotions from hospital premises. We applaud the efforts of the Royal Voluntary Service and we’re pleased that so many brands will meet the NHS England targets for healthy food we fought so hard to secure. However, the disappointing lack of engagement from major brands like Subway and Burger King in meeting NHS targets shows there is still work to do.”

In a disappointing result, sandwich retailer Subway - who have 12 Subway stores in hospitals - has failed to meet three out of the four targets for promoting healthy food and so flounders at the bottom of the league table with Burger King, which still has one fast-food outlet remaining in Addenbrooke's Hospital in Cambridge. Neither of these brands have cooperated to meet food promotion targets set by this NHS England initiative to make the healthier options the easier option when buying food in hospitals.

At the other end of the league table, encouraging success comes in the form of the high-street bakery Greggs, which commits to meet all the targets early for its single New Cross Hospital shop in Wolverhampton. It is a mixed result for M&S, with 21 hospital stores, who score highly in healthy checkouts but have not committed to the target for healthy price promotions. Meanwhile the newsagent giant WHSmiths, present in 85 English hospitals, did better than expected, committing to meet the NHS England healthy eating targets by March 2017.

In the battle of the sandwich and coffee shops, AMT Coffee just pips Pret a Manger to the top spot for their AMT Coffee shops in Guy’s and St Thomas’ Hospital in London. Pret a Manger scores highly for its John Radcliffe Hospital outlet in Oxford, but, despite promoting a healthier food philosophy across most of the shop floor, Pret a Manger was let down by its policy of displaying high-fat baked goods at the till points, which means Pret a Manger won’t be able to meet the healthy checkout target. Costa and Starbucks bring up the rear but told the Campaign for Better Hospital Food they will still aim to meet the March 2017 deadline.

Dr Susannah McWilliam, spokesperson for Food for Life, Soil Association, a supporter of the Campaign for Better Hospital Food, said:

“Hospitals retailers now have an important set of targets in the drive to promote healthier food and drink for staff and visitors through NHS England’s Staff Health and Wellbeing CQUIN. The Campaign for Better Hospital Food continues to shine the spotlight on food in hospitals – food that should be supporting good health for all. This new league table celebrates brands that are working hard to meet the new CQUIN targets and will encourage those who are failing to up their game and support healthier food for the 1.3 million members of NHS staff and all others using hospital forecourts.”

Liz Atherton, a dietitian and food policy officer with the public health charity Medact, a supporter of the Campaign for Better Hospital Food, said:

“Sixty two per cent of the UK population is overweight or obese, yet up until now food retailers and caterers within the NHS have been able to promote foods high in salt, sugar and saturated fat. Hospitals must not be financially penalised because external food retailers and caterers fail to comply with NHS England targets. Medact fully supports the campaign’s efforts to hold these private organisations to account."

1. What are the Healthy Hospital Food targets?

NHS England calls these national mandatory targets the Health & Wellbeing CQUIN (Commissioning for Quality and innovation). These targets mean that every shop, café and restaurant operating on a hospital site was asked by NHS England, before the start of this financial year, to do the following, before the end of March 2017:

Sellers that do not meet the national mandatory targets will trigger NHS England to withhold part of the budgets of any hospital where that seller has a presence.

The Campaign for Better Hospital Food, run by a group of food, medical and health organisations, fully supports any initiative to encourage a more health conscious approach to the food sold on NHS hospital sites. Improving the food environment in hospitals benefits the health and wellbeing of the whole hospital community; including patients, staff and visitors.

2. Our scoring system:  How are points awarded?

To encourage uptake with the standards the Campaign for Better Hospital Food has awarded shops, cafés and restaurants - operating in hospital sites – with ascending points for how well they meet each Healthy Hospital Food target, as follows they:

*Bonus points are awarded for additional pledges, including:

(E.g. ISS will go one step further than this and compel their franchise partner brands to meet the targets by March 2017)

3. Commercial caterers that serve food in the NHS – where do they fit in?

The Healthy Hospital Food League Table also lists commercial caterers that serve food in the NHS. Sometimes, these also work in partnership with high-street brands to provide a diverse food offer to patients, hospital visitors and NHS staff. Disappointingly, two very large hospital catering companies, Sodexo and Medirest (part of the Compass Group), were unable to commit to the NHS England health and wellbeing targets fully across their operations. These catering companies have big NHS contracts to supply patient and staff catering in hospitals, and also bring in high street brands for quick service restaurants and coffee shops. The league-table score for each was reduced because partner brands like Subway and Burger King have not committed to the NHS England CQUIN targets.

Meanwhile, ISS, another large catering company that provides food services to the NHS, has won special recognition by committing to have all outlets across their business meet NHS England CQUIN targets, whilst also making sure all the brands they bring in to hospitals, including Starbucks and Costa, to meet the targets by the March 2017 deadline.

“We welcome the new CQUIN guidelines. All Sodexo branded retail outlets in hospitals – which represent around 90% of our total healthcare outlets - already fully comply with the guidelines in advance of the deadline. There are currently nine branded franchises which we are pro-actively working with to try and achieve compliance by March 2017.”

Hospital catering company Medirest (part of the Compass Group) operates in 30 NHS trusts where it runs own-brand catering as well as high street names like Subway and a Burger King, at Addenbrooke's Hospital in Cambridge (contract runs until 2024). Again, Medirest cannot meet the NHS England targets across their business as brands like Subway and Burger King drag down Medirest’s performance on healthy price promotions, advertising and checkouts. Medirest did not wish to provide a statement in response to the Healthy Hospital Food League Table.